Trump Just Tried to Discredit the New Exposé on His Taxes, but Instead He Accidentally Admitted to Tax Fraud 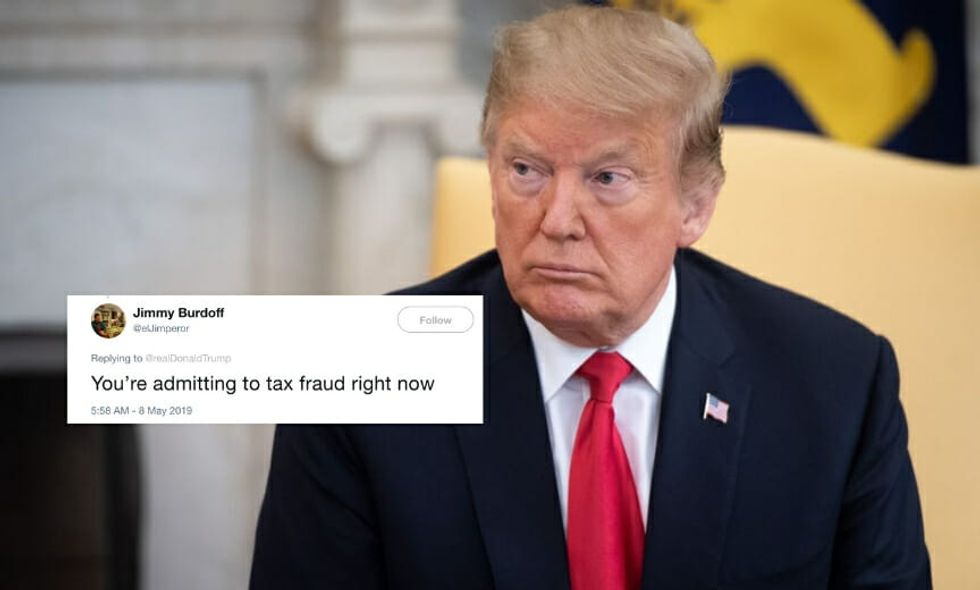 Some of President Donald Trump's tax transcripts have gone public and the president's attempts at spinning the staggering losses he incurred are being laughed out of the room.

A blockbuster report by The New York Times revealed on Tuesday that Trump, who for decades touted himself as a New York real estate mogul, "was already in deep financial distress" at the time he published The Art of the Deal, "losing tens of millions of dollars on troubled business deals, according to previously unrevealed figures from his federal income tax returns."

Trump squandered a sobering $1.17 billion between 1985 and 1994, Russ Buettner and Susanne Craig wrote in their exposé, which they noted is "more money than nearly any other American taxpayer" in those years.

"His core business losses in 1990 and 1991 — more than $250 million each year — were more than double those of the nearest taxpayers in the I.R.S. information for those years," the Times found. "Overall, Mr. Trump lost so much money that he was able to avoid paying income taxes for eight of the 10 years. It is not known whether the I.R.S. later required changes after audits."

"Mr. Trump was able to lose all that money without facing the usual consequences — such as a steep drop in his standard of living — in part because most of it belonged to others, to the banks and bond investors who had supplied the cash to fuel his acquisitions. And as The Times’s earlier investigation showed, Mr. Trump secretly leaned on his father’s wealth to continue living like a winner and to stage a comeback."

Trump saying that "you always wanted to show losses for tax purposes" is striking some people as a tacit confession to tax fraud.

This is exactly why Congress must obtain Trump's tax returns - and why Trump is terrified of that happening.

The President is pretty much saying that he used transactions w/out economic substance to inflate basis, overstate… https://t.co/jVWjXva7pa
— Daniel Hemel (@Daniel Hemel) 1557321811.0

@realDonaldTrump Aaaaaaand you just explained why Ways & Means has a valid reason to examine your taxes.
— Chris Billiau (@Chris Billiau) 1557323399.0

@realDonaldTrump Translation: "I lost a lot of money doing bad investments, so to make up I used tax loopholes and… https://t.co/EylsCEOjCz
— Bas Soijer (@Bas Soijer) 1557322250.0

The jokes came rolling in, and Twitter did not disappoint.

@realDonaldTrump I like businessmen who didn’t lose billions. #LiarInChief #TaxReturns #AlternativeFacts #BiggestLoserTrump
— Nicole B (@Nicole B) 1557314155.0

@realDonaldTrump And there it is. Good morning #BillionDollarLoser
— Jason Haber (@Jason Haber) 1557313072.0

@realDonaldTrump A lot of people are saying I’m the BEST #BillionDollarLoser in the world. Everyone agrees that no… https://t.co/GkXj2lLcwt
— Liar-in-Chief (@Liar-in-Chief) 1557322575.0

Let us not forget where Trump was getting his money around that time, either.

@realDonaldTrump Also it was during this time that Real Estate Developers were putting aside their shady, underworl… https://t.co/uBbmGUqSiI
— sheerahkahn (@sheerahkahn) 1557322687.0

After a string of bankruptcies in the early 1990s, Trump's shredded credit made him unworthy of obtaining credit from American banks, forcing him to turn elsewhere - specifically, Russia.

"For more than three decades, at least 13 people with known or alleged links to the Russian Mafia held the deeds to, lived in or ran criminal operations out of Trump Tower in New York or other Trump properties," Craig Unger wrote in The Washington Post in March.

"I mean that many of them used Trump-branded real estate to launder vast amounts of money by buying multimillion-dollar condos through anonymous shell companies. I mean that the Bayrock Group, a real estate development company that was based in Trump Tower and had ties to the Kremlin, came up with a new business model to franchise Trump condos after he lost billions of dollars in his Atlantic City casino developments, and helped make him rich again."

Nevertheless, Trump's 'successful billionaire' television persona is now thrown into even more uncertainty. Granted, he could simply release his tax returns to clear up any confusion. The problem is, he cannot prove a lie.