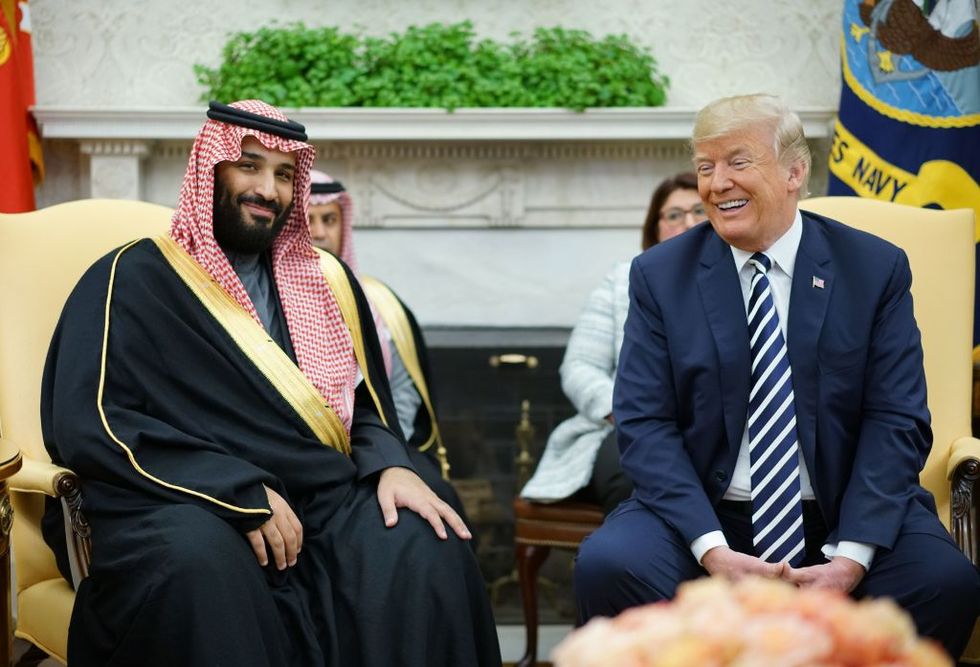 President Donald Trump's refusal to condemn the Crown Prince of Saudi Arabia Mohammed bin Salman for the brutal murder of Washington Post reporter Jamal Khashoggi left Americans shocked. Though the Saudi government has denied it, the Central Intelligence Agency concluded that Khashoggi's murderers were acting on direct orders from the Crown Prince himself, against whom Khashoggi was a fierce dissident.

In Trump's statement on the atrocity, he first demonizes Iran then hails Saudi Arabia then brags about the money he's gotten for the United States through Saudi Arabia. He doesn't mention Jamal Khashoggi until the fourth paragraph.

And while that was disgraceful enough to many, the Wall Street Journal is pointing out a topic he omitted outright.

In the statement, the President, whose infamous campaign slogan was Make America Great Again, gave no attention to the qualities that make America great (spoiler alert: America didn't get great by killing journalists).

The Wall Street Journal said in the piece:

we are aware of no President, not even such ruthless pragmatists as Richard Nixon or Lyndon Johnson, who would have written a public statement like this without so much as a grace note about America’s abiding values and principles. Ronald Reagan especially pursued a hard-line, often controversial, foreign policy against Soviet Communism, but he did so with a balance of unblinkered realism and American idealism. Mr. Trump seems incapable of such balance.

The Wall Street Journal is typically regarded as a more conservative outlet, so the editorial board's bristling of the President left some surprised.

Even the ⁦@WSJ⁩ isn’t having President Trump’s bizarre, rambling statement on the murder of Jamal #Khashoggi or the… https://t.co/7hMzYaVX42
— Andrew Feinberg (@Andrew Feinberg) 1542809868.0

Americans are taking the paper's side, pointing out how starkly Saudi leaders contrast American values and often humanity itself.

Unfortunately, the cruelty in Trump's statement doesn't come as a surprise.

Since long before his candidacy, Trump has relied on Saudi Arabian business to keep his own afloat, with many officials from the regime buying out floors of his buildings and their billionaires buying his yachts.

The president is also hoping to achieve lower oil prices which would require a strong relationship with Saudi Arabia.

But at what cost?

The president's own greed combined with his hatred of accountability of the press creates a perfect storm of selfishness when it comes to Khashoggi. Twitter has noticed.

If Trump chooses the BS that Prince MBS is selling over the CIA’s conclusion, we’ll have every reason to believe it… https://t.co/ibN5m5nLj1
— Laurence Tribe (@Laurence Tribe) 1542411205.0

It’s bad enough that Donald Trump has no respect for democratic principles and is only concerned with greed and sel… https://t.co/vHJ9J9QApO
— Jared Yates Sexton (@Jared Yates Sexton) 1542810708.0

@Jhenya_Belitsky I don't understand why we still see people writing as though Trump behavior (from any of them incl… https://t.co/SJiFYyeQAM
— E.Hatt-Swank (@E.Hatt-Swank) 1542810038.0

The Wall Street Journal and several Republican senators have spoken out against Trump's statement, but if the figurehead of the United States doesn't represent his country's values, speaking out for them alone can only change so much.