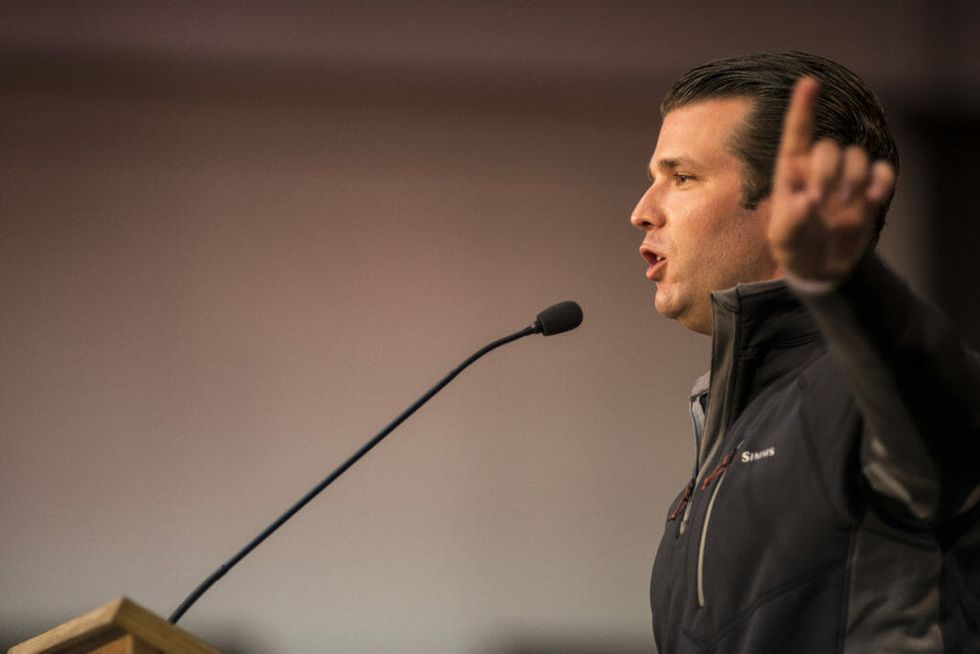 BOZEMAN, MT - APRIL 22: Donald Trump Jr. speaks at a rally for Republican Greg Gianforte as he campaigns for the Montana House of Representatives seat vacated by the appointment of Ryan Zinke to head the Department of Interior on April 22, 2017 in Bozeman, Montana. Gianforte is running against democrat Rob Quist in the special election to be held on May 25, 2017. (Photo by William Campbell/Corbis via Getty Images)

Donald Trump Jr., the president's oldest son, released exchanges he had with the WikiLeaks Twitter account via direct messages during the 2016 presidential campaign after The Atlanticfirst reported on the correspondence, which was also turned over by Trump Jr.’s lawyers to congressional investigators.

The messages, The Atlantic points out, "are part of a long—and largely one-sided—correspondence between WikiLeaks and the president’s son that continued until at least July 2017" and suggest WikiLeaks, "a radical transparency organization that the American intelligence community believes was chosen by the Russian government to disseminate the information it had hacked, actively soliciting Trump Jr.’s cooperation."

Wikileaks "made a series of increasingly bold requests," according to the report, including asking for Trump’s tax returns, urging the Trump campaign on Election Day to reject the results of the election as rigged, and requesting that the president-elect tell Australia to appoint Julian Assange ambassador to the United States."

The organization reached out to Trump Jr. just before midnight on September 20, 2016, regarding a PAC-funded, anti-Trump website. “A PAC run anti-Trump site putintrump.org is about to launch,” WikiLeaks wrote. “The PAC is a recycled pro-Iraq war PAC. We have guessed the password. It is ‘putintrump.’ See ‘About’ for who is behind it. Any comments?”

Trump Jr. responded: “Off the record I don’t know who that is, but I’ll ask around. Thanks.”

After The Atlantic went public with the messages, Trump Jr. decided to post them to his personal Twitter account. "Here is the entire chain of messages with @wikileaks (with my whopping 3 responses) which one of the congressional committees has chosen to selectively leak," he wrote. "How ironic!"

"You're funny! What's truly ironic is that you're complaining about leaks. This was you 13 months ago," responded Twitter user Pé Resists‏, who posted a screenshot of a tweet Trump Jr. posted last year admonishing Wikileaks.

@DonaldJTrumpJr @wikileaks You're funny! What's truly ironic is that you're complaining about leaks. This was you… https://t.co/bebTcDO4Bt
— Pé Resists (@Pé Resists) 1510619205.0

@DonaldJTrumpJr @wikileaks Notice how the link in your tweet matches the one in your DMs with WL? It doesn't matter… https://t.co/FKzPosUNtq
— Pé Resists (@Pé Resists) 1510619576.0

Alan Futerfas, an attorney for Trump Jr., said in a statement provided to The Atlantic, "Putting aside the question as to why or by whom such documents, provided to Congress under promises of confidentiality, have been selectively leaked, we can say with confidence that we have no concerns about these documents and any questions raised about them have been easily answered in the appropriate forum."

In response to The Atlantic's report, Vice President Mike Pence maintained he was not aware of communications between WikiLeaks and Trump Jr.

“The Vice President was never aware of anyone associated with the campaign being in contact with Wikileaks,” said Pence’s press secretary, Alyssa Farah, in a statement. “He first learned of this news from a published report earlier tonight.”

Asked in October 2016 if the Trump campaign was “in cahoots” with WikiLeaks as it released damaging information on Hillary Clinton, Pence responded, “Nothing could be further from the truth."

Trump Jr. came under fire earlier this year after he revealed that he met with a Russian lawyer during the presidential campaign. An intermediary for the lawyer promised damaging information about Hillary Clinton, the Democratic opponent. Trump Jr.’s emails contradict months of denials by the Trump administration of any collusion with Russian operatives. Kushner describes attending the meeting, noting that he arrived late and that when he got there, the Russian lawyer was discussing a ban on U.S. adoptions of Russian children.