Donald Trump Jr. Is Getting Dragged for Saying He Is More Scared for His Sons Than His Daughters in the #MeToo Era 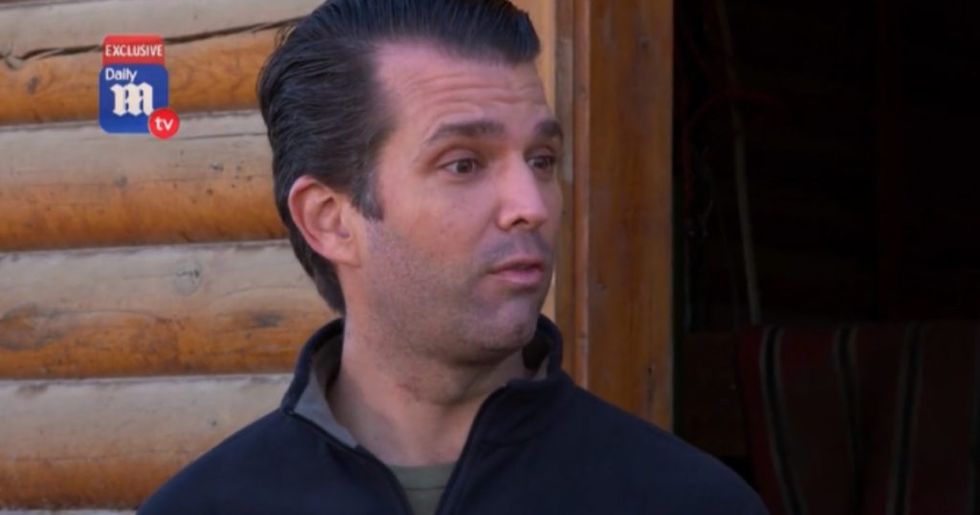 Amid the growing scandal involving sexual assault allegations against Supreme Court nominee Brett Kavanaugh, Donald Trump Jr. says he fears for his sons more than his daughters because of the potential for such claims to ruin their lives.

"I've got boys and I've got girls and when I see what's going on right now, it's scary for all things," Junior told DailyMailTV in an exclusive interview set to air Monday and Tuesday.

When asked who he was most scared for, Junior said: "Right now, I'd say my sons."

"The other problem is for the people who are the real victims of these things [sexual assaults] when it is so obvious like in cases like this," Junior said of Kavanaugh's first accuser, Dr. Christine Blasey Ford, "it really diminishes the real claims."

"I think it's important, in terms of doing an investigation, to get the facts out there and find out," Guilfoyle said. "It’s very tough thirty-five years later, but it doesn't mean it should be ignored."

Guilfoyle added: "People need to be careful to understand the politics involved as well, and what motivations people may have," implying that Ford's story is a political hit job.

@PeterAlexander Yeah but to be fair... Don Jr inherited some rotten DNA. He doesn’t have much under that slicked back modern hairstyle.
— Horase McCallany🇨🇦 (@Horase McCallany🇨🇦) 1538395315.0

@PeterAlexander Well huh...afraid they will grow up all assaulty like grandpa?
— Tactical Pants (@Tactical Pants) 1538395343.0

@dmartosko @DonaldJTrumpJr @kimguilfoyle @DailyMailTV Why would he worry about his sons? With the Trump money they'… https://t.co/8UqZUWwsJK
— Dana Adams (@Dana Adams) 1538396200.0

Others had some suggestions for Junior on how he could better prepare his sons - for instance, teaching them not to assault women.

Here are some helpful tips, just as a guide.

@PeterAlexander Parents have responsibilities to raise both sons and daughters to be respectful in ALL relationships
— Brad (@Brad) 1538404037.0

This tweet following Kavanaugh's Thursday testimony last week sums things up nicely (though the statistics are actually higher than 20 percent).

Powerful men would rather protect a world where there exists a 20% likelihood that their daughters will be sexually… https://t.co/v79CST3PMa
— Danielle J. Powell (@Danielle J. Powell) 1538082571.0

@PeterAlexander He just said he’s more worried about his sons being accused of rape or assault than about his daugh… https://t.co/cSRbxUrs0k
— Andrea P (@Andrea P) 1538403143.0

Though Junior may have more to fear.