This 2016 Video of Don Jr. Talking About Russian Meddling Right After His Infamous Meeting is Coming Back to Haunt Him 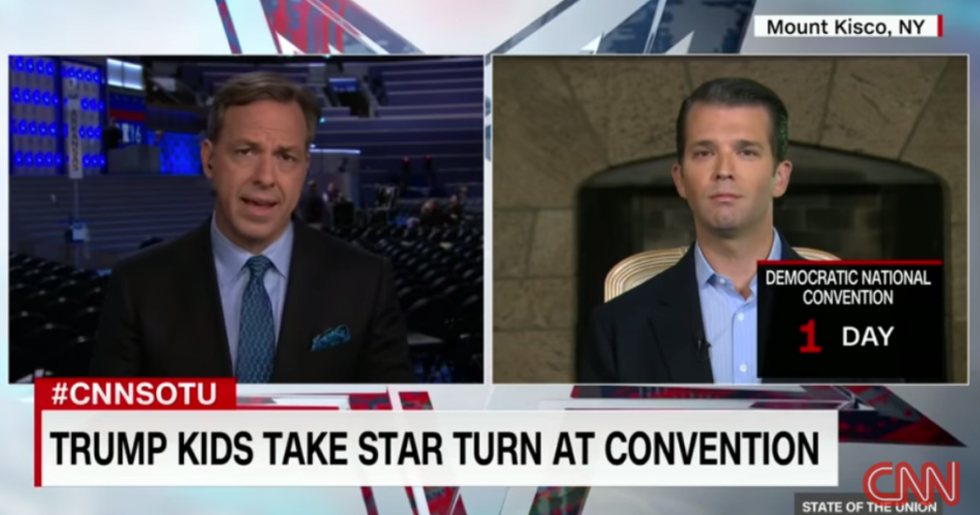 No, this is not from The Onion.

Specifically, Junior was upset that Clinton's campaign manager, Robbie Mook, had previously told Tapper that Russia was meddling in the election.

"I can't think of bigger lies," Junior told CNN's Jake Tapper before pointing the finger at the Democrats.

"But that just goes to show you what the DNC and what the Clinton camp will do," Junior said. "They will lie and do anything to win."

Junior, unfazed by irony, suggested that "it's a rigged system, it's disgusting, and the people should be fed up" with what he characterized as a coordinated effort among the Democratic Party to "destroy" Bernie Sanders in the South during the primary.

"There's nothing wrong with a fair fight, Jake," Junior continued. "I don't mind a fair fight. But these lies, and the perpetuating of that kind of nonsense, to try to gain some political capital, is just outrageous."

Junior was trying to solicit assistance from the Russians to get his father elected, failed to do so, and then went on national television to accuse his opponents of foul play.

The hypocrisy is breathtaking.

What is wrong with these people?

@Susan_Hennessey I cannot listen to Jr. speak for 7 minutes. This guy is the worst, and I'm hopeful justice will serve him his comeuppance.
— Frederick C. Trump (@Frederick C. Trump) 1557432144.0

@Susan_Hennessey This interview was right after one with Robby Mook who stated Russia was interfering and was met w… https://t.co/TEoSuTeGzv
— Frances (@Frances) 1557429576.0