Paul Ryan Just Warned How Donald Trump Could Lose the 2020 Election, and Don Jr. Is Not Having It...At All 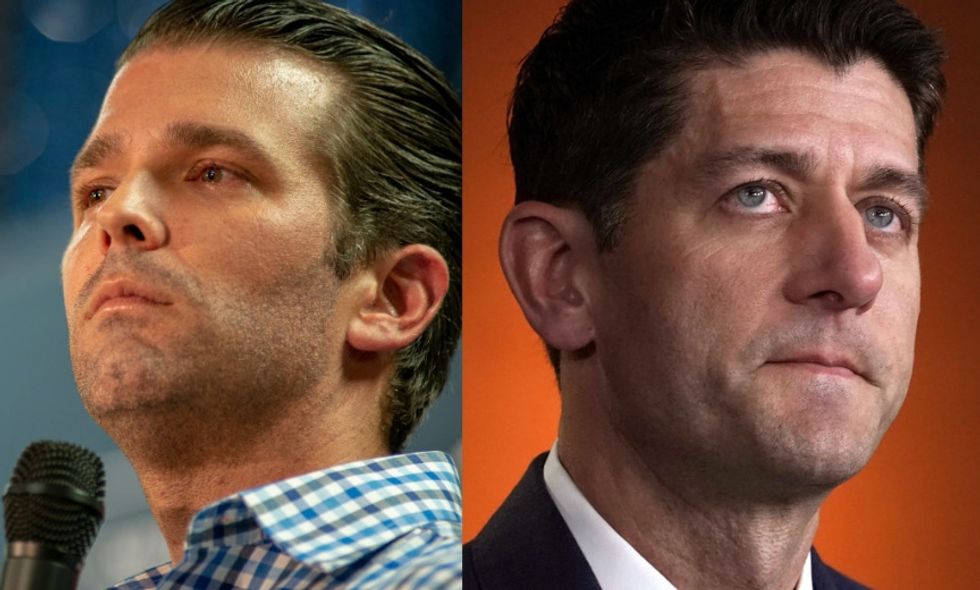 Former Republican Speaker of the House Paul Ryan has kept a relatively low profile since retiring from Congress last year, but he recently spoke out at a lecture in Flordia regarding President Donald Trump and his prospects for reelection in 2020.

“The person who defines that race is going to win the race. If this is about Donald Trump and his personality, he isn’t going to win it.”

It's no secret that Donald Trump is obsessed with winning, as is one of his most valiant defenders and eldest son: Donald Trump Jr.

Trump Jr. responded to Ryan's words, and he didn't hold back.

Trump Jr. and Paul Ryan represent two different sides of the same GOP coin. During his tenure as speaker, Ryan appealed to Republican ideologies that formed before the Tea Party, often stretching to defend Trump while simultaneously condemning his reckless behavior.

Meanwhile, Trump Jr. appeals heavily to Tea Party Republicans and the alt-Right, frequently amplifying rhetoric that is unpresidential even by his father's standards. It was this base that turned against Paul Ryan, dismissing him as ineffective at best and harmful to the Republican party's hold over the government at worst.

Many of Ryan's critics sided with Trump Jr.

But Trump Jr. wasn't short of critics either.

Many pointed out the shortcomings of his father and family.

@DonaldJTrumpJr Fairly sure you’re in no position to brag about winning, when your family’s deeply embroiled in cor… https://t.co/Ce8KbqCBcl
— Mike P Williams 🌹 (@Mike P Williams 🌹) 1552406731.0

@DonaldJTrumpJr LOL, your daddy lost The House. He handled it like he did his marriage to your mom, making casinos… https://t.co/VvPXiSaFTT
— Cliff Schecter (@Cliff Schecter) 1552407118.0

We'll see who was right when the 2020 election finally comes to fruition.