Donald Trump Jr. Is Getting Dragged for His Over the Top Fourth of July Instagram Post of His Father

Somebody actually made this. 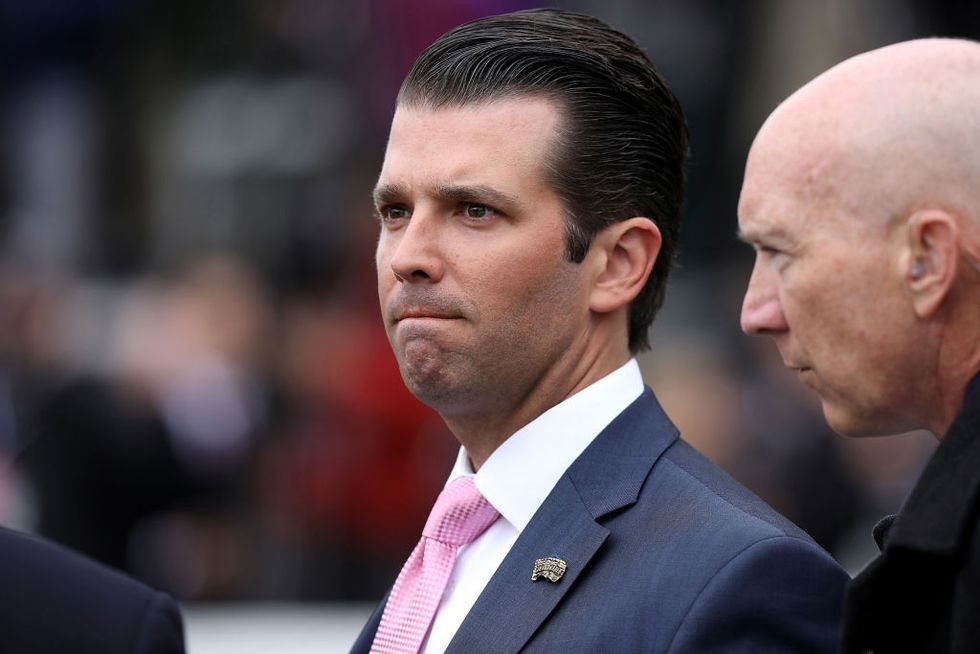 WASHINGTON, DC - APRIL 02: (AFP OUT) Donald Trump Jr. attends the 140th annual Easter Egg Roll on the South Lawn of the White House April 2, 2018 in Washington, DC. The White House said they are expecting 30,000 children and adults to participate in the annual tradition of rolling colored eggs down the White House lawn that was started by President Rutherford B. Hayes in 1878. (Photo by Chip Somodevilla/Getty Images)

The comments he received on the meme were likely not what he expected.

Many pointed out that the post was disrespectful to military veterans because President Trump never served in the military.

The elder Trump received five military draft deferments during the Vietnam War, including one medical deferment after he was diagnosed with bone spurs––protrusions caused by calcium built up on the heel bone––in his foot while a student at the private New York Military Academy. “I had a doctor that gave me a letter — a very strong letter on the heels,” he said during an interview with The New York Times in 2016 explaining his deferments, adding that the heel spurs were “not a big problem, but it was enough of a problem.”

This fact did not escape many of the commenters.

On Twitter, Trump Jr. posted a similar image of his father standing atop a military tank and flanked by the American flag.

The responses were similar, with several people posting political cartoons which excoriate the president for much of his domestic and foreign policy agenda. One cartoon depicts the president straddled by Russian leader Vladimir Putin, in a nod to Special Counsel Robert Mueller's investigation into Russian meddling in the 2016 presidential election.

The president, meanwhile, posted his own images to Instagram marking the Fourth of July, including one of him embracing the American flag.

Last year, Senator John McCain (R-AZ) in an interview about the Vietnam War, appeared to mock President Trump’s draft deferments, pointing to wealthy Americans who were able to get out of being drafted into service. McCain, who during the conflict spent several years as a prisoner of war, notoriously sparred with Trump in 2016 after Trump, then a presidential candidate, doubted his status as a war hero.

In 2016, Trump infamously sparred with Ghazala and Khir Khan, the parents of the parents of a Muslim American Army captain slain in Iraq in 2004, following their appearance at the Democratic National Convention in Philadelphia.

In his address, Khizr Khan delivered perhaps the most damning indictment of Donald Trump’s immigration proposals. “Our son Humayun had dreams … of being a military lawyer, but he put those dreams aside the day he sacrificed his life to save the lives of his fellow soldiers,” Khan said. “Hillary Clinton was right when she called my son ‘the best of America.’ If it was up to Donald Trump, he never would have been in America.”

The crowd began to cheer the moment Khan pulled out a pocket-sized copy of the American Constitution.

“Donald Trump, you are asking Americans to trust you with their future. Let me ask you: Have you even read the United States Constitution? I will gladly lend you my copy,” he said. “In this document, look for the words ‘liberty’ and ‘equal protection of law.’ Have you ever been to Arlington Cemetery? Go look at the graves of brave patriots who died defending [the] United States of America. You’ll see, all faiths, genders, and ethnicities. You have sacrificed nothing and no one.”

Khan received a standing ovation, but Trump soon made headlines for criticizing Ghazala Khan’s silence and implying that she wasn’t allowed to speak. “I’d like to hear his wife say something,” he said at the time.

“When Donald Trump is talking about Islam, he is ignorant,” wrote Ghazala Khan in a scathing Washington Post op-ed published soon afterward. “If he studied the real Islam and Koran, all the ideas he gets from terrorists would change, because terrorism is a different religion. Donald Trump said he has made a lot of sacrifices. He doesn’t know what the word sacrifice means.”