Twitter Can't Stop Mocking Donald Trump Jr. for His Questionable Tweet Going After the Ethics of a Democratic Senator 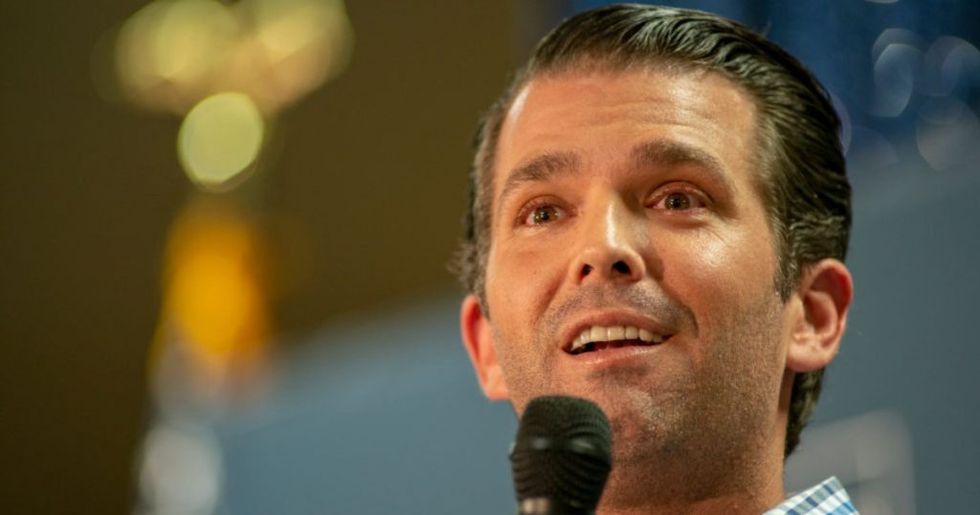 Donald Trump Jr. inserted himself into New Jersey's Senate race on Monday, tweeting that a vote against incumbent Senator Bob Menendez (D-NJ) "seems like a no-brainer."

"NJ has a clear choice," the president's eldest son said on Twitter. "Stick with Menendez who will always be dogged by serious ethics questions, or back GOP challenger, Bob Hugin, a Marine Corps veteran and the former chief of a large and very successful business. Seems like a no-brainer."

NJ has a clear choice. Stick with Menendez who will always be dogged by serious ethics questions, or back GOP chall… https://t.co/sqWNPVy0n3
— Donald Trump Jr. (@Donald Trump Jr.) 1540218979.0

While it's true that Menendez has been plagued by ethics complaints, Twitter didn't waste a second calling out Junior on the obvious: if he's so worried about corruption, he should look at his father and the never-ending swamp circus that is his presidency.

@DonaldJTrumpJr I can’t believe u said ethics when ur family had 10 000 children in detention center it’s just unethical comment in itself
— alex brucker (@alex brucker) 1540220367.0

@DonaldJTrumpJr Oh please do opine about “ethics questions.” It occurs to me how profoundly un-selfactualized you are.
— Mike Maples (@Mike Maples) 1540219689.0

@DonaldJTrumpJr It does seem like it should be a no-brainer. Too bad the GOP is so morally and ethically bankrupt t… https://t.co/3MvQxxE9dE
— Jenny Gattone (@Jenny Gattone) 1540223001.0

Others pointed out that Junior's endorsement of Hugin, a former Marine and pharmaceutical executive at Celgene, represents a tone-deafness to the rising costs of prescription drugs and healthcare that are burdening ordinary Americans.

Hugin, meanwhile, is releasing airing attack ads accusing Menendez of hiring underage prostitutes during a trip he took to the Dominican Republic.

The rumors first surfaced in 2012 and numerous news outlets, including The Washington Post, investigated the matter and found nothing corroborating.

Hugin is running the spots anyway.

“The Washington Post was wrong,” Hugin’s campaign says on a website. “In 2015, the Obama Justice Department said it had specific, corroborated allegations of Menendez engaging [in] sex acts with minors and that they ‘were not so easily disprovable.’ In fact, the FBI detailed additional allegations that showed Melgen’s ties to women; even his own pilot described ‘young girls’ who ‘looked like escorts.’ The FBI was able to verify young women with financial ties to Melgen as being in Casa de Campo at the same time as Menendez.”

Menendez cruised to reelection in 2012 with nearly a 20-point margin over his opponent, and even though he wasn't convicted, the trail of scandals are now weighing heavily on him.

Menendez was "admonished" by the Senate Ethics Committee in May for accepting gifts from a Florida ophthalmologist named Salomon Melgen in exchange for boosting his business. His federal corruption trial last year ended in a mistrial and the Department of Justice dropped the charges.

Despite his ethics issues and underwater approval, however, a Monmouth University poll found that "corruption in government" is the second-most important issue for New Jersey voters. The first? Healthcare.

Nevertheless, Menendez has maintained a sizeable lead in the polls in deep-blue New Jersey, which has not sent a Republican to the U.S. Senate since 1972.

For his part, Hugin could appeal to disenchanted Democrats who are wary of leaving Mendendez in office. He supports LGBT equality and is pro-choice, but his ties to President Donald Trump may not be something New Jersey voters are willing to look past.

Hugin chaired Trump's 2016 election effort in the Garden State and served as a delegate at the Republican National Convention. In his Senate race, Hugin has tried to distance himself from the president.

"This race is Bob Hugin versus Bob Menendez," he told NBC News in a recent interview. "This is a New Jersey race."

And although Hugin has said he would "stand up to anyone," including Trump, his previous ties to the president could simply prove too toxic.

"At first, the trial and all that came out of it was a factor for me," 72-year-old Newark resident Barbara Tillman, who supports Menendez for a third term, said to NBC News. "No one is perfect. I'd still rather have him than someone who will support the Trump agenda.”