We all knew what he meant. 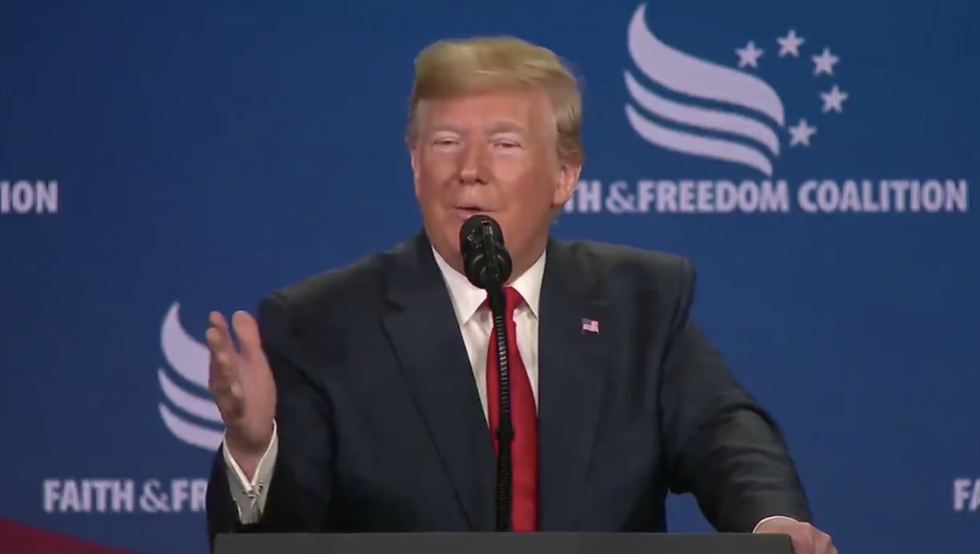 President Donald Trump's ire for the late Senator John McCain (R-AZ) has been well-documented. On the campaign trail, Trump questioned why the former prisoner of war was described as a war hero and McCain railed against Trump for siding with Russian president Vladimir Putin at a press conference in Helsinki.

Trump's bitterness against McCain reached new debts, however, when McCain famously voted no on Trump's overhaul of the Affordable Care Act. The legislation failed, humiliating Trump.

In fact, that's what many believe the President did on Wednesday in a speech to the Faith & Freedom Coalition.

Trump appeared not only to rejoice in McCain's death—but to claim he was in hell:

"We needed 60 votes. And we had 51 votes. And sometimes, you know, we had a little hard time with a couple of them, right? Fortunately, they're gone now. They've gone on to greener pastures. Or perhaps far less green pastures... They're gone. I'm very happy they're gone."

White House Deputy Press Secretary Hogan Gidley assured that Trump was actually talking about former Senators Bob Corker (R-TN) and Jeff Flake (R-AZ) who have since left the senate for other endeavors, but were often reluctant to vote with the more radical policies championed by Trump.

However, McCain was the only Republican to vote against healthcare overhaul who isn't still in the senate. With Trump's bitterness toward McCain so pronounced, people aren't buying that Trump was talking about Corker or Flake.

And people were disgusted.

@jdawsey1 Trump is such a disgusting and loathsome monster. This truly pathetic and poorly veiled shot at McCain is… https://t.co/jtArpnnero
— Barbara Walsh (@Barbara Walsh) 1561580746.0

Trump didn't lower flags to half mast when McCain died last August until after days of national outcry. As recently as this month, the Navy was asked to remove the USS John McCain from Trump's sight while he was on a visit to Japan.