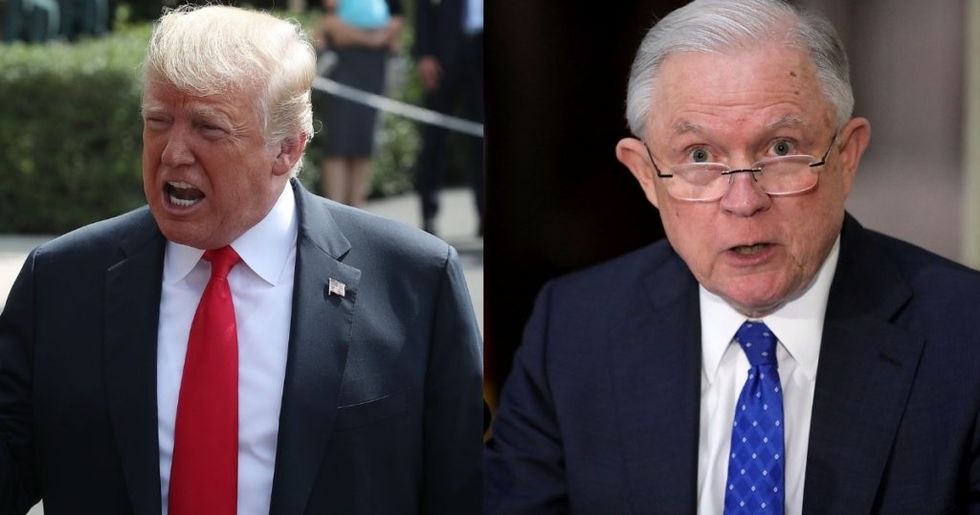 President Donald Trump on Monday fired off an attack on Attorney General Jeff Sessions in a tweet, complaining about recent criminal indictments of Republican members of Congress ahead of the November midterm elections.

Trump lamented that the charges filed against Collins and Hunter, both of whom were early supporters of Trump's presidential campaign, could hurt the G.O.P.'s chances of maintaining control of Congress. Collins and Hunter both come from deep-red districts which under normal circumstances should be "easy wins" by Republicans.

Several prominent Republicans blasted Trump for suggesting that the rule of law should be subject to political expediency.

Congressman Justin Amash (R-CO) tweeted that politics should never be placed "above the rule of law."

Ben Sasse of Nebraska told Trump in a statement that the United States is not a "banana republic with a two-tiered system of justice — one for the majority party and one for the minority party."

"These two men have been charged with crimes because of evidence, not because of who the president was when the investigations began," Sasse continued, acknowledging that investigations into Collins and Hunter began under President Barack Obama. "Instead of commenting on ongoing investigations and prosecutions, the job of the president of the United States is to defend the Constitution and protect the impartial administration of justice."

Arizona's retiring Senator Jeff Flake (R) said Trump should be "committed to defending and upholding the constitution," not using the Justice Department to "settle political scores."

This is not the conduct of a President committed to defending and upholding the constitution, but rather a Presiden… https://t.co/LzFBONpizH
— Jeff Flake (@Jeff Flake) 1536016029.0

The president tweeted again roughly 15 minutes later, this time whining about the response to his firing of FBI Director James Comey last year.

Comey's dismissal led to Sessions appointing Special Counsel Robert Mueller, who has been continuing Comey's investigation into the Trump campaign's ties to Russia and whether Trump obstructed justice in firing Comey. Mueller has reportedly been rummaging through Trump's tweets to find evidence of criminal intent.

On Tuesday, Fox News host Judge Andrew Napolitano warned that Trump's Labor Day tweets could be used by Mueller to "prove corrupt intent in an obstruction of justice charge."

Uh oh - prepare for Trump freak out: Napolitano said that such tweets could be used by Mueller to potentially prov… https://t.co/LIYJpEX1Eu
— Nicolle Wallace (@Nicolle Wallace) 1536063582.0

Napolitano said there is "evidence of a serious crime here," adding:

"When the president says these things — basically, ‘I want to you use Justice Department to help the Republican Party’ — that is fodder for the cannon of Bob Mueller," the judge said.

Twitter users also tore into Trump and his supporters for their disregard for the American systems of justice.

"You voted for a public servant, not a king," one person wrote.

Others reminded the president that Collins and Hunter both clearly violated the law and that upholding the law is part of Trump's duty as president.

@realDonaldTrump REP Collins was caught breaking the law on the lawn of the white house as he attended one of your… https://t.co/f7poFadhng
— JOSEPH EICHER (@JOSEPH EICHER) 1536064882.0

@realDonaldTrump Don't you think it would be more appropriate to tell your supporters to stop committing crimes ins… https://t.co/DDA3nRHDFw
— Robert Crooks (@Robert Crooks) 1536063043.0

Trump's tweets are part of the public record according to the Presidential Records Act - which means anything Trump says on Twitter carries the same weight as any other statement he makes.

@realDonaldTrump Am sure you don't even realize that your tweets are part of the public record and that this one cl… https://t.co/MLqupZDT5z
— John Cooper (@John Cooper) 1536020699.0

@realDonaldTrump Thank you for helping Mr Mueller every day with your tweets which give him more proof to impeach a… https://t.co/fALvCFwPeo
— LDM (@LDM) 1536063632.0

What happened to the "law and order candidate?"

@realDonaldTrump He is referring to Duncan Hunter and Chris Collins were charged with campaign and financial crimes… https://t.co/KBIu0r0GOz
— Chet Pancakes (@Chet Pancakes) 1536067016.0

The Justice Department exists to uphold the law, not to protect Trump or do his bidding.

You are not the law, Mr. President.