Donald Trump Just Made a Questionable Claim About the Relationship Between James Comey and Robert Mueller, and Twitter Is Mocking Him Hard 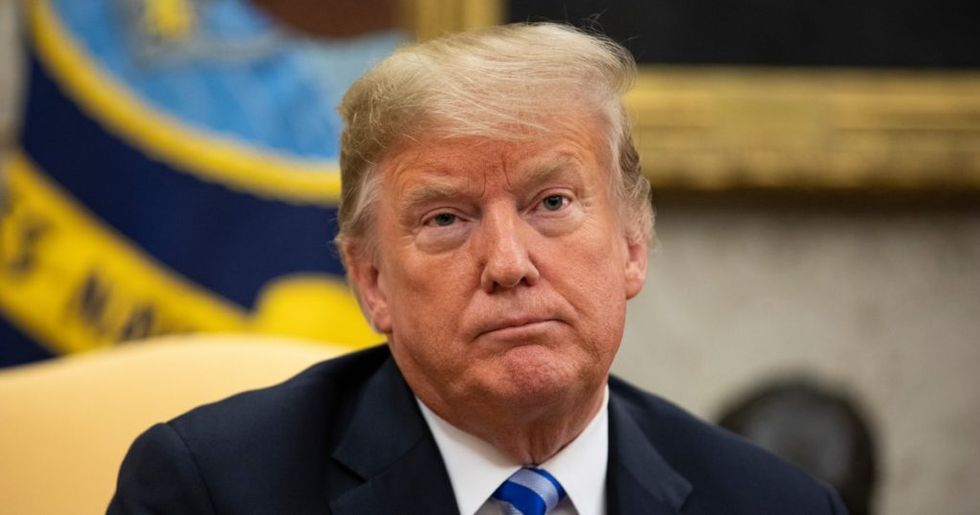 WASHINGTON, DC - SEPTEMBER 05: US President Donald Trump listens to a question as he meets with the Emir of Kuwait Jaber Al-Ahmad Al-Sabah in the Oval Office of the White House on September 5, 2018 in Washington, DC. (Photo by Alex Edelman- Pool/Getty Images)

In his second interview with the Daily Caller in as many days, President Donald Trump on Wednesday boasted that he possessed intimate pictures of former FBI Director James Comey and Special Counsel Robert Mueller, whom the president often claims are "best friends."

Trump was asked if he had interviewed Mueller as a potential FBI director, a position Mueller had previously held under Presidents George W. Bush and Barack Obama.

"I liked him," Trump recalled of Mueller, "but I didn’t give him the job."

When pressed on why not, Trump said he had a "business dispute" with Mueller and that "he’s Comey’s best friend."

Trump then made a stunning claim - that he has pictures of Comey and Mueller "hugging and kissing."

I could give you 100 pictures of him and Comey hugging and kissing each other. You know, he’s Comey’s best friend.

This occurred moments after Trump had reiterated his belief that Mueller's investigation into Trump-Russia collusion and obstruction of justice is "illegal."

I consider it to be an illegal investigation. It should’ve never been allowed to have happened.

The president also referred to Mueller and his team of prosecutors as "17 angry Democrats," however the typical line of attack is "13 angry Democrats" (Mueller is a life-long Republican).

No one believes Trump has pictures of Comey and Mueller kissing, but here is one of Trump kissing Comey.

@RawStory @DemodogsandCats Here's one of some guy giving Comey a peck on the cheek and holding his hand. https://t.co/KRY6aMEctb
— Ellen Garrison (@Ellen Garrison) 1536168662.0

Social media remembers a video of Trump and his now TV lawyer Rudy Giuliani embracing - while Giuliani is dressed in drag.

Regardless, Twitter immediately fired back at Trump. Put up or shut up, Mr. President.

How... why? We have questions.

@thehill That’s far more than you could show of @MELANIATRUMP hugging and kissing @realDonaldTrump
— Richard (@Richard) 1536178183.0

Others alluded to other ridiculous claims Trump has made.

Like when he said Muslims were cheering in the streets after 9-11.

@DeanObeidallah @Mediaite Are those with the pictures of Muslims celebrating in NJ on Sept. 11th?
— Anne McCarthy (@Anne McCarthy) 1536177359.0

And the newly released book by Bob Woodward in which administration officials trash the president and his unfitness for office.

And pictures of Trump hugging the Clintons.

@jdawsey1 @WarlickLeslie He may be a bit confused as to the subjects in the pictures. https://t.co/NQwslQx8KJ
— Ellen Garrison (@Ellen Garrison) 1536166801.0

Seriously, this happened, and it's only Wednesday.