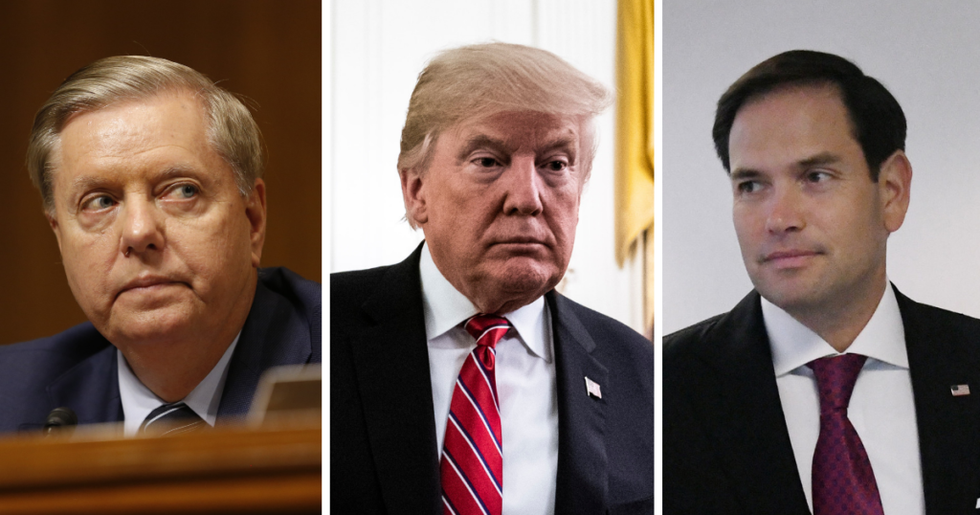 President Donald Trump stunned the political world Wednesday when he announced the withdrawal of American troops from war-torn Syria on Twitter and declaring victory over ISIS.

"We have defeated ISIS in Syria," Trump tweeted. "My only reason for being there during the Trump Presidency."

“Five years ago, ISIS was a very powerful and dangerous force in the Middle East, and now the United States has defeated the territorial caliphate," Sanders said in a statement. "These victories over ISIS in Syria do not signal the end of the Global Coalition or its campaign. We have started returning United States troops home as we transition to the next phase of this campaign."

Trump's decision ignited a firestorm across the political fold.

Senator Lindsey Graham (R-SC) blasted the president's announcement, saying in a statement that Trump is making an "Obama-like mistake," adding that "while American patience in confronting radical Islam may wane, the radical Islamists’ passion to kill Americans and our allies never wavers."

Graham continued: “After visiting Syria earlier this year, it is abundantly clear the approximately 2,000 American troops stationed there are vital to our national security interests," he said, adding that pulling troops out of Syria "would be a big win" for Iran, Syrian President Bashar Al-Assad, and Russian President Vladimir Putin, with whom Assad is allied.

"I fear it will lead to devastating consequences for our nation, the region, and throughout the world," Graham warned. "Staying there is an insurance policy against the reemergence of ISIS and destruction of our Kurdish allies who fought so bravely against them."

Senator Marco Rubio (R-FL) joined Graham in condemning Trump's troop withdrawal, tweeting that a "'full and rapid' withdrawal from #Syria is a grave error with broader implications beyond just the fight against ISIS."

“full and rapid” withdrawal from #Syria is a grave error with broader implications beyond just the fight against… https://t.co/kZg9NthfRu
— Marco Rubio (@Marco Rubio) 1545233063.0

“The President's generals have no idea where this weak decision came from: They believe the high-fiving winners tod… https://t.co/zyRsfoJOhx
— Ben Sasse (@Ben Sasse) 1545251316.0

Congressman Adam Kitzinger (D-ILL) also mirrored Graham's concerns. He tweeted that it is "not true" ISIS has been defeated and issued a reminder about what happened when the United States tried to pull out of Iraq.

"Really? Iran is rejoicing right now," Kitzinger wrote. "We left Iraq, and had to come back. I would sure hope the President and his advisers are smarter than this."

Kitzinger told Josh Rogin of WaPo "that the timing of the move could not be more counterproductive."

“History will look at that as one of the stupidest strategic moves before a negotiation,” he said. “In order to have a successful diplomatic outcome, you have to have a military option and a military presence.”

“ISIS has NOT been defeated,” says @SoccerMouaz of the Syrian Emergency Task Force. “I have no idea what the president is talking about.”

“ISIS has NOT been defeated,” says @SoccerMouaz of the Syrian Emergency Task Force. “I have no idea what the president is talking about.”
— Jake Tapper (@Jake Tapper) 1545231619.0

@jaketapper @ReaganBattalion @SoccerMouaz “I have no idea what the president is talking about.” Pretty much sums up the past 2 years.
— Dahling (@Dahling) 1545236886.0

The Jewish News Agency panned the troop withdrawal too, voicing fears over the safety of Jews in the region should Iran be able to exert greater power. The JNA warns of "regional war" resulting from Trump "diverting headlines" from the mountain of investigations grinding against his presidency.

Some Democrats, however, are applauding Trump's decision.

"Both the Trump and Obama Administrations in Syria went far beyond the congressionally authorized use of force to go after terrorists," wrote California Congressman Ted Lieu. "Congress never authorized the Executive Branch to go to war in #Syria. I am pleased @realDonaldTrump is bringing our troops home."

I applaud the decision by @realDonaldTrump to withdraw US troops from Syria. Neither the Obama Administration nor… https://t.co/Qtm9cMlBFl
— Ted Lieu (@Ted Lieu) 1545239219.0

Both the Trump and Obama Administrations in Syria went far beyond the congressionally authorized use of force to go… https://t.co/YbXJkm1ohE
— Ted Lieu (@Ted Lieu) 1545242443.0

But without a long-term, coherent strategy, Lieu may be prematurely celebrating, especially given the vulnerability of the Kurds, whom U.S. forces support.

"The Coalition has liberated the ISIS-held territory, but the campaign against ISIS is not over," said Defense Department spokesperson Dana W. White. "We have started the process of returning U.S. troops home from Syria as we transition to the next phase of the campaign."

The U.S. will "continue working with our partners and allies to defeat ISIS wherever it operates," White said.

The Trump administration was warned as recently as Monday to not underestimate the capability of ISIS to regroup without an American military presence.

“The strategy is to use these various levers, the lever of all these military forces running around … the fact that much of the territory and many of the more valuable resources such as oil and gas are not in the hands of the regime,” James Jeffrey, the State Department’s special envoy for Syria, said. “We’re well on our way to seeing that happen, the problem is ISIS will come back if the underlying conditions are receptive to that kind of ideological movement."

Given all this, Trump took a beating on Twitter from people wondering what on Earth he is talking about. It was correctly noted that Trump - in office nearly two years - has yet to visit troops in a war zone.

@realDonaldTrump When were you there? Nearly two years in office and have yet to visit troops in a war zone.
— PGdubfan (@PGdubfan) 1545240665.0

Suspicion over who - or what - is dictating Trump's foreign policy is afoot.

@realDonaldTrump When you say “my only reason for being there” I immediately realize there’s some other reason😳
— Seth Peterson (@Seth Peterson) 1545240616.0

@realDonaldTrump Haven’t you said Iran is one of the greatest threats to the United States?? You do realize pullin… https://t.co/aCpP52eFqd
— Ryan Hill (@Ryan Hill) 1545242996.0

Trump is largely standing on his own, despite having promised during the campaign to "bomb the shit" out of ISIS. This promise, however, conflicts with another Trump guarantee... that he would end American participation in Middle East conflicts.

But Trump's decision Wednesday did not just fall out of the blue.

“We’ll be coming out of Syria, like, very soon,” Trump said in March. “I want to get out. I want to bring our troops back home.”

In April, he pledged a six-month window in which a plan would be developed to end American military involvement in Syria.

Earlier this month, Marine General Joe Dunford, the Chairman of the Joint Chiefs of Staff, said ISIS was far from defeated and that only 20 percent of U.S.-backed Syrian forces have been trained.

“With regard to stabilization," Dunford cautioned, "we have a long way to go."

Rising tensions with Turkey, which has threatened to attack American Kurdish partners in Syria, may offer a glimpse into Trump's thinking. Regardless, the president's decision is sure to please the axis of autocrats he so desperately seeks to emulate.