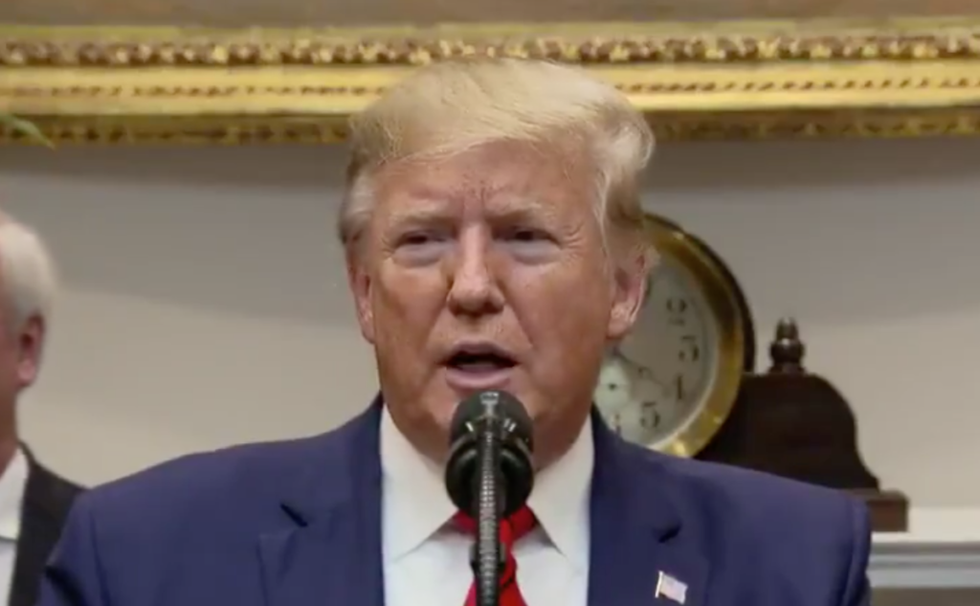 President Donald Trump faced bipartisan backlash upon announcing that the United States would be abandoning its Kurdish allies in Northern Syria after the Kurd's fought in place of Americans against ISIS. The United States had provided Syrian Kurds protection from a Turkish invasion and certain ethnic cleansing.

Days after Trump made the announcement, Turkey began an aggressive invasion into the region.

Along with the ethical ramifications of the United States abandoning its ally, Republican lawmakers expressed the likelihood that a Turkish invasion could open the door for a resurgence of ISIS and lead to the escapes of many ISIS fighters, nearly all of whom are in Kurdish custody.

At an appearance to sign Executive Orders on infrastructure, Trump dismissed concerns that ISIS fighters would escape, and—with his words—disregarded another ally in the process.

One reporter asked Trump about the possibility of ISIS fighters escaping to cause harm elsewhere, Trump said:

"Well, they're gonna be escaping to Europe. That's where they want to go, they want to go back to their homes, but Europe didn't want them from us. We could've given it to them, we could have had trials. They could've done whatever they wanted, but as usual, it's not reciprocal.  You know, my favorite word: 'Reciprocal.' That's all I want."

The apparent lack of concern for militant terrorists infiltrating Europe was a new low in an already astonishing display of Trump's isolationism.

And this is exactly what moral idiocy looks like, folks. If anyone can vote for another four years of this in good… https://t.co/1DbbLppKyo
— Tony NormanPG (@Tony NormanPG) 1570653919.0

People are uncertain whether or not Republicans will speak out against Trump's apathy toward an ISIS resurgence.

Is there a single GOP lawmaker, Trump surrogate or media ally who will take issue with the US president dismissing… https://t.co/X1CYb7dfhx
— Jim Sciutto (@Jim Sciutto) 1570652517.0

WHEN WILL REPUBLICANS STAND FOR OUR COUNTRY ??? ISIS IS REBORN THANKS TO TRUMP
— AmericanStar (@AmericanStar) 1570656035.0

No Republican has spoken out against Trump's comments about ISIS prisoners escaping to Europe.