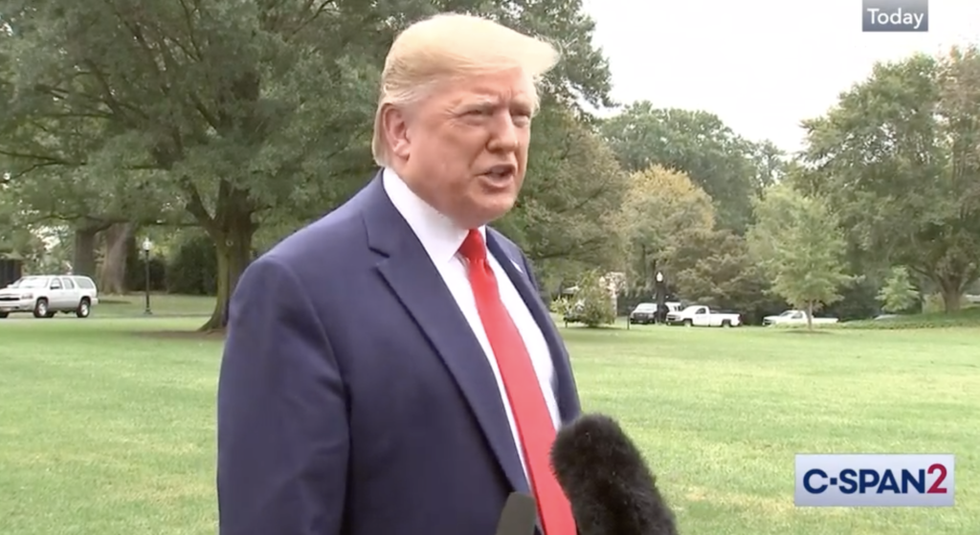 The President called for the investigation while talking to reporters on the White House lawn before departing to Florida to give remarks about a new Medicare proposal.

Pres. Trump urges China to investigate his political rival Joe Biden and his son—even as he faces an impeachment in… https://t.co/smtb5nrMiz
— ABC News (@ABC News) 1570120645.0

"Well I would think that if [Ukrainian leaders] were honest about it, they would start a major investigation into the Bidens," the President said. "It's a very simple answer."

He continued to dig deeper.

"[L]ikewise, China should start an investigation into the Bidens, because what happened in China is just about as bad as what happened with Ukraine."

Trump is repeating the baseless claim that Joe Biden interfered with an investigation into a Ukrainian energy company on which his son served as a board member.

1/ Trump just committed a felony violation of law by soliciting something of value in connection with a US election… https://t.co/lsJHjDiwXt
— Joyce Alene (@Joyce Alene) 1570115970.0

2/ The statute requires knowledge your conduct is a crime. After the Mueller investigation, there’s no way Trump wa… https://t.co/saDHRHfGFz
— Joyce Alene (@Joyce Alene) 1570116137.0

The key here is recalling impeachment doesn’t require a felony. Impeachment is meant, in the immortal words of… https://t.co/bmCAuqJrnU
— Joyce Alene (@Joyce Alene) 1570116437.0

Notably, just seconds before calling for China to investigate the Bidens, Trump said:

"I have a lot of options on China, but if they don't do what we want, we have tremendous power."

This comes just days before Chinese delegates arrive at the White House for trade talks, possibly assigning even morre significance to Trump's call for an investigation. The suggestion was reminiscent of Trump's implicit quid-pro-quo noted in the White House's rough transcript of his controversial phone call with Zelesnky, in which the two leaders discussed military aid to the country before Trump asked for the "favor" of investigating the Bidens.

Another day, another felony.

An impeachment inquiry is already underway. What remains to be seen is if Republicans will stand up to their leader.