After Donald Trump Condemned 'Acts or Threats of Political Violence,' People Are Sharing All the Times Trump Encouraged Violence, and It's a Lot 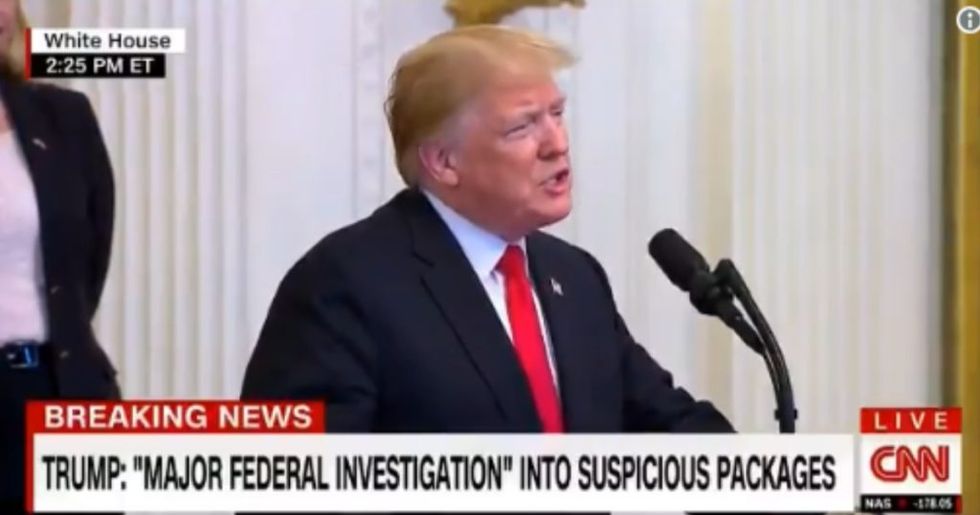 After a series of failed bombing attempts on President Donald Trump's political rivals stunned the nation on Wednesday, Trump condemned acts of political violence and urged the country to "unify."

"In these times, we have to unify," Trump said at a press conference. "We have to come together and send a very clear, strong, unmistakable message that acts or threats of political violence of any kind have no place in the United States of America.”

Trouble is, Trump has often encouraged using violence as a means to partisan ends.

And people shared them, reminding the President of how he truly feels about inciting violence against political enemies:

And there was this just last week:

Perhaps a cartoon is more the President's speed:

And who can forget this classic:

@pbondi Don’t forget Trump’s tweeting of a video in which he physically attacks a person who is supposed to be CNN. https://t.co/lAyd7OwMJ2
— Empire Storm (@Empire Storm) 1540411229.0

Trump just said, "Acts or threats of political violence of any kind have no place in the United States of America."… https://t.co/lIV23JIoBq
— Mikel Jollett (@Mikel Jollett) 1540409623.0

@keithboykin Total BS. The journalists killed at the @capitalgazette seem to be forgotten when attacks on media ar… https://t.co/SOgihSkYQu
— Lupe Woolf (@Lupe Woolf) 1540407929.0

The president's toxic rhetoric can be traced back to the 2016 race, and Twitter wasn't about to let him or anyone else forget it. The attacks included the attempted assassination of two former presidents and their families and a would-be bombing of CNN.

Trump is not directly accountable for what a crazy person might do, but his division & fearmongering has consequenc… https://t.co/8SEIquDgiA
— Matthew Miller (@Matthew Miller) 1540398214.0

After the perpetrator of the bomb threats against Democrats and the media was reveraled to be one of his supporters, Trump was asked whether he intends to "tone down" his rhetoric. His response was to suggest that he "tone it up" instead.

This was before political violence escalated even further on Saturday with the horrific killing of 11 at a synagogue in Pittsburgh.

Here's a disturbing timeline of Trump's violent rhetoric, lest we forget:

November 22, 2015, calling into Fox News: "Maybe he should have been roughed up because it was absolutely disgusting what he was doing."

February 1, 2016, Cedar Rapids, Iowa: "If you see somebody getting ready to throw a tomato, knock the crap out of them, would you? Seriously."

March 9, 2016, Fayetteville, North Carolina: "In the good old days this doesn't happen because they used to treat them very, very rough," Trump said of a protester, again. "And when they protested once, they would not do it again so easily. We've become weak, we've become weak."

March 11, 2016, Palm Beach, Florida: "And you know what? The audience swung back. And I thought it was very, very appropriate. The audience hit back and that's what we need a little bit more of."

March 11, 2016, St. Louis, Missouri: "Part of the reason it takes so long is nobody wants to hurt each other anymore, right?"

March 13, 2016, Meet the Press: Trump explains to Chuck Todd that he "instructed his people" to look into paying the legal fees of a North Carolina rally attendee who punched a black protester. His excuse? Middle fingers are too nasty for his fans.

"From what I understand he was sticking a certain finger up in the air," Trump charged. "That's a terrible thing to do in front of somebody that frankly wants to see America made great again."

Let's also not forget that Trump referred to neo-Nazis as "very fine people" after Heather Heyer was mowed down by a car in Charlottesville, Virginia last year.

UPDATE: This article has been updated since it was first published to reflect recent developments.