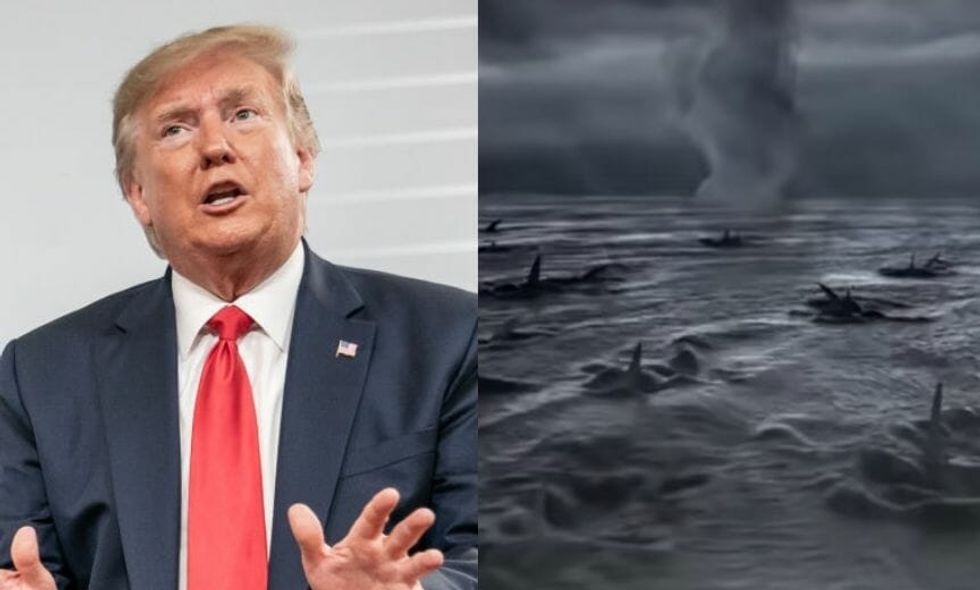 Axios recently reported that President Donald Trump floated the idea of dropping nuclear weapons into the eyes of U.S.-bound hurricanes in order to destabilize them before hitting land. Not only would this be insufficient energy to change a hurricane's path, but the wind could blow radiation towards coastlines, even further jeopardizing people and environments.

In a tweet, Trump insisted that reports of him wanting to nuke hurricanes was "more FAKE NEWS!"

People weren't buying Trump's defense. In fact, at least one person thinks she knows where he got the idea.

Sharknado was a 2013 television film about shark-infested tornados. The improbable success of the film elevated it to a famous, or rather infamous, franchise. Startlingly enough, Trump's idea to nuke the hurricanes sounds like a page straight out of the Sharknado playbook, as Natalie Martinez pointed out.

Martinez went on to point out direct parallels between events in Sharknado and suggestions from Trump.

Martinez even shared pictures that revealed Trump's hypothetical solution—disrupting the hurricane with warmth from an explosion—was some of the same logic used in Sharknado.

What's more, Martinez—who wrote her college thesis on Sharknado—shared that Trump was supposed to play the fictional president in the Sharknado III, but unfortunately chose to run for the real thing instead.

People laughed so they wouldn't cry.

@natijomartinez @JordanUhl Wait until you hear the solution to World Hunger he'll bring up after watching The Human Centipede.
— alexsavard (@alexsavard) 1566779012.0

To add to the discomfort brought by this news: Trump skipped a G7 summit on climate, biodiversity and oceans today. Perhaps he was watching Sharknado 6.