Donald Trump Keeps Telling the Same Really Specific Story About Human Trafficking Across the Border, But Experts Have No Idea What He's Talking About 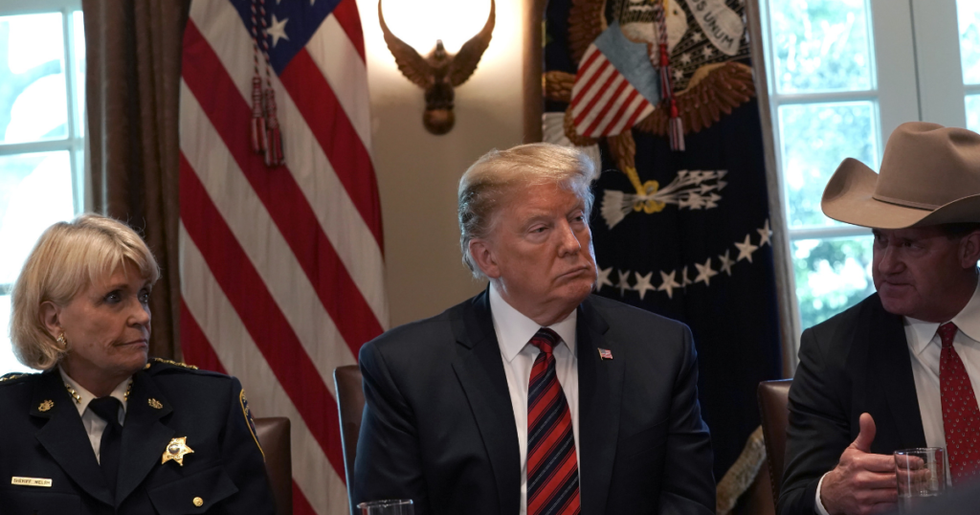 WASHINGTON, DC - JANUARY 11: U.S. President Donald Trump (C) hosts a round-table discussion on border security and safe communities with State, local, and community leaders in the Cabinet Room of the White House on January 11, 2019 in Washington, DC. As the second-longest government shut down continues, Democrats and Republicans have not found a compromise for border security funding and President Donald Trump's proposed wall on the U.S.-Mexico border. (Photo by Alex Wong/Getty Images)

Shortly after 2019 started, President Donald Trump began including claims about human trafficking in his pitch for a border wall with Mexico. Experts have no idea where the president is getting his information.

In at least eight instances, Trump has charged that women and children — bound with their mouths taped — are being smuggled over the border in cars and vans.

“They target young children — the Internet. And they come in through our southern border into our country. And they’ll have women taped — their mouths with duct tape, with electrical tape," Trump said at the American Farm Bureau Association. "They tape their face, their hair, their hands behind their back, their legs. They put them in the back seat of cars and vans, and they go — they don’t come in through your port of entry because you’d see them. You couldn’t do that.”

Though some details of the stories vary, such as the color of the tape used or the type of vehicles Trump envisions, experts and advocates for victims of human trafficking are saying the president's claims are baseless.

“I think his statements are completely divorced from reality,” Ashley Huebner, associate director of legal services at the National Immigrant Justice Center, told The Washington Post. “That’s not a fact pattern that we see.”

Huebner is one of a chorus of seasoned professionals "who have worked on the border or have knowledge of trafficking" that have "echoed Huebner’s characterization of the president’s tape anecdote."

"I have no idea the roots of it,” said Edna Yang, assistant executive director of Texas-based American Gateways. “I haven’t seen a case like that.”

“Could it happen? Sure, it could," Yang said, adding that Trump "does not have an understanding of what happens at the border. I think that all President Trump is doing is pushing a wall. A wall is not going to stop individuals fleeing to the United States when home conditions are terrible. He’s just trying different tactics to get what he wants.”

Yang was far from alone in her opinion.

“I’ve never had that,” said Anne Chandler, executive director of the Houston office of the Tahirih Justice Center, a veteran human trafficking expert.

“I’m not really sure where his information is coming from,” said Leah Chavla, a policy adviser with the Women’s Refugee Commission, who has visited the border more than a dozen times in since 2017.

In fact, "often, the migrants are willingly led on foot to illegally cross the border or legally enter with a visa at a port with the promise of a job when they arrive," WaPo noted.

“We have had individuals lured through recruiters and smugglers, not realizing that the job that waits for them is trafficking,” said Chandler. “On the journey, at the U.S.-Mexico border, they are completely unaware that they’re walking into a trafficking situation.”

The Twitterverse has its theories about where Trump's stories are coming from, and they are in no way shocking.

@washingtonpost @RiskyLiberal "Experts had no idea what he was talking about" is how he will be remembered.
— James Morrison (@James Morrison) 1547731287.0

@washingtonpost Usually when Trump starts telling weirdly specific stories out of nowhere, it turns out to be somet… https://t.co/2OZde9qxkq
— Verity Pace 🌐 (@Verity Pace 🌐) 1547732057.0

@washingtonpost it’s the same as Regans welfare queen - painting an image in people’s heads that then trumps the tr… https://t.co/iRuBIRFlkU
— Oceans of Hope (@Oceans of Hope) 1547733852.0

“Either he’s watching action films or he’s watching some other type of movie that involves handcuffs and tape over people’s mouths," said Lori Cohen, director of the Anti-Trafficking Initiative at Sanctuary for Families. "But in neither case is it based in any reality of what individuals helping trafficking victims see." Cohen added that in her 13 years at Sanctuary for Families, there was “only one client I know of who was driven across the border from Mexico.”

Martina Vandenberg, president of the Human Trafficking Legal Center, told the Star said Trump's "depiction of human trafficking is practically unrecognizable to those of us who have spent decades in the trenches combating these abuses."

Like Chandler from the Post story, Vandenberg said most human trafficking victims are lured into the United States, not smuggled. Only two percent of trafficking cases Vandenberg has handled have included kidnapping charges, she told the Star.

“It is far easier to lure victims with false promises of a better life in the United States,” said Vandenberg. “Why kidnap someone when you can convince them to travel willingly?”

Bridgette Carr, director of the Human Trafficking Clinic at the University of Michigan Law School, said she has "never had a case where someone’s mouth was taped up and they were brought across the border in the way the president described."

"Could it ever happen? Of course," Carr said. "But I’ve worked hundreds of human trafficking cases, and what the president describes, that’s just not what my life looks like in this work."

Trump's claims are simply not based on evidence, data or facts.

@ddale8 Trump is a snake oil salesman. He will say anything, to sell his version of reality. Is anyone really surpr… https://t.co/bJ50tOgXBU
— Erin MacStravic (@Erin MacStravic) 1547639836.0

So where is Trump getting all this?

"Trafficking experts have theorized," WaPo wrote, "that the president may have taken this description from a private conversation he had with a Border Patrol agent."

Neither the White House nor Customs and Border Protection has responded to requests for comment.