After Getting Rebuffed by Congress, We Now Know How Donald Trump Hopes to Fund His Border Wall 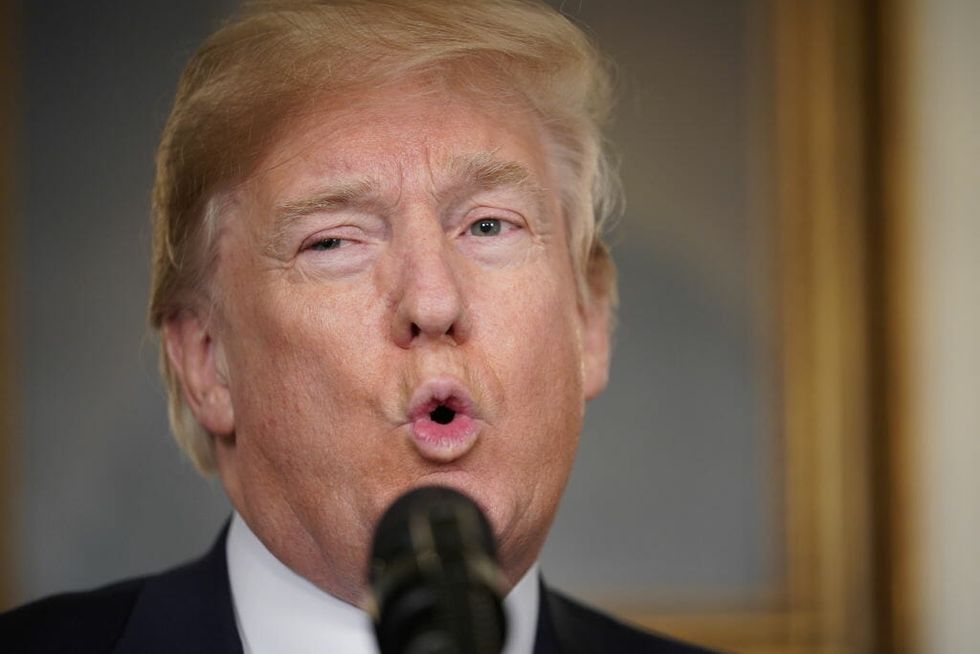 President Donald Trump feels "spurned" by the $1.3 trillion spending bill he signed last week which appropriated only $1.6 billion for his proposed border wall, far below the $25 billion he'd sought, and is privately pushing the U.S. military to fund construction for the project he made a cornerstone of his often incendiary campaign.

Three people familiar with the details of a meeting which took place in the White House last week told Washington Post reporters on condition of anonymity that Trump floated the idea to several advisers last week, even telling House Speaker Paul Ryan (R-WI) that the military should pay for the wall. Ryan gave a rather muted reaction, these sources said, and senior Capitol Hill officials said it was "unlikely" the president's suggestion would gain traction.

In another interaction with his senior aides, two White House sources said, the president noted that the spending bill appropriates so much money to the Department of Defense that the Pentagon––which received $700 billion––could surely afford the border wall.

The White House did not respond to requests for comment, and Sarah Huckabee Sanders, the White House Press Secretary, only offered that she "can't get into specifics."

Sarah Sanders did not dispute reports that Trump wants to take money from the military to pay for his stupid border… https://t.co/jRWHP54mUT
— Caroline Orr (@Caroline Orr) 1522176780.0

The president did, however, receive a rebuke from Senate Minority Leader Charles "Chuck" Schumer (D-NY), who called the president's latest proposal a "blatant misuse of military funds":

First Mexico was supposed to pay for it, then U.S. taxpayers, and now our men and women in uniform? This would be a blatant misuse of military funds and tied up in court for years. Secretary Mattis ought not bother and instead use the money to help our troops, rather than advance the president’s political fantasies.

White House and Defense Department officials say it's "unlikely" the military would fund the wall, and while the Pentagon does have enough money to fund the wall's construction, but reappropriating the money would require the president to beseech Congress for votes which he does not appear to have.

A senior Pentagon official confirmed that reappropriating funds from the current 2018 budget for the wall would require an act of Congress. The official added that if Trump wants to reappropriate the money for the 2019 defense budget in he would have to submit a budget amendment that would still require 60 votes in the Senate.

Several advisers said that Trump has grown frustrated while watching television news coverage of the spending bill, and is determined on finding a way to fund the wall, fearing that a failure to deliver on the promise would deal a heavy blow to his core base of supporters. The advisers added that Trump has only grown more passionate about the idea since visiting California earlier this month to view prototypes of the wall.

Trump privately is pushing Paul Ryan, White House officials and others to force the military to pay for the border… https://t.co/3iyApHCpkd
— Josh Dawsey (@Josh Dawsey) 1522170370.0

That Trump would occupy himself with trying to find a way to subvert a spending bill he last week called "historic" but disappointing, is unsurprising. He signed the bill into law last week––much to the chagrin of many conservative supporters––avoiding a government shutdown that loomed large over Washington once the president took to Twitter to vent his frustrations with the bipartisan legislation.

In signing the legislation, the president backed down from his earlier threat to veto the bill after failing to reach a deal with with Democrats to preserve Deferred Action for Childhood Arrivals (DACA), Obama-era legislation which protects “DREAMers”––undocumented immigrants who were brought to the U.S. by their parents as children––from deportation.

The president appears to be hedging his bets on having the military pay for the wall, two advisers told Washington Post reporters, noting that when Trump tweeted "Build WALL through M!" earlier this week, the "M" was intended to stand for "military."

Trump has tried––and failed––to deliver on his promise that Mexico would pay for the wall. In January 2017, shortly after Trump's inauguration, Mexican President Enrique Peña Nieto opted to cancel meetings with Trump after Trump ordered for construction on the wall to begin and suggested that some of the $25 billion in remittances migrants return home would be retained to pay for the barrier. Peña Nieto made the decision after an outraged Mexican public urged him to cancel, calling Trump a “bully.”