Donald Trump Just Added Two Fox News Personalities to His Administration, Because of Course He Did 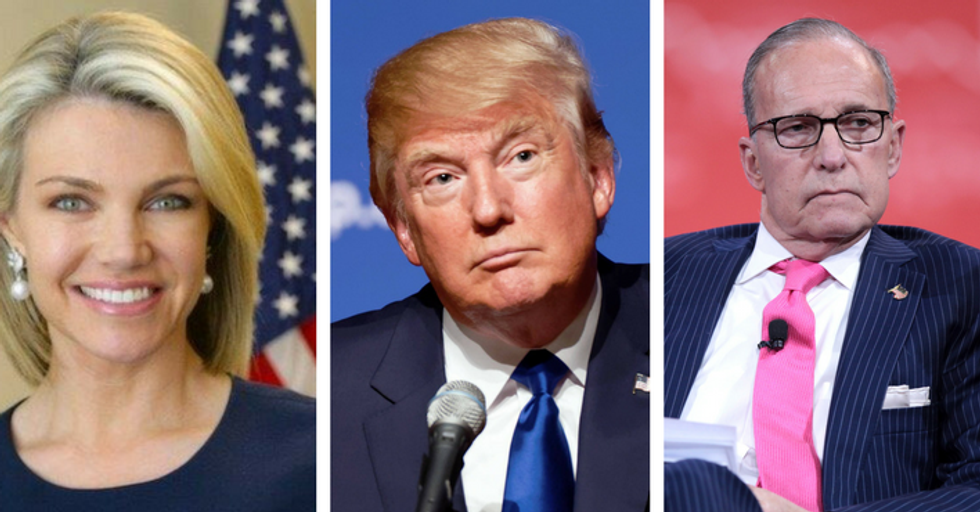 President Donald Trump will name conservative media analyst Lawrence "Larry" Kudlow and Heather Nauert, a former co-host of Fox & Friends and Fox & Friends First to key positions within his administration, according to sources familiar with the matter.

Kudlow, who served as Trump's informal economic adviser during the 2016 election campaign, will succeed Gary Cohn, who resigned last week following internal disagreements over the president's proposed tariffs on aluminum and steel, as the next head of the White House National Economic Council.

A source told CNN that Trump offered Kudlow the position during a phone conversation and Kudlow accepted. CNBC was the first to break the news about the president's offer.

Although Sarah Huckabee Sanders, the White House Press Secretary, said she had no personnel announcements to make, she confirmed that the president spoke to Kudlow earlier today.

Political commentators had already anticipated the move; Kudlow was long seen as the front-runner for the job.

Kudlow's appointment does not resolve the disagreement about the president's proposed tariffs, however. CNN notes that Kudlow has "been outspoken" in his opposition to the proposal. In an op-ed dated March 3, Kudlow outlined precisely why he disagrees:

President Trump genuinely believes that his steel and aluminum tariffs will save thousands of blue collar jobs. And we know from our interactions with him that he truly cares about these workers in Pennsylvania, Ohio and other rust belt states. The American people do as well, and we don't want factories to shut down. But even if tariffs save every one of the 140,000 or so steel jobs in America, it puts at risk 5 million manufacturing and related jobs in industries that use steel. These producers now have to compete in hyper-competitive international markets using steel that is 20 percent above the world price and aluminum that is 7 to 10 percent above the price paid by our foreign rivals. In other words, steel and aluminum may win in the short term, but steel and aluminum users and consumers will lose. In fact, tariff hikes are really tax hikes. Some of those 5 million jobs will be put in harm's way. And if they sell less to foreigners, the trade deficit goes up, not down.

Earlier this week, Trump acknowledged his disagreements with Kudlow, but expressed hope for a resolution on the matter, which has proven contentious, particularly in the Pennsylvania, where a special House election in the heart of the Rust Belt ended in victory for Conor Lamb, a moderate Democrat, in a district Trump won handily by 20 percentage points in the 2016 election.

"I'm looking at Larry Kudlow very strongly. I've known him a long time. We don't agree on everything but in this case I think that's good. I want to have a divergent opinion -- we agree on most," Trump said, adding that Kudlow has "come around to believing in tariffs as a negotiating point."

Even though Peter Navarro, the president's top trade adviser, supports Kudlow's selection (the two men have been friends since their time as economic analysts for CNBC), he publicly criticized Kudlow's views on trade in an interview with CNN earlier this month.

"Larry and Steve [Mnuchin] have never, ever supported the President on trade," Navarro told CNN's Jake Tapper, adding that while he considers Kudlow and Mnuchin (the Secretary of the Treasury) friends, they are "dead wrong on the economics" of trade.

Kudlow's past has also exposed him to further criticism. In 1987, he was rehired by Bear Stearns as its chief economist and senior managing director––and then fired in 1994 after abuse of cocaine caused him to skip an important client presentation. Kudlow later admitted to a $100,000 monthly cocaine addiction.

Kudlow's troubles continued, though, and he was later terminated from The National Review after about a year. He'd been notorious for week-long cocaine binges.

Kudlow later "found God" via Catholic Opus Dei retreats, discovering he liked the rigor of a group which employed methods some call "cult-like" and have likened to Scientology. He would eventually fashion himself as the "King of All Right-Wing Economic Media," according to Newsweek, and is now a CNBC contributor. He has repeatedly come under fire for his blunderous economic predictions, including when he referred to people who predicted the 2008 financial crisis as "bubbleheads" and didn't walk back his claims, instead assuring his listeners even after the meltdown that "there was nothing to worry about."

For her part, Heather Nauert gives the appearance that she will be far less contentious than the aforementioned Kudlow. A former Fox News host who joined the State Department as a spokeswoman in April 2017, she will now serve as the acting undersecretary for public diplomacy and public affairs. She will replace Steve Goldstein, whom the president terminated shortly after he publicly contradicted the White House on how Rex Tillerson, the former Secretary of State was notified about his firing.

Nauert will continue to serve as a spokeswoman for the State Department while she assumes Goldstein's former responsibilities. She will oversee three bureaus which include Education and Cultural Affairs, Public Affairs and International Information Programs. It's a significant change for the former broadcaster, who had previously worked as a correspondent on Fox and Friends, one of the president's favorite television programs. Nauert also previously served as a network correspondent for ABC News where she covered breaking news items.

But Nauert has no diplomatic experience, as many have pointed out.

Does Heather Nauert look familiar? She was the spokesperson for the United States Department of State and before th… https://t.co/3KFwNDvjsJ
— Red T Raccoon (@Red T Raccoon) 1520975857.0

As if to underline this point, Nauert made headlines after last month after she struggled to describe specific steps the State Department, under the direction of Tillerson, are taking to curb the violence in Syria. (The United Nations called for a 30-day ceasefire to "allow for evacuations and the delivery of humanitarian supplies," but was shut down by objections from Russia.)