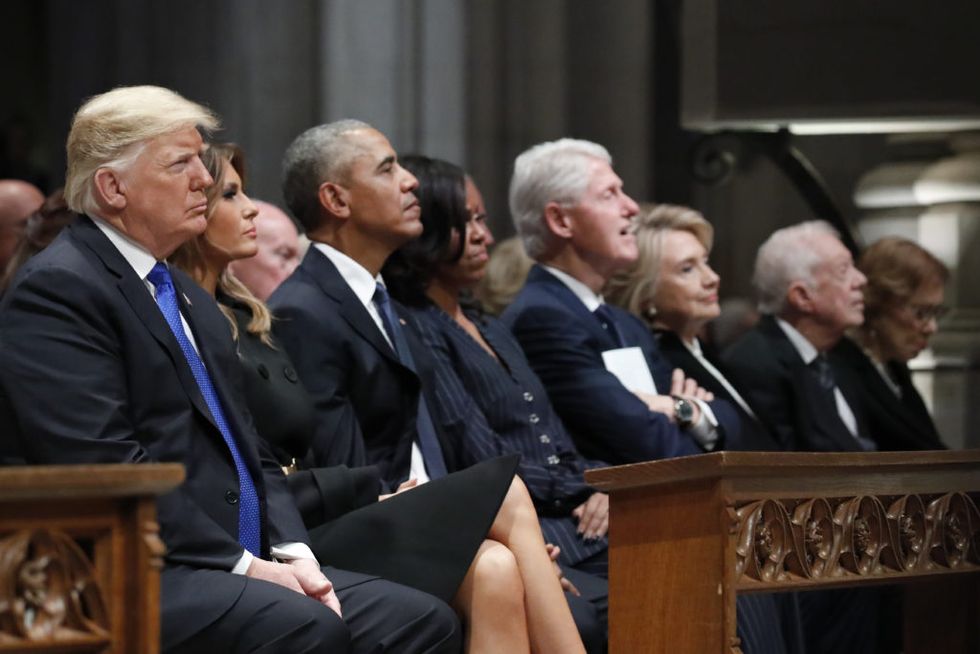 President Donald Trump on Wednesday attended the funeral of former President George H.W. Bush, who died Friday night at the age of 94. All living former presidents and first ladies were also present, but it was Trump's arrival that got the most attention, and how he seemed to turn the whole thing awkward.

Check out the mood before Trump arrived:

The Obamas and Clintons share a quick laugh inside the National Cathedral. Trumps have not been seated yet. https://t.co/oHgPe5FXW1
— Monica Alba (@Monica Alba) 1544024269.0

Taking his seat in the front row next to his wife, Trump greeted the Obamas as he entered the pews. It was the first time the two First Families have seen each other since Trump's inauguration.

The Clintons, situated in the middle of the bench, did not acknowledge Trump. Same goes for the Carters at the other end.

Hillary Clinton did not move a muscle. The shade was real.

I wish I could commit to anything as hard as Hillary Clinton commits herself to not making eye contact with Donald… https://t.co/sfl6GoI3fo
— Rob Flaherty (@Rob Flaherty) 1544026975.0

Trump's posture during the touching eulogies was very telling as well. Trump, sulking with his arms folded, is visibly uncomfortable listening to tributes to Bush -- a war hero and venerated statesman -- from family, friends, and foreign dignitaries.

And it did not go unnoticed.

Today was not about him, and that never sits well with Trump.

On Wednesday morning, Trump expressed his excitement for the funeral, which he called a "celebration," on Twitter.

"Looking forward to being with the Bush family," Trump tweeted. "This is not a funeral, this is a day of celebration for a great man who has led a long and distinguished life. He will be missed!"

Sure, there were no disruptions from Trump.

The bar is set so low to begin with, however, that the media praised him for his behavior at Bush's Tuesday memorial service.

Donald Trump is getting praised for his behavior at Bush’s funeral. Our president is such an asshole, we have to re… https://t.co/IeOkfXAyE7
— Chelsea Handler (@Chelsea Handler) 1543970416.0

Bush funeral prediction: If Trump doesn't heckle, spontaneously combust or wander out of the cathedral at the wrong… https://t.co/vGPcBCfOQY
— Edward Luce (@Edward Luce) 1544025568.0

One exception though: Trump was criticized for not reciting the Apostle's Creed during the Tuesday service. We will let the religious right grapple with that.