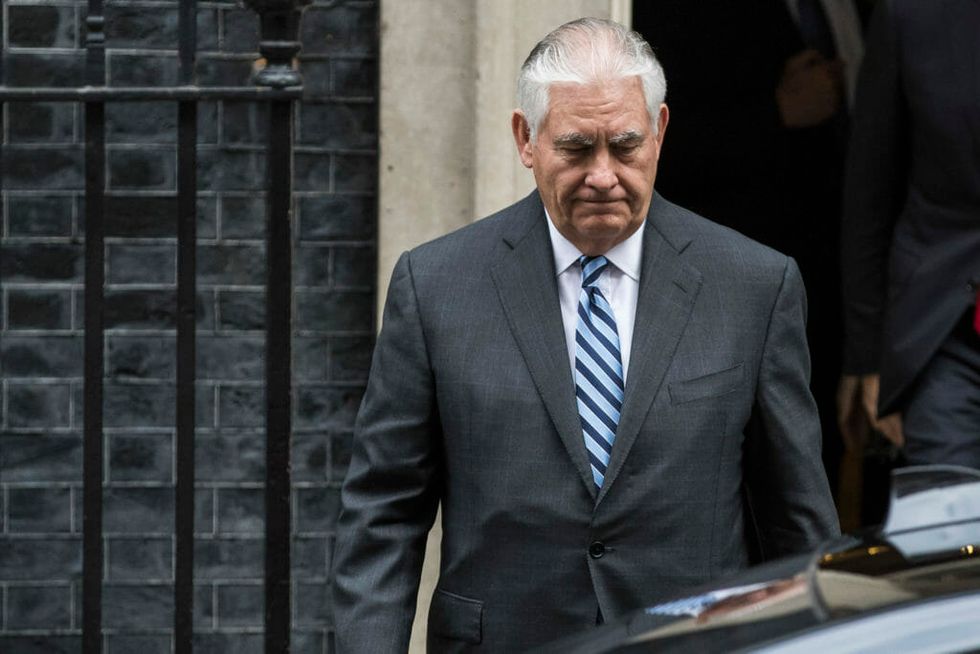 LONDON, ENGLAND - JANUARY 22: US Secretary of State Rex Tillerson leaves 10 Downing Street after meeting Prime Minister Theresa May on January 22, 2018 in London, England. Mr Tillerson is due to hold talks with the Foreign Secretary Boris Johnson and National Security Adviser Mark Sedwill to discuss a range of international issues including the on-going crisis in Yemen. (Photo by Dan Kitwood/Getty Images)

President Donald Trump has fired Secretary of State Rex Tillerson, and CIA Director Mike Pompeo has been named as his replacement. Trump made the announcement on Twitter Tuesday morning, although Tillerson was informed of Trump's decision on Friday. Deputy CIA Director Gina Haspel will take Pomeo's place, assuming she is confirmed by the Senate, becoming the first woman to lead the agency. "Rex is a very good man, I like him a lot," Trump said in a statement. "I made the decision all by myself."

The decision to give Tillerson the boot appears to be directly correlated to Trump's foreign policy goals, and, perhaps, Tillerson's generally stronger stance on Russia than that of the Trump Administration. On Monday, Tillerson condemned Russia's alleged role in nerve gas attack in Great Britain in what was widely seen as an act of defiance of the administration's party line. It is clear now why he felt so free to speak.

Yesterday, Rex Tillerson was the only member of the Trump administration to acknowledge Russian responsibility for… https://t.co/QwJ8xPPoCh
— Denizcan James (@Denizcan James) 1520946462.0

"There is never a justification for this type of attack — the attempted murder of a private citizen on the soil of a sovereign nation — and we are outraged that Russia appears to have again engaged in such behavior,” Tillerson said in a statement. “From Ukraine to Syria — and now the U.K. — Russia continues to be an irresponsible force of instability in the world, acting with open disregard for the sovereignty of other states and the life of their citizens.”

This was far stronger a condemnation of Russia than the White House was comfortable making.

Potential diplomatic talks with North Korea have also exposed a deepening rift between Trump and Tillerson. Last week, Trump unexpectedly agreed to meet with North Korea to discuss possible denuclearization. In October, Trump tweeted that Tillerson was "wasting his time trying to negotiate with" North Korea.

I told Rex Tillerson, our wonderful Secretary of State, that he is wasting his time trying to negotiate with Little Rocket Man...
— Donald J. Trump (@Donald J. Trump) 1506868259.0

Rumors have circulated around Tillerson's potential departure for months, although the President has, up until today, publicly denied any intention to oust our country's top diplomat.

According to one State Department official, Tillerson "had every intention of staying" in his post, and Tillerson found out he was fired from Trump's tweet.

Pompeo issued a statement expressing his gratitude and offering his praise of Trump and Haspel. "I am deeply grateful to President Trump for permitting me to serve as Director of the Central Intelligence Agency and for this opportunity to serve as Secretary of State," Pompeo said. "His leadership has made America safer and I look forward to representing him and the American people to the rest of the world to further America's prosperity."

Here is an updated list of high-level Trump firings, for your fantasy Trump bingo league.