Donald Trump Just Posted a Bizarre Throwback Thursday Video to Announce His Signing of the Farm Bill, and People Are Shook 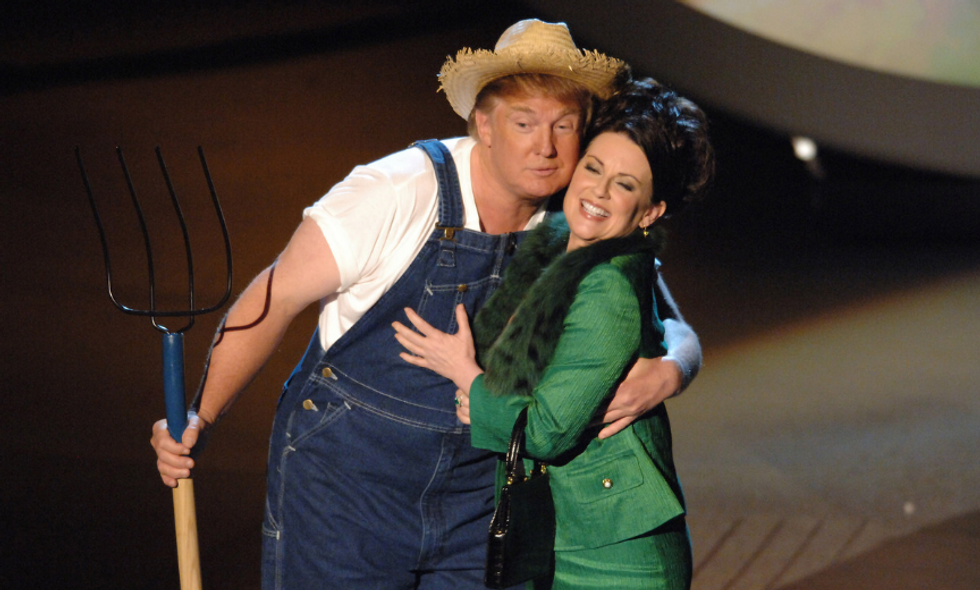 In advance of his signing the recently passed Farm Bill on Thursday, President Donald Trump tweeted out a bizarre #ThrowbackThursday video of himself dressed as a farmer performing the Green Acres theme song with actress Megan Mullally.

Backstory: When Ellen Degeneres hosted the Emmy Awards in 2005, she created "Emmy Idol," which featured pairs of celebrities performing musical acts. At the time, Trump starred on The Apprentice and Mullally was on Will & Grace. Their duo won Degeneres's competition.

It wasn't long before a mortified Mullally responded to the tweet.

It sounds like she'll be going into Anastasia Beaverhausen mode for a while.

So, what do the Emmys have to do with the Farm Bill?

In short: Trump dressed up as a farmer at an Emmy Awards show once (one of which he did not win) and since today is Thursday, the president made it his throwback so he could toot his own horn.

"That was from the Emmy's. I sang Green Acres and received a very nice award that night," Trump said before signing the Farm Bill.

Trump has never won an Emmy.

Some people thought this was a parody account. Nope, that's our president.

@JulieBehre I got nothing. Including scotch. Which I desperately need after this video.
— Angry Staffer (@Angry Staffer) 1545337677.0

Lots of things today have surprised me. But I never thought this morning that I was going to watch a video of Donal… https://t.co/wkVxJTwqYO
— Ginger Gibson (@Ginger Gibson) 1545337172.0

Others were bothered by Trump joking about farmers while American agriculture struggles because of the president's trade wars.

Trump parodying farmers is not the best way to endear himself.

The president is facing a government shutdown. He’s tweeting about his old Emmy appearance spoofing farmers in the… https://t.co/DgXYl7FeKA
— Maggie Haberman (@Maggie Haberman) 1545338640.0

Then there are those who feel like the end is nigh.

This timeline is relentless.