Donald Trump Thinks He Has the Power to Build His Border Wall Without Congressional Approval, and He Just Said He's Considering It 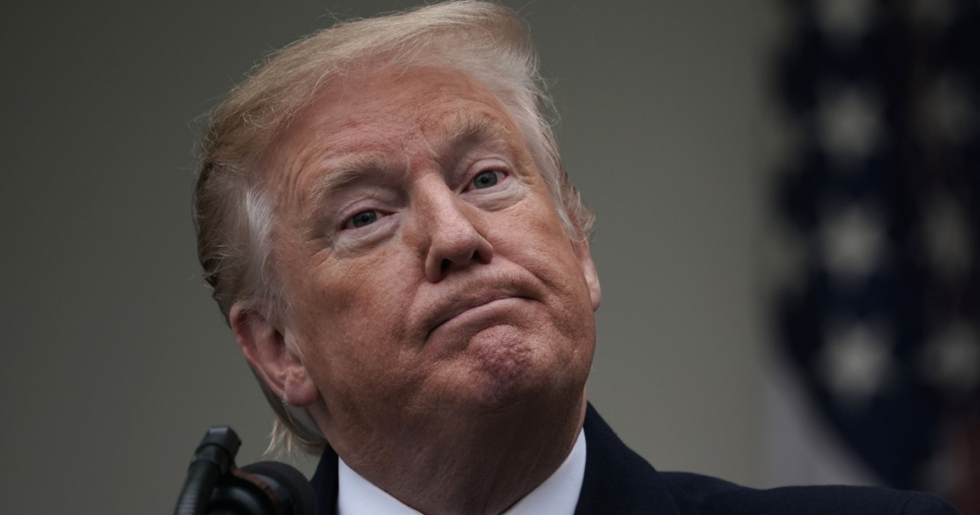 WASHINGTON, DC - JANUARY 04: U.S. President Donald Trump speaks in the Rose Garden of the White House on January 4, 2019 in Washington, DC. Trump hosted both Democratic and Republican lawmakers at the White House for the second meeting in three days as the government shutdown heads into its third week. (Photo by Alex Wong/Getty Images)

President Donald Trump on Friday teased about invoking emergency powers to enable the construction of a border wall, sparking concerns over a possible power grab amidst his third government shutdown.

The president apparently believes he can bypass Congress, which wields the power of the purse, as the stalemate over border security funding enters its third week.

Trump met with House Speaker Nancy Pelosi (D-CA) and Senate Minority Leader Chuck Schumer (D-NY) at the White House on Friday to continue negotiating the reopening of the government. No deal was reached as Trump and Vice President Mike Pence are holding firm on their $5 billion demand for a border wall.

During an hour-long press conference, Trump said he is considering declaring a national emergency over illegal immigration.

"We can call a national emergency over the security of our country, absolutely," Trump told reporters in the Rose Garden. "Now, we can do it. I haven't done it. I may do it, I may do it."

Trump said he can "call a national emergency" and erect a border wall "very quickly," but emphasized that he would prefer to go "through a negotiated process."

But one thing a national emergency can't do is spend money that hasn't been appropriated by Congress. So all Trump… https://t.co/SDJtIXeDAS
— Gregory Korte (@Gregory Korte) 1546631986.0

So the question will be: Which current military construction projects does Trump believe are "not essential to the… https://t.co/EbUlHGK93z
— Gregory Korte (@Gregory Korte) 1546637224.0

Still, people are understandably worried that Trump is inching toward dictatorship.

@Newsweek That’s now a dictatorship via democratic means. You will never get rid of him. Erdogan pulled the emergen… https://t.co/IR42FdVJZd
— MarvinaSky (@MarvinaSky) 1546636362.0

Others think Trump is off his rocker.

So much for making deals.

@Newsweek We see right here some of the great negotiating skills that led to bankruptcies and unpaid craftsmen.
— ancientgreek (@ancientgreek) 1546636418.0

When asked if he was blustering as a threat to Democrats, who now hold the majority in the House of Representatives, Trump said: “I never threaten anybody, but I am allowed to do it.”

NBC News reported Friday evening that Pentagon and Homeland Security officials are discussing what options Trump has, including declaring a national emergency. One official said the administration is taking this possibility seriously.

"Depending on the severity of the crisis, it’s always been an option," the official said. "Now that things are getting worse, we are looking at how that could be operationalized and used to confront the crisis."