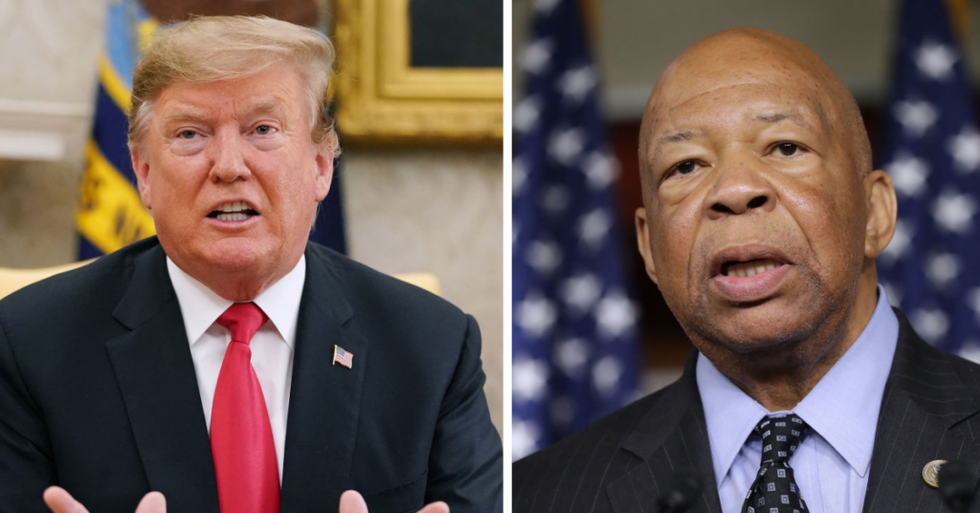 Reports emerged on Thursday night that Cummings's home had been broken into on Saturday, hours before Trump began his original tweets calling Baltimore a "rat and rodent infested mess" where "no human being would want to live," and before he called Cummings a "brutal bully" and a "racist."

Apparently the existence of crime in Baltimore was all that Trump needed to vindicate his assertions, because he soon took to Twitter to gloat.

Trump, who describes himself as "the least racist person in the world," has repeatedly attacked Cummings and Baltimore barely two weeks after saying four American congresswomen of color should "go back" to their countries instead of being critical of American policies.

People were astonished at how petty and unpresidential Trump's tweet was, even for him.

@realDonaldTrump You are a sick, twisted evil sociopath. How DARE you joke about a US Congressman’s (or anyone else… https://t.co/adTLEFXNEj
— Andy Ostroy (@Andy Ostroy) 1564752088.0

@realDonaldTrump imagine being this broken inside
— Jeff Tiedrich (@Jeff Tiedrich) 1564747358.0

Trump's supporters soon followed his lead in celebrating the robbery and home invasion of one of the country's most esteemed lawmakers.

@realDonaldTrump Trump haters, when will you finally open your eyes and show love to our God appointed President?
— BadAsVlad (@BadAsVlad) 1564747180.0

There is, however, one consolation against the indecency.

@realDonaldTrump The ONLY great thing about your potato brained tweets is that they HAVE to be preserved for all et… https://t.co/F9RTydqOLn
— Emma Kennedy (@Emma Kennedy) 1564747764.0