Video Reveals Trump Trying to Stay on Message in El Paso Hospital, But After He Met a Trumper It Went Predictably Downhill 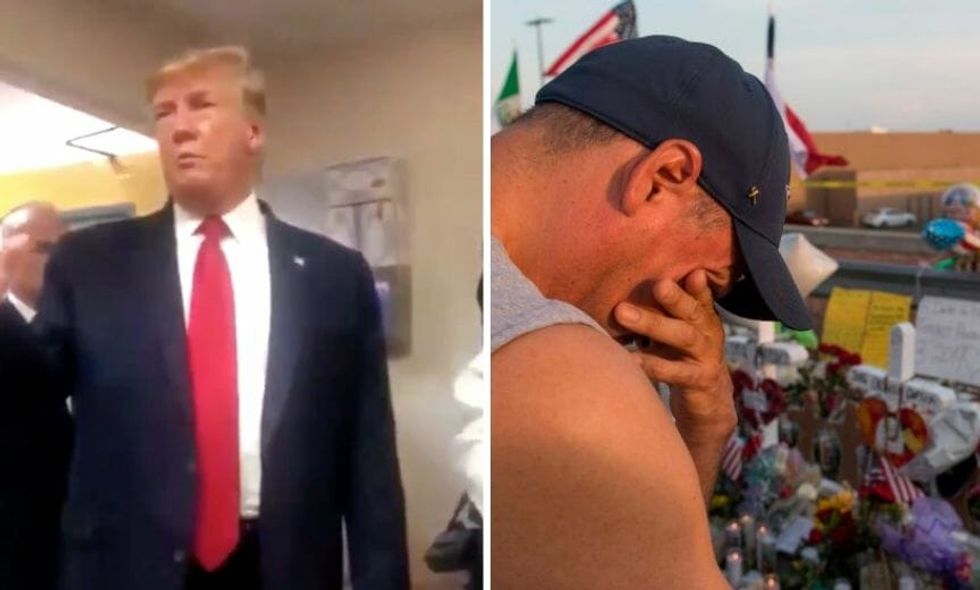 President Donald Trump visited University Medical Center where victims were recovering after an anti-immigrant shooting in El Paso, Texas this past weekend which killed 22 people.

While none of the still-hospitalized victims agreed to meet with Trump, whose immigration rhetoric often mirrors the ideology of the shooter, he took pictures with medical workers. Press wasn't allowed inside the hospital, but Trump's team filmed and edited videos of the visit which were later edited and shared to Twitter by the president.

Addressing the medical team, Trump attempted to stay on script and keep the focus on them, reminding the staff that "the whole world" was "talking about them." Trump alluded to a rally he held in El Paso earlier this year, to which a supporter at the hospital responded that he was in the front row.

“That was some crowd. And we had twice the number outside. And then you had this crazy Beto. Beto had like 400 people in the parking lot. They said his crowd was wonderful.”

The supporter then revealed his Trump themed socks, to which the president responded, "Don't tell it to the press, because they won't even believe it.

This is viewer video of President @realDonaldTrump and @FLOTUS at @umcelpaso meeting with victims and medical staf… https://t.co/Ex3u6T1o4u
— CBS4Local (@CBS4Local) 1565235146.0

Before and after the visit, Trump lashed out on Twitter at O'Rourke, as well as numerous other lawmakers and media personalities.

It drew people to one conclusion: The man just can't help himself.

@CBS4Local @realDonaldTrump @FLOTUS @umcelpaso The first part of this was so good, but then he has to shift to talk… https://t.co/tufubVjBtr
— Brian Bruce (@Brian Bruce) 1565273676.0

Trump has proven since the first days of his presidency that crowd size, for him, is a barometer for righteousness. Some would even call it an obsession.

Trump still owes over $500,000 to the city of El Paso for resources used at the very rally that he references in the video.