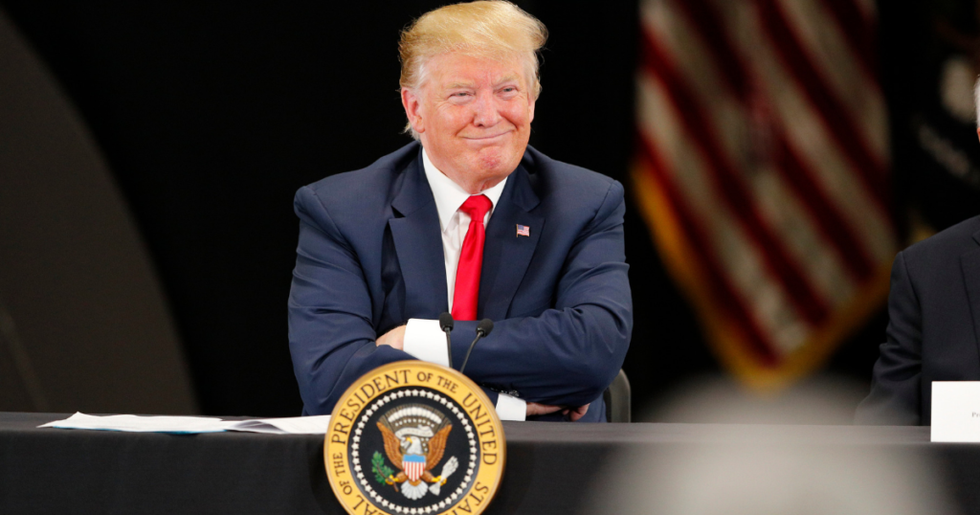 BURNSVILLE, MN - APRIL 15: U.S. President Donald Trump speaks at a roundtable on the economy and tax reform at Nuss Trucking and Equipment on April 15, 2019 in Burnsville, Minnesota. At the special Tax Day roundtable Trump gave a defense of his 2017 tax cuts.(Photo by Adam Bettcher/Getty Images)

Millions of Christians across America celebrated Easter on Sunday—attending church services, hunting eggs, feasting with family, and thanking their version of God.

In a way, Donald Trump also spent Easter worshipping at the altar of his God: himself.

The President took to Twitter to wish his followers a happy Easter, using the platform and occasion to gloat about the economy and his satisfaction with his own performance.

Happy Easter! I have never been happier or more content because your Country is doing so well, with an Economy that… https://t.co/mDTlFUFVpq
— Donald J. Trump (@Donald J. Trump) 1555844641.0

The message comes just days after a redacted version of the Mueller Report was released to lawmakers and the public, detailing the attempts of the President to hinder the Special Counsel investigation by asking others to lie.

@realDonaldTrump Only you would make the resurrection of Jesus about yourself. WWJD...amiright?
— Dana Goldberg (@Dana Goldberg) 1555846012.0

@realDonaldTrump This isn’t an Easter message. This is a message from a narcissist who isn’t capable of showing co… https://t.co/qECDO51KEK
— Shelly Splainin’ (@Shelly Splainin’) 1555845282.0

@realDonaldTrump So the Easter message from the most biblical, Christian President we've ever had is that the Economy is Risen.
— Kris (@Kris) 1555846035.0

@realDonaldTrump That is a super weird series of thoughts to throw out as if it was a rational Easter message.
— Kara McKeen (@Kara McKeen) 1555909860.0

Some saw it as cheapening a holiday that, for Christians, is spent reflecting on the crucifixion and resurrection of Christ.

People are proud to be saying Merry Christmas again. I am proud to have led the charge against the assault of our c… https://t.co/TDmO0lcYHA
— Donald J. Trump (@Donald J. Trump) 1514170579.0