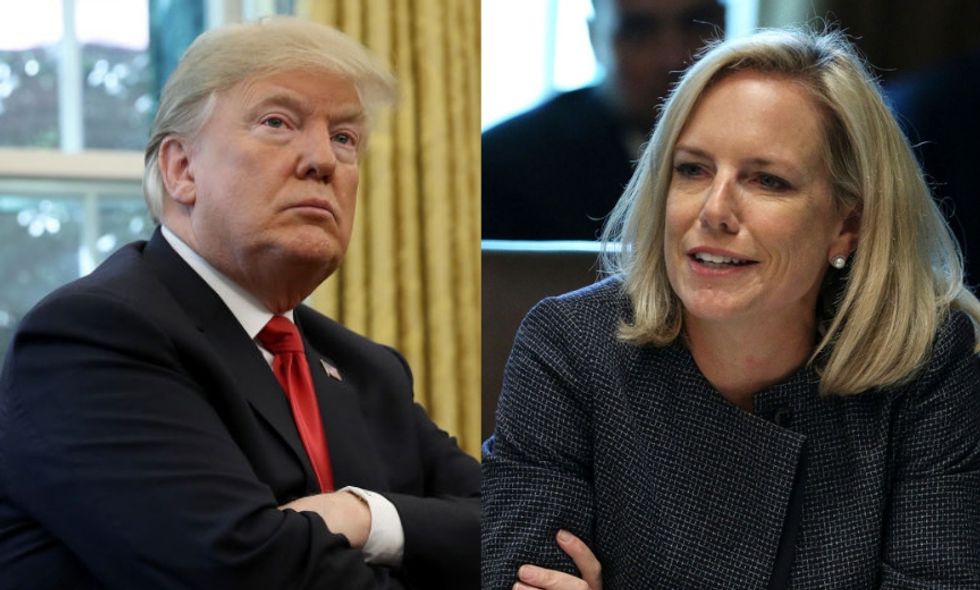 With growing skepticism as to whether or not President Donald Trump's long-sought wall at the United States' Southern border will receive funding in the next budget plan, the Department of Homeland Security released a document called Walls Work. The report documents portions of Southern border walls that have been completed or are expected to be completed before the end of next year.

In his fight for funding, Trump has increasingly proclaimed that "tremendous" portions of the wall have already been built (though these are technically fences, many of which have been around since the 1990s).

The report from the Department of Homeland Security—headed by Secretary Kirstjen Nielsen—was seeking to bolster his claims with its report, however people began to notice that something was off about the statement.

The statement doesn't use article adjectives multiple times. While the DHS may have thought it was being efficient, the impact backfired, with the statement sounding like it was written by a caveman:

"DHS is committed to building wall and building wall quickly. We are not replacing short, outdated and ineffective wall with similar wall...Prior to President Trump taking office, we have never built wall that high."

It wasn't long before Twitter began doing its work.

It wasn't long before users began speculating what happened.

A few even teased that Russian treachery was afoot.

The report boasts construction of miles of bollard walls (walls constructed of large steel girders with spaces between each), however the bollards don't fit the descriptions of walls described by the President nor do any resemble the prototypes touted by Trump earlier this year.

The memo's content is taking about as much flack as its composition.

@DJGrothe @jaketapper One, walls as described don't "work". Two, the fence that they claim is new is the same fence… https://t.co/vxdxygUT7F
— CarlSaganIsMyDaddy (@CarlSaganIsMyDaddy) 1544711864.0

There is literally not a shred of evidence in this puerile DHS memo that “walls work” https://t.co/WThqKPQgfA
— Peter Spiro (@Peter Spiro) 1544714689.0

It is unclear if Donald Trump will follow through with his claim that he'd be "proud" to shut down the government for border security, which he says requires a border wall. The American people will know at midnight on December 21 whether or not the government will be fully operational.