We Now Know Why Donald Trump Doesn't Care About Growing the National Debt, and It's the Most Trump Thing Ever 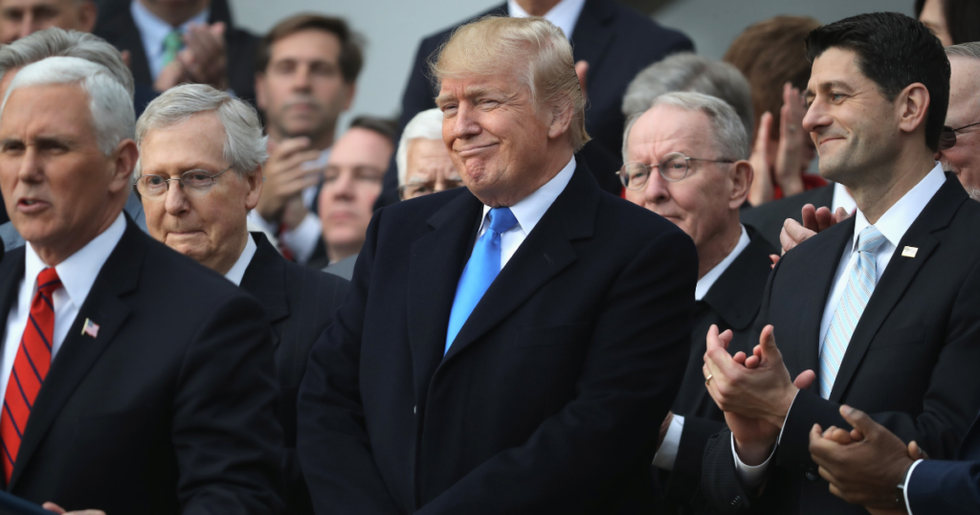 WASHINGTON, DC - DECEMBER 20: U.S. President Donald Trump, flanked by Republican lawmakers, celebrates Congress passing the Tax Cuts and Jobs Act on the South Lawn of the White House on December 20, 2017 in Washington, DC. The tax bill is the first major legislative victory for the GOP-controlled Congress and Trump since he took office almost one year ago. (Photo by Chip Somodevilla/Getty Images)

President Donald Trump reportedly does not really care about the ballooning national debt, according to sources he spoke to shortly after taking office.

The Daily Beast reported on Wednesday that individuals close to Trump during his early days as president recall Trump brushing off warnings about the debt reaching "critical mass" in the early 2020s.

“Yeah, but I won’t be here,” sources recall Trump saying. As a candidate, Trump promised to eliminate the country's debt in eight years.

Throughout his career as a real estate developer, Trump lauded himself as the "king of debt." He went bankrupt six times and relied heavily on foreign financing — particularly from Russia — to fund his ventures.

So people aren't particularly surprised by Trump's lack of concern.

Trump's attitude, to some, is emblematic of the Republican Party, which historically has slashed taxes, exploded the federal deficit, and led the country into recessions.

@samstein @swin24 @lachlan I know this is infuriating, but isn't this how today's Republican party has approached governing for decades?
— Justin Kemerling (@Justin Kemerling) 1544024173.0

“I never once heard him talk about the debt,” one former senior White House official told The Daily Beast.

“He understands the messaging of it,” the source said. “But he isn’t a doctrinaire conservative who deeply cares about the national debt, especially not on his watch… It’s not actually a top priority for him… He understands the political nature of the debt but it’s clearly not, frankly, something he sees as crucial to his legacy.”

They added: “It’s not like it’s going to haunt him.”

Trump's former legislative affairs director Marc Short, on the other hand, said Trump does recognize “the threat that debt poses." But federal spending, Short said, is the real problem.

“But there’s no doubt this administration and this Congress need to address spending because we have out-of-control entitlement programs,” Short said. "It’s fair to say that... the president would be skeptical of anyone who claims that they would know exactly when a [debt] crisis really comes home to roost.”

Other people close to Trump told The Daily Beast a similar story.

Hogan Gidley, the White House Deputy Press Secretary, said Trump has taken measures to reduce the debt, “including in his first budget that actually would’ve balanced in 10 years, a historic, common-sense rescissions proposal.”

Like Short, Gidley said the fix is up to Congress.

“While the president has and will continue to do everything in his power to rein in Washington’s out-of-control spending,” he said, “the Constitution gives Congress the power of the purse and it’s time for them to work with this president to reduce the debt.”

Stephen Moore, an economic advisor to Trump, has urged the president to focus on growth as a means a debt reduction.

“That was why, when he was confronted with these nightmare scenarios on the debt, I think he rejected them, because if you grow the economy… you don’t have a debt problem. I know a few times when people would bring up the enormous debt, he would say, ‘We’re gonna grow our way out of it.’”

So far, that has not happened.

Trump's budgets will add more than $4 trillion to the debt by 2021. Under Trump, the national debt has surpassed $21.8 trillion. It was $20.245 trillion when he entered the White House. This is inspite of quarterly growth of more than four percent in 2018.

One additional takeaway Twitter has from all this is that Trump said he will one day be out of office.

@samstein @swin24 @lachlan Once he's voted out of office and the economy is collapsing, they can blame it on the Democrat replacing him.
— Machine Pun Kelly (@Machine Pun Kelly) 1544025789.0

@samstein @Greytdog @swin24 @lachlan Does this mean @realDonaldTrump is thinking of resigning or being impeached perhaps next year?
— Hal Donahue (@Hal Donahue) 1544030594.0

This, however, was before Trump got his first taste of power. Nevertheless, Trump was very concerned over the debt while Barack Obama was in office.

Funny to hear the Democrats talking about the National Debt when President Obama doubled it in only 8 years!
— Donald J. Trump (@Donald J. Trump) 1512008594.0