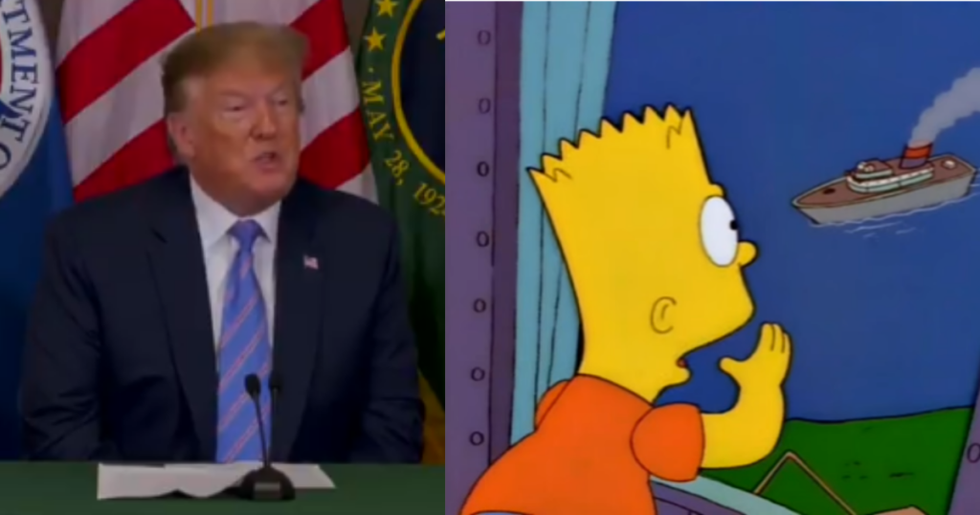 During a visit to the US-Mexican border on Friday, President Donald Trump delivered a new warning to asylum-seeking immigrants: go away, America is closed.

Speaking at a press conference with Border Patrol officials in Calexico, California, Trump urged immigrants to go home, claiming that the United States is at capacity.

This probably sounds familiar if you are a fan of The Simpsons.

Bart Simpson said almost exactly the same thing when he and his family took a road trip to The Big Apple in "The City of New York vs. Homer Simpson," which aired in the show's ninth season.

"Hey immigrants! Beat it! Country's full!" the 10-year-old shouted from the Statue of Liberty's crown as a ship full of immigrants entered New York Harbor.

Yeah, we totally lack available space in the US.

The entire presser was nutty.

Moments after setting the American dream on fire, Trump struggled to explain how walls work.

"Usually that 35 percent is coming around, they're not going over because when people are watching they're not going over," Trump said of refugees attempting to enter the United States via Mexico. "They're going around where it ends, so it goes and it ends and they'll go around, so it's basically 100 percent effective in terms of going through."

Trump's engineering prowess was on full display, as was his affinity for professional mountaineers who may or may not attempt to scale the border wall.

The president also suggested that asylum seekers are running a scam.

"Asylum - you know, I look at some of these asylum people, they're gang members. They're not afraid of anything. They have lawyers greeting them. They read what lawyers tell them to read...they say, 'I fear for my life.' They're the ones causing fear for life. It's a scam."

Then there was this rant about doors and property values:

Trump tells a weird story about how Presidents Bush and Obama built a "not good-looking wall" along the Rio Grande,… https://t.co/Pz36mVcspB
— Aaron Rupar (@Aaron Rupar) 1554494835.0

Trump repeated his lie about the country being full when he instructed immigration officials to ignore due process and deport asylum-seekers.

"You don't have to take them in," Trump said (yes we do, per international law). "When your system is packed, you cannot get another person in. When every one of your detention areas is teeming you have to let people into a country that can't take them, can't take them. We don't have room. That means you can't take them."

And for a third time, because repetitive redundancy is fun.

"When it's full, it's full. You can't take them," Trump reiterated before passing the buck to Mexico. "They go back to Mexico and Mexico will bring them back to their country. Or if they're Mexican, it's a step easier, frankly."

Asked if his views on asylum were unconstitutional, Trump said of California's Democratic Governor Gavin Newsom, who alleged it: "Newsom, honestly, is living in a different world... the people of California want to be safe... we have a full system. Nothing we can do."