Donald Trump Made Some Bizarre Comments About Climate Change to The Washington Post, and People Don't Even Know Where to Start 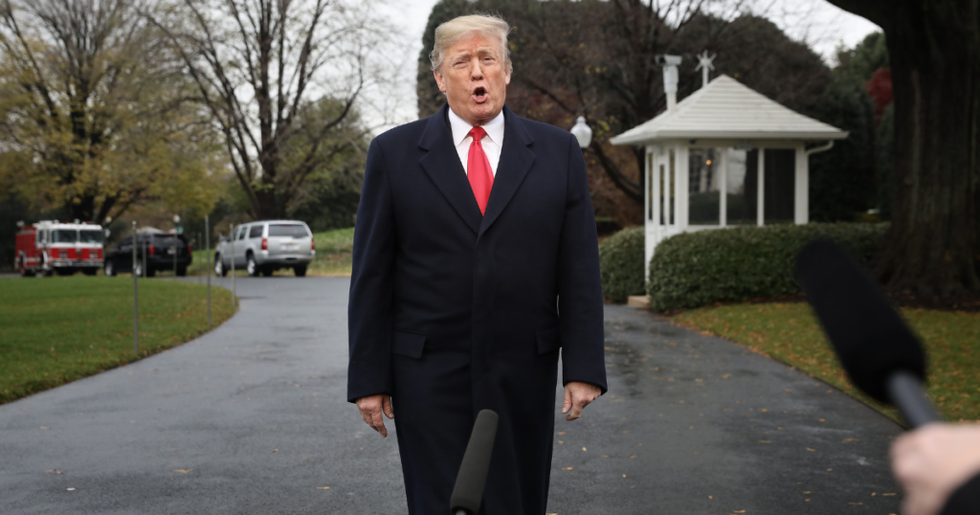 The Washington Post published an exclusive interview with President Donald Trump on Tuesday, and it is getting a lot of attention for his comments on climate change.

But not for any reason the president might have hoped for. Remember the scene in Billy Madison when Billy rambled on about the Industrial Revolution? We're living it.

First of all, he explained that while he acknowledges that climate is changing, he rejects the notion that it is man-made.

Normally I would paraphrase but the president's remarks are so unbelievable they should speak for themselves.

"One of the problems that a lot of people like myself, we have very high levels of intelligence, but we're not necessarily such believers."

Our air and water are not at "record clean."

"And when you’re talking about an atmosphere, oceans are very small. And it blows over and it sails over."

How interesting that Trump thinks the oceans are so small, though he had quite a different take earlier this year when bigger oceans better suited his narrative.

Trump also alluded to "articles" about "global freezing" to make his point.

“If you go back and if you look at articles, they talk about global freezing,” Trump said. “They talk about at some point, the planet is going to freeze to death, then it’s going to die of heat exhaustion.”

The Post noted Trump was referencing two pieces from the 1970s which were published prior to today's scientific consensus.

Trump's incorrect, internalized conclusion is four decades old. This is not good.

Additionally, Trump has buckled into a bizarre explanation for the climate change-fueled California wildfires. The president blames a lack of raking and forest floor maintenance for the destruction, which has so far claimed 88 lives and decimated entire towns.

“The fire in California, where I was, if you looked at the floor, the floor of the fire they have trees that were fallen, they did no forest management, no forest maintenance, and you can light — you can take a match like this and light a tree trunk when that thing is laying there for more than 14 or 15 months. You go to other places where they have denser trees — it’s more dense, where the trees are more flammable — they don’t have forest fires like this, because they maintain.”

“You go to other places where they have denser trees, it’s more dense, where the trees are more flammable, they don’t have forest fires like this because they maintain. And it was very interesting I was watching the firemen, and they were raking brush. . . . It’s on fire. They’re raking it, working so hard. If that was raked in the beginning, there would be nothing to catch on fire.”

@jdawsey1 This might be the best proof that he's completely unable to process a coherent thought. Ignore the climat… https://t.co/na2ZX6kZzS
— Wendy Cerne (@Wendy Cerne) 1543363257.0

Katharine Hayhoe, report author and director of the Climate Science Center at Texas Tech University, defended her research on Twitter.

“I wrote the climate scenarios chapter myself," Hayhoe said, "so I can confirm it considers ALL scenarios, from those where we go carbon negative before end of century to those where carbon emissions continue to rise."

Andrew Dessler, a professor of atmospheric sciences at Texas A&M University, called Trump's comments "idiotic" in an email with WaPo.

“How can one possibly respond to this?” Dessler asked rhetorically.

Trump is not the only member of the administration refusing to accept the conclusions of its own scientists.

White House Press Secretary Sarah Huckabee Sanders was fact-checked live by CNN Tuesday after she misrepresented the report and the science behind it.

“It’s not based on facts. ... It’s not data-driven,” Sanders said at a press briefing. “We’d like to see something that is more data-driven. It’s based on modeling.”

Sanders said the report “is based on the most extreme model scenario which contradicts long-established trends,” which Brooke Baldwin pointed out is simply not true.

“Fact,” Baldwin interjected. “The report 4 years in the making involved 300 leading climate change scientists in 13 federal agencies. That is the president’s own federal government.”

Sanders continued her forum on how to scuddle science.

“Modeling the climate is an extremely complicated science that is never exact,” she added. “The biggest thing we can do is how to make sure we have the cleanest air, the cleanest water, and the president is certainly doing that and certainly leading on that front” (except he isn’t; more on that later).

Sanders’ oversimplification is very misleading, noted Baldwin. “It is false of anyone to suggest the report was only based on extreme scenarios,” she said, referencing the report’s range of best to worst climate outcomes.

Baldwin also pointed out that despite Sanders’ line about climate science not being “exact,” researchers agree that most models have “underpredicted the impact of climate change on ice melt, sea level rises, and increases in extreme weather.”

The Fourth National Climate Change report released last Friday is the latest dire warning from climate scientists that the consequences of a warming planet are now unavoidable and the damage irreversible.

“While mitigation and adaptation efforts have expanded substantially in the last four years,” stated the report, “they do not yet approach the scale considered necessary to avoid substantial damages to the economy, environment, and human health over the coming decades.”

The FNCC panel’s research predicts economic losses from climate change of up to ten percent of the American economy by the end of the century.

“With continued growth in emissions at historic rates,” the report said, “annual losses in some economic sectors are projected to reach hundreds of billions of dollars by the end of the century—more than the current gross domestic product (GDP) of many U.S. states.

A United Nations report issued on Tuesday reiterated the need to immediately curb carbon emissions if humanity is to be spared the climate's worst wrath.

Efforts to cut pollution need to be tripled in order to keep the planet's warming to under two degrees Celsius, which most climate scientists now agree is either at or beyond the point of no return.

“There is still a tremendous gap between words and deeds, between the targets agreed by governments and the measures to achieve these goals," said Gunnar Luderer, an author of the UN report and senior scientist at the Potsdam Institute for Climate Impact Research in Germany.

“Only a rapid turnaround here can help," pressed Luderer. "Emissions must be reduced by a quarter by 2030 [to keep warming to no more than 2C (3.6F) above pre-industrial levels] and for 1.5C emissions would have to be halved.”

No one is coming to save us.