Donald Trump Just Made a Questionable Claim About Barack Obama's Treatment of Russia, and the Internet Can't Even 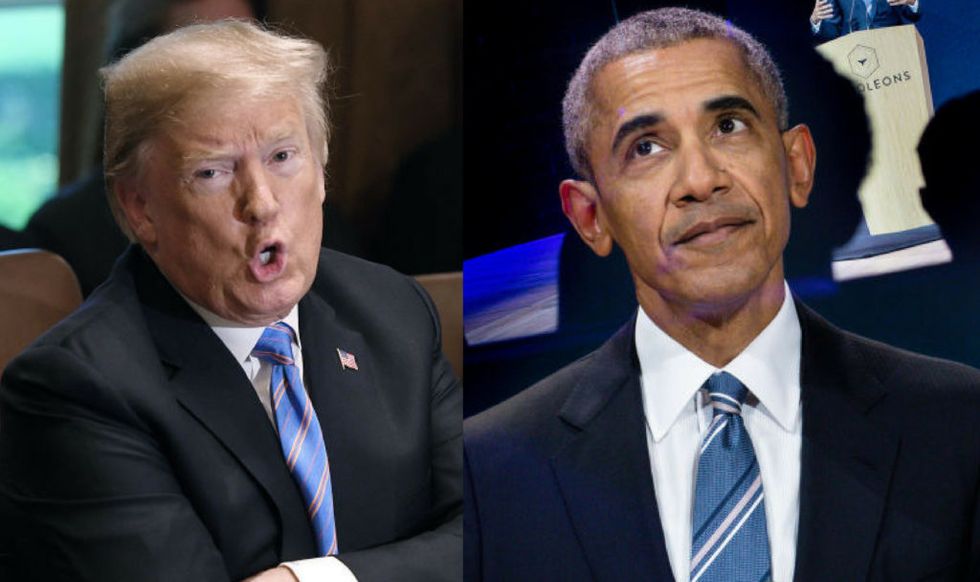 In an interview for CNBC, President Donald Trump decried former President Barack Obama for his supposed leniency toward Russia.

Look at the sanctions I put on, look at the diplomats I threw out...Nobody else did what I've done. Obama didn’t do it. Obama was a patsy for Russia, he was a total patsy.

Trump then referred to a 2012 exchange between then-President of Russia Dmitry Medvedev and then-President Obama. Caught on a hot mic, Obama discussed missile defense, telling Medvedev that he would have "more flexibility" on the issue after his election. The exchange occurred months before current Russian President Vladimir Putin took office again, and two years before Russia's invasion of Southeastern Ukraine and annexation of Crimea, and before any evidence of attempts to meddle with United States elections came to light.

According to Trump, no one talks about the incident, yet then-Republican presidential nominee Mitt Romney blasted Obama for the gaffe during the 2012 campaign. It's also been revived as a Republican talking point since Trump's relationship with Putin has faced increased scrutiny.

For Americans on social media, however, the 2012 exchange on a hot mic in Seoul was not enough to obscure Trump's recent comments at a podium with the whole world watching.

If you’re on the right and twisting and contorting to defend Trump’s comments today, revisit what you said about Ob… https://t.co/YOTOStb1zt
— Jedediah Bila (@Jedediah Bila) 1531784261.0

Yes, Trump has been tougher on Russia than any president, except of course Truman, Eisenhower, Kennedy, Nixon, Ford… https://t.co/dIFSmq0nFA
— Richard Stengel (@Richard Stengel) 1532093581.0

Trump's remarks come days after a speech given by Former President Obama at a South African celebration of the late Nelson Mandela's 100th birthday. The speech didn't mention Donald Trump by name, but many took Obama's words to be in reference to the infamous Helsinki summit the day before:

Strongman politics are ascendant suddenly, whereby elections and some pretense of democracy are maintained, the form of it, but those in power seek to undermine every institution or norm that gives democracy meaning.

It's far from the first time the former President has gotten under Trump's skin.

Some have speculated that Obama's roast of Donald Trump at the 2011 White House Correspondents Dinner motivated Trump to succeed the man who recently polled as the best president of Americans' lifetimes. Coupled with Trump's years-long insistence that Obama wasn't born in America, the current president's unyielding animus toward Barack Obama appears to have damaged Trump himself more than its target.

@bryanbehar Trump has an unhealthy obsession with Obama. Trump gave up his right to criticize Obama & Hillary after… https://t.co/wVsqgs4V9z
— Denise Greeley (@Denise Greeley) 1532082172.0

Trump's seeming inability to relinquish grudges has plagued his presidency. Even at the Helsinki press conference with Putin, the president responded to the burning question of whether he'd condemn Russian election meddling with a diatribe about the DNC server and, of course, Hillary Clinton's emails.

To many, it's the current president who is the patsy, not only to Russia but to his own petty vendettas.