Trump Campaign Is Fundraising for Republican Senators Who Oppose His Impeachment 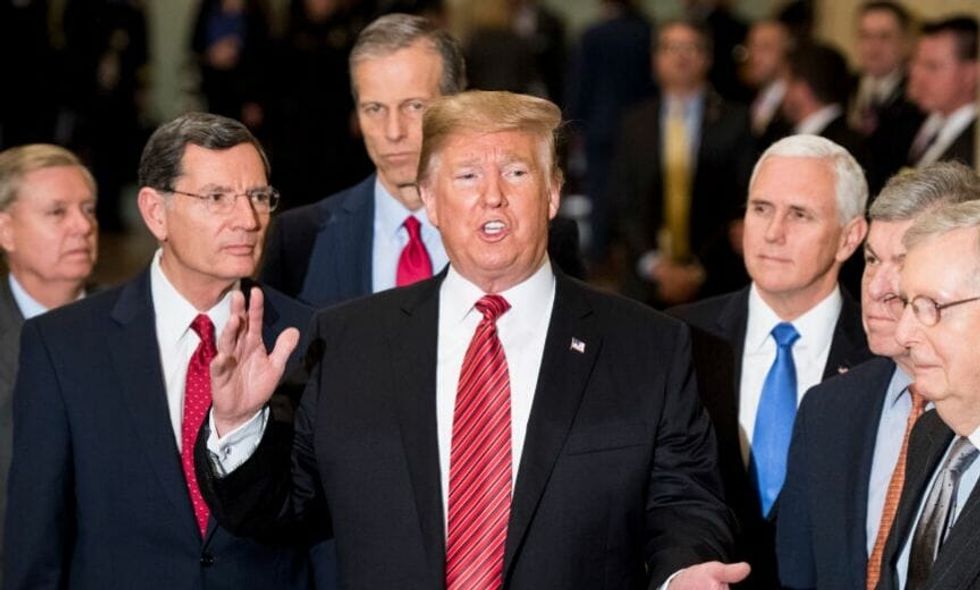 The House of Representatives voted on Thursday to affirm the ongoing impeachment inquiry of President Donald Trump, further bolstering the likelihood that Trump will be fully impeached by the House before the end of the year.

Once the House votes in the affirmative, the articles of impeachment will be sent to trial in the Republican-dominated Senate, and—judging from a recent Trump campaign fundraising email—Trump is already working to ensure that Republican senators don't vote to remove him.

The email urges Trump's supporters to donate to a fund that will be divided among Trump and Republican senators Cory Gardner (CO), Joni Ernst (IA), and Thom Tillis (NC) whose reelections in 2020 are growing more uncertain.

All three of the senators signed a resolution in the Senate condemning the impeachment inquiry in the House.

Legal experts say there's little difference between Trump using his access to drum up money for endangered senators against his impeachment and a defendant bribing a juror.

Senators who were adamant about not prejudging the evidence against Trump because they’ll be jurors need to avoid t… https://t.co/CfeV32mTcv
— Joyce Alene (@Joyce Alene) 1572532910.0

so. to defend him from allegations of a quid pro quo in Ukraine. the president is offering funds to potential jur… https://t.co/lrUK9Lvpdl
— Hayes Brown (@Hayes Brown) 1572547743.0

Are you a Republican Senator? President Trump would like to purchase your impeachment vote. https://t.co/QSzRPrdST1
— Tommy Vietor (@Tommy Vietor) 1572537368.0

Offering a thing of value (campaign money) in exchange for an official act (a Senator voting for or against impeach… https://t.co/n1qss2W0om
— Rick Hasen (@Rick Hasen) 1572535784.0

While Trump's removal from office remains unlikely as long as it maintains near unanimous opposition from Republican voters, the impeachment inquiry in the House is set to embark on a phase of public hearings from former White House officials and others close to the Trump administration.

It's hard to imagine revelations so damning that Republicans would support Trump's removal, but public hearings will almost definitely batter Trump's support and the support of the senators enabling him.

When the hearings are out in the open over 70 percent of the public will want the impeachment and removal of… https://t.co/tcBmE2pAwA
— Anthony Scaramucci (@Anthony Scaramucci) 1572531216.0

Like those who made a wish on the monkey's paw, Republicans will regret their demands for a vote and public impeach… https://t.co/BCveJ8D3Zm
— Amanda Marcotte (@Amanda Marcotte) 1572541717.0

You can donate to the endangered senators' Democratic 2020 opponents here, here, and here.