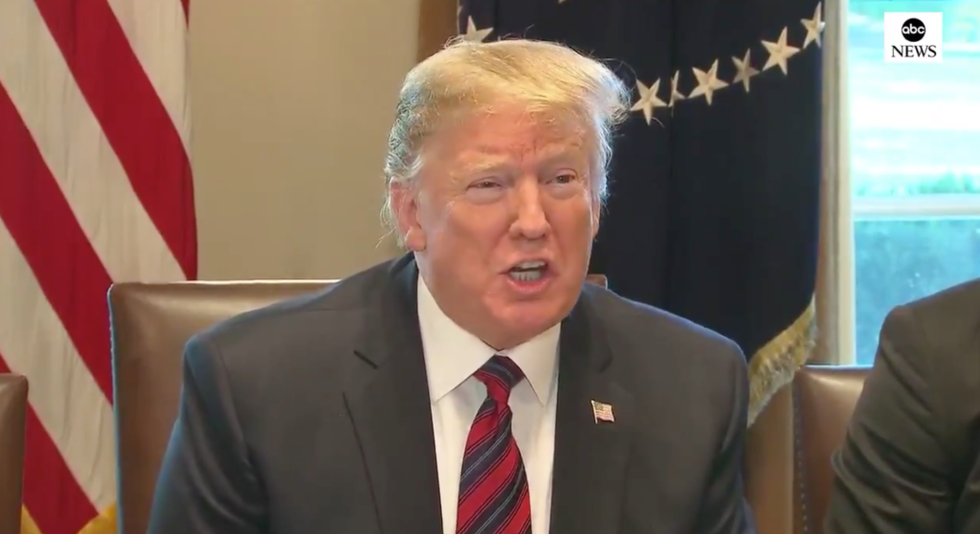 As the current government shutdown over border wall funding is poised to become the longest in history, President Donald Trump demanded Democrats in Congress allocate the $5 billion for a wall at the southern border—a wall which is proven to be ineffective and which the majority of the American public doesn't want.

Semantics have played a large part in the ongoing impasse, with comparisons like "fence vs wall" and "concrete vs steel slats." However, Trump threw an interesting option for the wall's title in the ring earlier this afternoon.

"I ask the Democrats to vote for money for the wall, the barrier, whatever you want to call, it's okay with me. They can name it whatever—they can name it 'peaches,' I don't care what they name it."

The comments indicated an increasing desperation on the side of Trump and Republicans.

With the latest absurd comment, everyone's making a similar joke.

Some joked that "Peaches" was a person.

@KellyO @realDonaldTrump "Peaches?" Is he having some sort of flashback about a former Playmate?
— Janet Volpe (@Janet Volpe) 1547240934.0

Others got a bit more creative.

It reminded many of the song "Peaches" by—funnily enough—Presidents of the United States of America. They soon began citing the lyrics, and they're oddly fitting.

@Acosta I’m movin’ to the country, gonna eat a lot of peaches! -The Presidents of the United States of America
— Jason Koransky (@Jason Koransky) 1547239955.0

But jokes aside, the long-held fear by some that Trump is mentally unstable grew a little deeper.

As the shutdown continues to forge on and federal employees continue to work without pay, Trump's callous rhetoric is anything but peachy-keen.