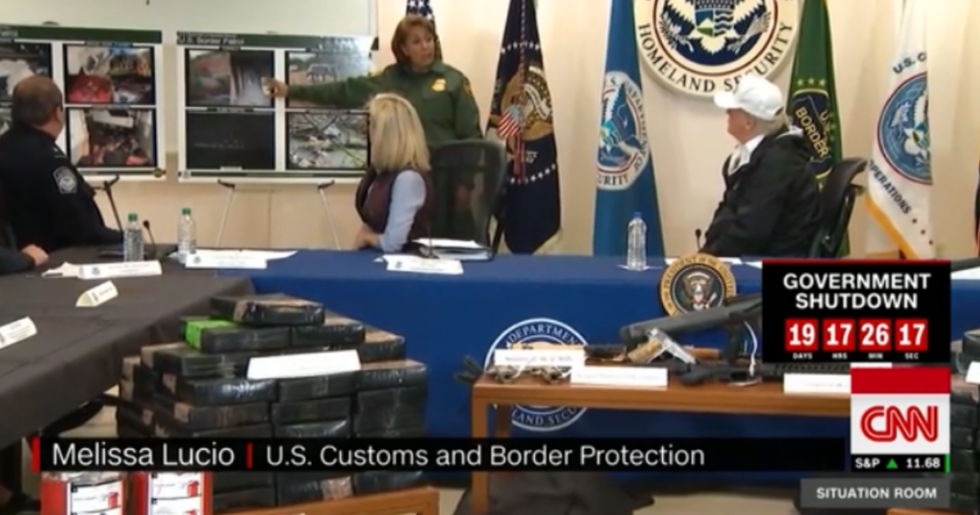 President Donald Trump visited the southern border on Thursday and was presented with an inconvenient truth about walls: people can and do build tunnels to bypass them.

During Trump's trip to McAllen, Texas, Melissa Lucio of Customs and Border Protection showed that walls are not the surefire security measure Trump believes them to be.

"This is just a couple of miles from here, from where we're standing," Lucio said, pointing to photos of tunnels dug underneath existing border wall. "This is a tunnel," she explained. "This is the second tunnel that recently we have located. This is an area that we actually have wall."

Of course people burrow underneath walls, but that is unlikely to change the president's mind.

Trump asserted Thursday that he has the "absolute right" to declare a national emergency in order to fund a border wall with Mexico, for which Trump has promised Mexico would foot the bill. This was the central tenet of his presidential campaign.

In a stunning 180-degree turn, however, Trump said Thursday he never promised Mexico would literally pay for the wall. He also said, falsely, that the country is "under attack by criminal gangs." Trump expanded on this in a tweet Friday morning, warning of an "invasion" that does not exist.

Humanitarian Crisis at our Southern Border. I just got back and it is a far worse situation than almost anyone woul… https://t.co/qeM5wiUfpO
— Donald J. Trump (@Donald J. Trump) 1547222665.0

Earlier this week, Trump claimed that refugees are storming the border with vehicles far more advanced than those used by Border Patrol. Trump has also lied about how many terrorists and illegal drugs have been stopped at the southern border.

@Acosta Well it's a good thing they had pictures so he could understand. Otherwise the words and statistical data would go over his head.
— Michelle L. (@Michelle L.) 1547218165.0

What will his next demand be, a subterranean wall?

Meanwhile, the federal government has been shut down for 21 days - the longest in U.S. history. Negotiations between Trump and House Speaker Nancy Pelosi (D-CA) to reopen the government have failed, and the impasse shows no signs of easing.

Trump keeps moving the goal posts. "I would be proud to shut down the government over border security," he proclaimed last month.

When asked who bears responsibility for the shutdown, Trump said, "the buck stops with everyone" and that "China is more honorable" than "the opposition party."