Donald Trump Just Said the Conditions at Migrant Detention Centers Were Worse Under Obama, and People Are Livid 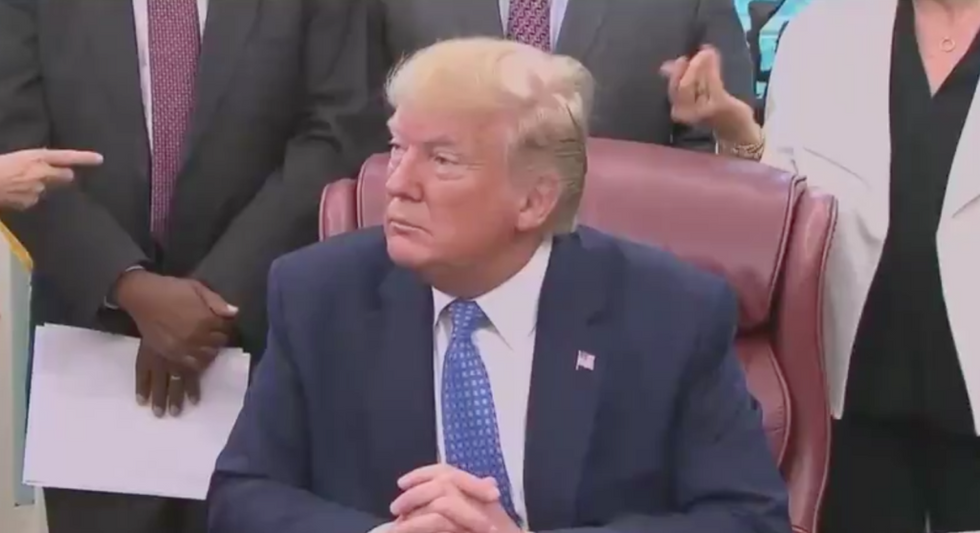 In the Oval Officeon Monday, President Donald Trump claimed that the conditions in migrant detention centers are better than they were under former President Barack Obama.

The conditions of the crowded detention centers have been the subject of scrutiny from Americans everywhere who note that at least 22 immigrants have died in the detention centers in the past two years. At least seven of them were children. Reports of the unsanitary conditions in the facilities have resulted in national outcry. Some lawmakers, newspapers, and historians have likened the facilities to concentration camps.

Reporter: Are you personally concerned about the conditions at these border facilities? "I'm very concerned. And t… https://t.co/5GWjB7zfBi
— POLITICO (@POLITICO) 1561493703.0

Trump expressed concern for the conditions at the border facilities, but claimed they were far better than under President Obama:

"I'm very concerned. And they're much better than they were under President Obama by far...It's in much better shape than it ever was."

Trump's former Homeland Security Secretary, Kirstjen Nielsen, admitted that Customs and Border Protection hadn't had a child die in its care in over a decade until late last year. Since Trump's election, six have died.

Law Professor Warren Binford visited the camps herself and detailed the conditions in one of the facilities:

"Children described to us that they’ve been there for three weeks or longer. And so, immediately from that population that we were trying to triage, they were filthy dirty, there was mucus on their shirts, the shirts were dirty. We saw breast milk on the shirts. There was food on the shirts, and the pants as well. They told us that they were hungry. They told us that some of them had not showered or had not showered until the day or two days before we arrived. Many of them described that they only brushed their teeth once."

One of Trump's Justice Department lawyers recently argued in court that detained children aren't entitled to toothbrushes or soap.

@politico The sociopath, especially Stephen Miller and Donald Trump, besides the pleasure they take in making peopl… https://t.co/FxW755ljbG
— 𝑭𝑶𝑹𝑻𝑰𝑺 (@𝑭𝑶𝑹𝑻𝑰𝑺) 1561493725.0

Conditions at the border among staff are becoming chaotic as well, with Immigration and Customs Enforcement (ICE) agents becoming more frustrated, wondering "what the hell is going on." To top it off, the head of Customs and Border Protection, John Sanders, just resigned.