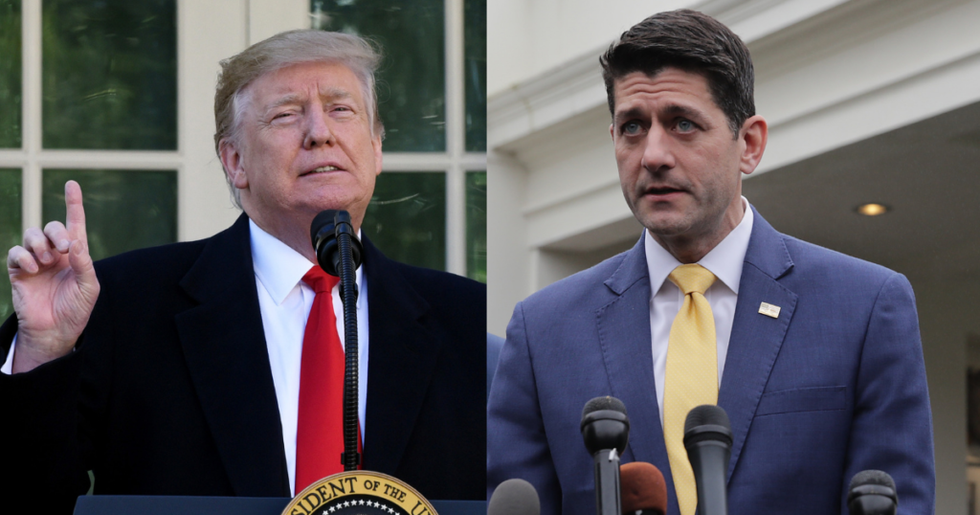 President Donald Trump blamed former House Speaker Paul Ryan (R-WI) for his failure to secure funding for a border wall in an interview with The Daily Caller published on Wednesday.

Despite two years of total Republican control, Trump was unable to get his wall.

And so The Daily Caller asked Trump: "Republicans in charge of Congress for two years didn’t get to your wall promise in Congress. How big of a roadblock to wall funding was Paul Ryan, now that he’s gone?"

Trump recalled that Ryan splintered from his commitment to building a wall after Trump begrudgingly signed last year's $1.3 trillion Omnibus Spending Package because it included substantial funding for the military.

"Well, I was going to veto the omnibus bill and Paul told me in the strongest of language, ‘Please don’t do that, we’ll get you the wall.’ And I said, ‘I hope you mean that, because I don’t like this bill,’ although I love the bill for what it did for the military. And therefore, if it weren’t for the military, I would have vetoed it."

The president repeated his unsubstantiated claims linking the need for a border wall to curtailing human trafficking before accusing Ryan of giving up.

"Humanitarian crisis, trafficking, drugs, you know, everything — people, criminals, gangs, so, you know, we need the wall. And then he went lame duck. And once he went lame duck it was just really an exercise in waving to people and the power was gone so I was very disappointed. I was very disappointed in Paul because the wall was so desperately needed. And I’ll get the wall."

Trump said he does not believe Ryan lied to him, but emphasized his disappointment in Ryan going "lame duck" after deciding to not seek reelection.

"I don’t want to say he lied. I think he probably meant it at the time, I guess. I hope. So I don’t call that lying. But when he went lame duck, meaning, he said he’s not running again — and it was very unusual because usually they’ll do that sometime after an election and he didn’t want to do that because it’s somewhat misrepresenting and I understand that too."

Trump sure does love to play the blame game.

@CNN Trump takes responsibility only for the accomplishments of others and stuff he makes up. Never anything bad, n… https://t.co/pMhUvhgDzy
— Creepy Troll (@Creepy Troll) 1548915958.0

Trump channeled his anger toward the Democrats, who now control the House, in a Twitter blizzard Thursday morning.

"Republicans on the Homeland Security Committee are wasting their time. Democrats, despite all of the evidence, proof and Caravans coming, are not going to give money to build the DESPERATELY needed WALL," Trump tweeted. "I’ve got you covered. Wall is already being built, I don’t expect much help!"

Republicans on the Homeland Security Committee are wasting their time. Democrats, despite all of the evidence, proo… https://t.co/npj2u8TqPZ
— Donald J. Trump (@Donald J. Trump) 1548940861.0

Trump appears unable to keep his story straight, and the public is over it.

@realDonaldTrump Lemme get this straight. We are facing another possible shutdown or declaration of emergency as yo… https://t.co/qdnX22piT1
— Kathy Van Every (@Kathy Van Every) 1548943276.0

@realDonaldTrump You ain't got shit bub. You showed your hand. You blinked. Now you need Congress. And with the amo… https://t.co/wwgzll5koE
— Jeremy Newberger (@Jeremy Newberger) 1548941607.0

No one is forgetting how Trump promised during the campaign that Mexico would pay for the wall, which is never going to happen.

Trump recently oversaw the longest partial government shutdown in history after refusing to support a continuing resolution that included $5.7 billion for border security, though not explicitly for a wall. The partial shutdown began on December 22 while Ryan was still Speaker.

Thanks to pressure by House Democrats led by Speaker Nancy Pelosi (CA), as well as mounting disruptions in air travel, Trump ended the shutdown on January 25 by agreeing to sign the same continuing resolution he rejected in December. The CR funds the government through February 15, at which point Trump has threatened another shutdown or a national emergency declaration if Congress does not agree to fund a wall.