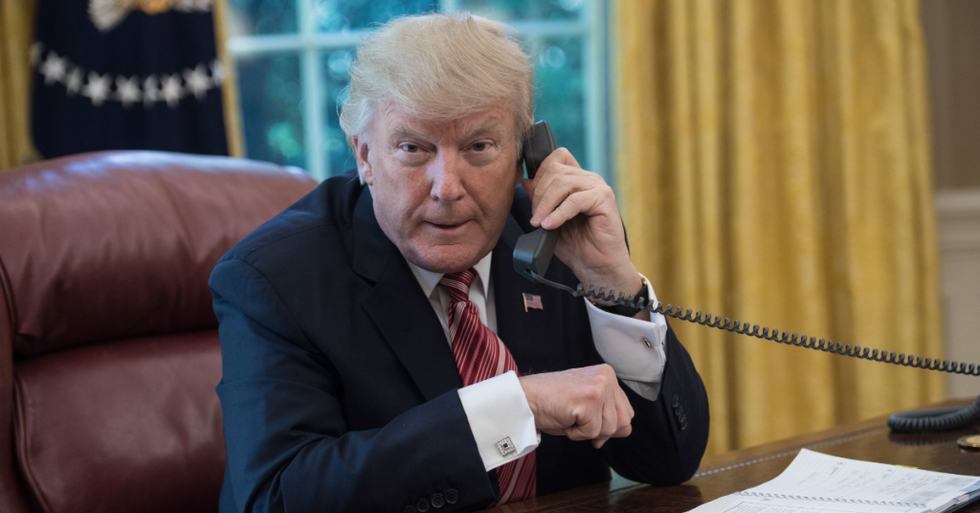 The news keeps getting worse for President Donald Trump.

For weeks, Republican lawmakers assured that there was "no quid pro quo" presented by Trump during his call urging Ukrainian President Volodymyr Zelensky to investigate his political rival, former Vice President Joe Biden. Therefore—as the talking point goes—the impeachment inquiry against Trump is a sham.

There never needed to be a quid pro quo for this to be an impeachable offense, but with Tuesday's testimony of Acting Ambassador to Ukraine, William Taylor, the Republican talking point is effectively sunk.

Taylor is a career diplomat and veteran. His opening statement was 15 pages long and took nearly an hour to complete, but the revelations in it implicate Trump's personal lawyer Rudy Giuliani, Ambassador to the European Union Gordon Sondland, Secretary of State Mike Pompeo, and Donald Trump himself.

Among the most damning allegations are that Sondland told Taylor that Trump insisted on Zelensky publicly announcing an investigation into Biden and a conspiracy theory regarding the 2016 elections before Ukraine would receive any of the congressionally-approved military aid from the US.

At first Taylor was told that the investigations in Ukraine would have to be opened before the two leaders could meet at the White House. He later learned from Sondland that military assistance was conditional on an announcement of these investigations as well.

"Ambassador Sondland also told me that he now recognized that he made a mistake by earlier telling the Ukrainian officials to whom he spoke that a White House meeting with President Zelenskyy was dependent on a public announcement of investigations—in fact, Ambassador Sondland said, 'everything' was dependent on such an announcement, including security assistance. He said that President Trump wanted Zelenskyy 'in a public box' by making a public statement about ordering such investigations."

According to Taylor's testimony, Sondland communicated the same to other officials.

Taylor later confronted Sondland about the conversation and whether or not military aid was dependent on an announcement from Zelensky:

Ambassador Sondland said that he had talked to President Zelenskyy...and told them that, although this was not a quid pro quo, if President Zelenskyy did not 'clear things up' in public, we would be at a 'stalemate.' I understood a 'stalemate' to mean that Ukraine would not receive the much-needed military assistance.'

Taylor was deeply concerned about this arrangement. He also revealed an insight Sondland gave him into Trump's approach to diplomacy:

"Ambassador Sondland tried to explain to me that President Trump is a businessman. When a businessman is about to sign a check to someone who owes him something, he said, the businessman asks that person to pay up before signing the check...I argued to both that the explanation made no sense: the Ukrainians did not "owe" President Trump anything..."

These are only the highlights of Taylor's testimony, which has proven to be the most damning and detailed sequence of events regarding the Trump administration's communications with Ukraine. Taylor kept detailed notes of nearly every correspondence with Ukrainian and American officials alike. Even before the testimony leaked, lawmakers privy to the closed door testimony described hearing "sighs and gasps" during Taylor's opening statement.

People took Taylor's testimony as confirmation that there was, in fact, a quid pro quo. Some even see it as a possible turning point from the Republican bulwark against accountability for the President.

I have rarely read a more devastating indictment of a President and his cronies than that of Taylor. This is chapte… https://t.co/r9ydr8TI3i
— Rick Wilson (@Rick Wilson) 1571775437.0

Yikes. I didn’t think things could get much more damning than that call, but this is really appalling. Everything a… https://t.co/7A2C9AZH2G
— Julian Sanchez (@Julian Sanchez) 1571772771.0

The morning of Taylor's testimony, the White House instructed him not to testify, forcing Congress to issue a last minute subpoena. Unlike many members of the Trump administration, like Rudy Giuliani and Energy Secretary Rick Perry, Taylor complied.