Donald Trump Just Made an Off Color Remark to Antonin Scalia's Widow During His Presidential Medal of Freedom Ceremony, and People Can't Even 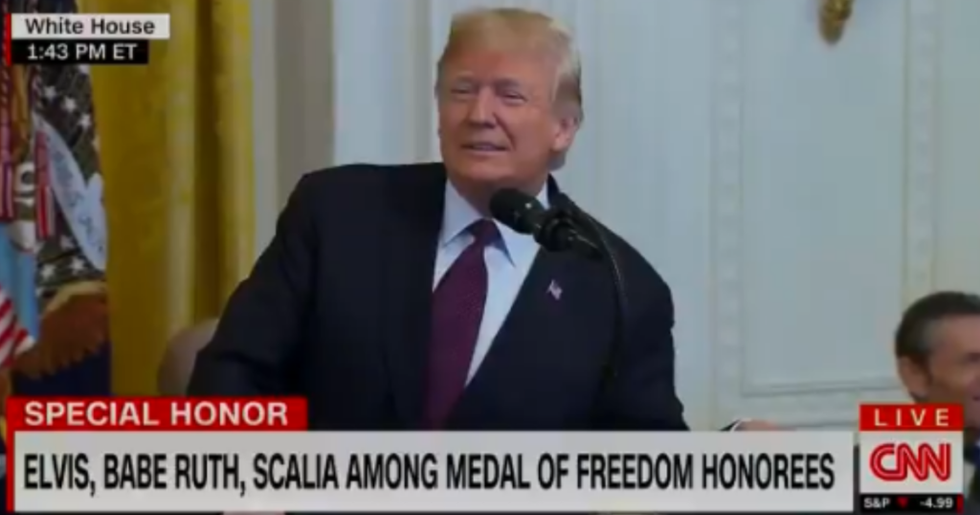 President Donald Trump on Friday awarded the Presidential Medal of Freedom to numerous distinguished individuals, including some who have already passed away.

Among the recipients was the late Supreme Court Justice Antonin Scalia, who died in February 2016. Scalia's wife, Maureen, was in attendance at the ceremony to accept the award on her husband's behalf.

In his praise of Scalia, however, Trump managed to squeeze in a dirty joke about the Scalias' sex life after reading off the names of the couple's nine children.

"You were busy, weren't you?" Trump joked to Mrs. Scalia. "I always knew I liked him."

Watch the president's remarks below:

The president's crass lack of decorum was met with disgust on social media.

"Boorish," one user said of Trump.

@RVAwonk He literally cannot do anything with decorum or without being a national embarrassment. Can't this be over now?
— sassygurl (@sassygurl) 1542394599.0

Others said Trump's joke represents yet another instance of embarrassment that accompanies his presidency.

@RVAwonk There are too many cringey moments in this Presidency to keep track of
— Joyce Alene (@Joyce Alene) 1542394393.0

Now we know what Trump considers to be "busy."

Trump presented the highest civilian honor to others of whom he is fond, though his choices raised some eyebrows.

In addition to Scalia, the six other recipients include:

“Eight years ago to 10 years ago, Trump was not what I consider to be a pillar of virtue,” Hatch said of Trump. “I think he has changed a lot of his life once he was elected. I think Trump is a much better person today than he was then.”

And the most controversial - Miriam Adelson, wife of billionaire casino titan Sheldon Adelson - and one of the biggest Republican donors in the country. Adelson helped persuade Trump to move the American Embassy in Israel to Jerusalem, after which Trump declared the city to be Israel's capital.

"Ms. Adelson, a physician and philanthropist, is hardly a household name," noted the Times on Friday. "But she is the spouse of Sheldon Adelson, a casino magnate, and multibillionaire. In 2016, the Adelsons provided badly needed backing for Mr. Trump, and in the recent midterm elections contributed more than $120 million to Republicans."