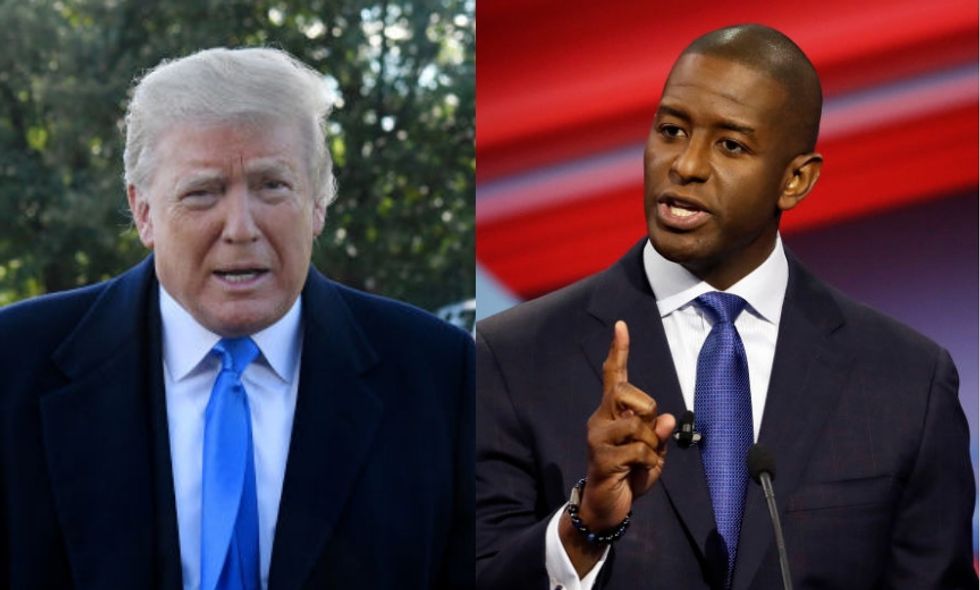 Despite recent calls for unity in the face of multiple attacks motivated by hatred, President Donald Trump took to Twitter on Monday morning with business as usual.

In Florida there is a choice between a Harvard/Yale educated man named @RonDeSantisFL who has been a great Congress… https://t.co/5U5PYI8Xfr
— Donald J. Trump (@Donald J. Trump) 1540824865.0

But Gillum - who has maintained a small but consistent lead over his opponent, Republican Ron DeSantis, since the two won their respective primaries - isn't taking Trump's attacks lying down.

And he's accusing Trump of being the absolute worst thing Trump could ever consider anyone to be: weak.

This echoes recent attacks Gillum has levied against Trump before when Trump failed to @ him on Twitter.

Gillum made similar statements during a televised debate, also dismissing DeSantis as a lackey for the president.

"Donald Trump is weak, And he performs as all weak people do: they become bullies and Mr. DeSantis is his acolyte. He's trying out to be the Trump apprentice at every turn. He's tweeting at him and he's talking to him. He's showing up. He's complimenting him."

@AndrewGillum @realDonaldTrump Already voted for you! Getting others to do the same! #BringItHome
— Warren Davis (@Warren Davis) 1540827062.0

And while Gillum received massive praise for his comeback against the president, Donald Trump was heavily criticized for his hypocrisy.

Many thought it was absurd and hypocritical that Donald Trump - who has often been accused of withholding payments to employees and contractors - would call an upstanding candidate a thief.

Florida's gubernatorial race has proven to be one of the most closely-monitored races in the nation, with many viewing Gillum as the progressive Democrats need. Meanwhile, DeSantis's obsessive admiration for the president has concerned voters everywhere. Shortly after both candidates won their respective primaries, DeSantis was on the receiving end of massive outcry after telling Florida voters to not "monkey this up" by voting for Gillum, who is African American.

As is typical for the largest swing state in the nation, all eyes will likely be on Florida on November 6th.