Donald Trump Just Lied About What the Judge in Paul Manafort's Sentencing Hearing Said About Russian Collusion, And We Have the Receipts 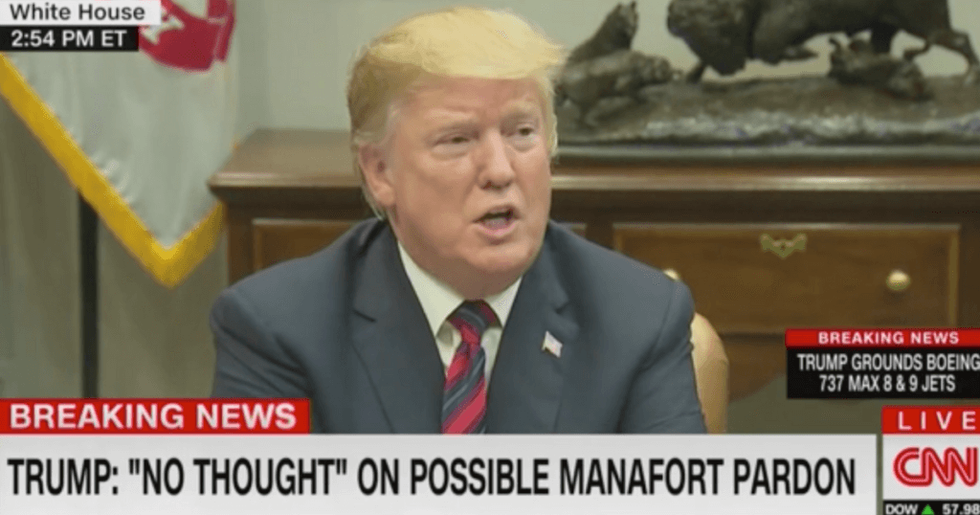 President Donald Trump on Wednesday falsely asserted that the judge in Paul Manafort's Virginia sentencing hearing vindicated his assertions that there was "no collusion" between his presidential campaign and Russia.

Manafort was sentenced to 43 months in prison for fraud unrelated to Russian collusion.

Ranting to reporters in the Oval Office, Trump dredged up his usual trope about how there was no collusion and that it was the Democrats who... well, you know.

Downing was shouted down by protesters screaming, "LIAR! THAT'S NOT WHAT SHE SAID!"

The protesters were correct. Trump and Downing are flat out lying. Full stop.

Here is what US District Judge Amy Berman Jackson in DC said at Manafort's sentencing hearing:

In fact, Jackson's remarks were the polar opposite of what Trump is claiming:

“The ‘no collusion’ mantra is also not accurate, because the investigation is still ongoing.”

Some believe Manafort is hoping for a presidential pardon.

Another sentencing, another statement by Manafort’s lawyer repeating Trump’s mantra of “no collusion,” and another… https://t.co/LamI4C5o3s
— Adam Schiff (@Adam Schiff) 1552499627.0

You know what? If Paul Manafort really wanted to accept responsibility for his actions, he'd declare at his sentenc… https://t.co/dZOcg60E97
— Seth Abramson (@Seth Abramson) 1552488648.0

Trump said he has "not given it a thought."

As the White House gaggle continued, Trump reverted to stale humblebrags about his Electoral College victory over Hillary Clinton in 2016. Note that Manafort was chair of the Trump campaign from May 19 to August 19, 2016.

"And you know it," Trump rambled on. "It was done and stated by the Democrats because they lost an election that they should have won, because the Electoral College it’s a big advantage for Democrats, not for Republicans. And they should have, and I ran the clock out."

“We ran the whole thing, ran up the east coast from North Carolina to Pennsylvania," Trump boasted, almost as if he was giving a hat tip to Manafort. "Then we go up to Wisconsin and Michigan, states that hadn’t been won for many, many years. We won those states."

Trump then blasted the Russia investigation, headed by Special Counsel Robert Mueller, as a "hoax."

This is quite the hill, Donald.

@RawStory It proved members of his campaign attempted to conspire with foreign agents to influence a US election (u… https://t.co/3EJl8qoHjo
— Trey W (@Trey W) 1552508083.0

Trump made a similar demonstrably false claim on Thursday after Judge TS Ellis of the Eastern District of Virginia sentenced Manafort to 47 months in prison.

Trump is living in opposite land. What Ellis actually said was that Manafort was “not before this court for anything having to do with collusion with the Russian government to influence this election.”

"Both the Judge and the lawyer in the Paul Manafort case stated loudly and for the world to hear that there was NO COLLUSION with Russia," Trump tweeted. "But the Witch Hunt Hoax continues as you now add these statements to House & Senate Intelligence & Senator Burr. So bad for our Country!"

Both the Judge and the lawyer in the Paul Manafort case stated loudly and for the world to hear that there was NO C… https://t.co/awiZEepZwl
— Donald J. Trump (@Donald J. Trump) 1552051846.0

“There is absolutely no evidence Paul Manafort worked in collusion with any government official from Russia," Downing proclaimed.

“I feel very badly for Paul Manafort,” Trump said. “I think it’s been a very, very tough time for him.”