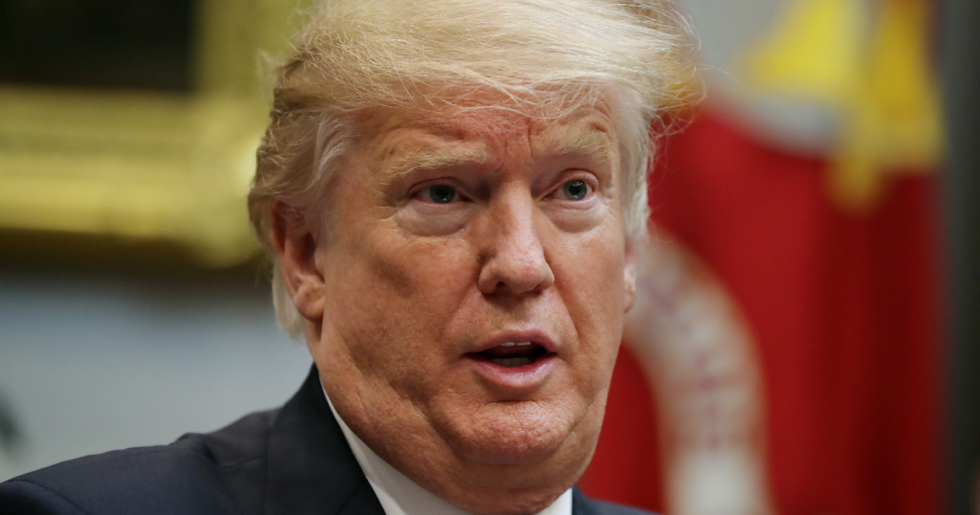 WASHINGTON, DC - JANUARY 23: U.S. President Donald Trump delivers remarks to reporters while participating in a roundtable about ‘fair and honest pricing in healthcare’ in the Roosevelt Room at the White House January 23, 2019 in Washington, DC. During the meeting Trump said 2018 was the first time in over 50 years that prescription drug prices declined. (Photo by Chip Somodevilla/Getty Images)

After former FBI Director Andrew McCabe revealed on Thursday that the Justice Department discussed invoking the 25th Amendment with members of President Donald Trump's cabinet, the president demonstrated he does not know anything about the 25th Amendment or really about how the constitution works.

Trump took to Twitter Thursday night to repeat a bonkers line from Alan Dershowitz during an appearance on Fox News (of course):

“'Trying to use the 25th Amendment to try and circumvent the Election is a despicable act of unconstitutional power grabbing...which happens in third world countries. You have to obey the law. This is an attack on our system & Constitution.' Alan Dershowitz. @TuckerCarlson"

“Trying to use the 25th Amendment to try and circumvent the Election is a despicable act of unconstitutional power… https://t.co/yaOJ2xZj7k
— Donald J. Trump (@Donald J. Trump) 1550200583.0

Alan Dershowitz is a Harvard Law professor and Trump defender whose complaint to Fox News is a total distortion of the 25th Amendment, which establishes the means to remove a president who is no longer fit to serve.

The 25th Amendment, does not, however, list specific circumstances under which it should be invoked. Instead, it leaves the decision up to "the Vice President and a majority of either the principal officers of the executive departments or of such other body as Congress."

Pause for a second to appreciate where we are.

@realDonaldTrump @TuckerCarlson If something is in the Constitution, can it be unconstitutional? Asking for a friend. 🤔
— Rogue NASA (@Rogue NASA) 1550201268.0

@realDonaldTrump Speaking of Circumventing the Constitution…. You mean like declaring a national emergency to atte… https://t.co/KOXb7GVwMi
— Ryan Hill (@Ryan Hill) 1550241561.0

McCabe's revelation must have struck a nerve.

@realDonaldTrump @TuckerCarlson You worried about your own cabinet voting that you're mentally unfit for office?
— William LeGate (@William LeGate) 1550202522.0

Author and lawyer Seth Abramson thinks there is something sinister afoot.

"What Alan Dershowitz said to Tucker Carlson has nothing to do with the Constitution or rule of law, but with inoculating Trump against the findings of a wholly legal and responsible federal criminal investigation by implying, without evidence, that its intent is an illegal coup."

What Alan Dershowitz said to Tucker Carlson has nothing to do with the Constitution or rule of law, but with innocu… https://t.co/W4mueFZOqM
— Seth Abramson (@Seth Abramson) 1550243725.0

This has people asking what on Earth is going on with Dershowitz.

@SethAbramson Can we get Dershowitz disbarred? It seems like this is something that should get a lawyer stripped o… https://t.co/ZmVw8zFWtr
— Chris Sanyk (@Chris Sanyk) 1550243874.0

@SethAbramson Seth, Nothing Alan has said for 18 months approaches sanity. Has he lost it or is being leveraged by the Epstein issue?
— mfleener (@mfleener) 1550244285.0

@SethAbramson So we're supposed to believe that collusion, conspiracy or whatever crimes Trump and his fellow trait… https://t.co/gHXg3EEq4H
— Doc (@Doc) 1550245555.0

In other words, crimes are not crimes.