Don Lemon Can't Stop Laughing at This Awkward Clip of Paul Manafort Answering Whether Trump Has Any Financial Ties to Russia, and We See Why 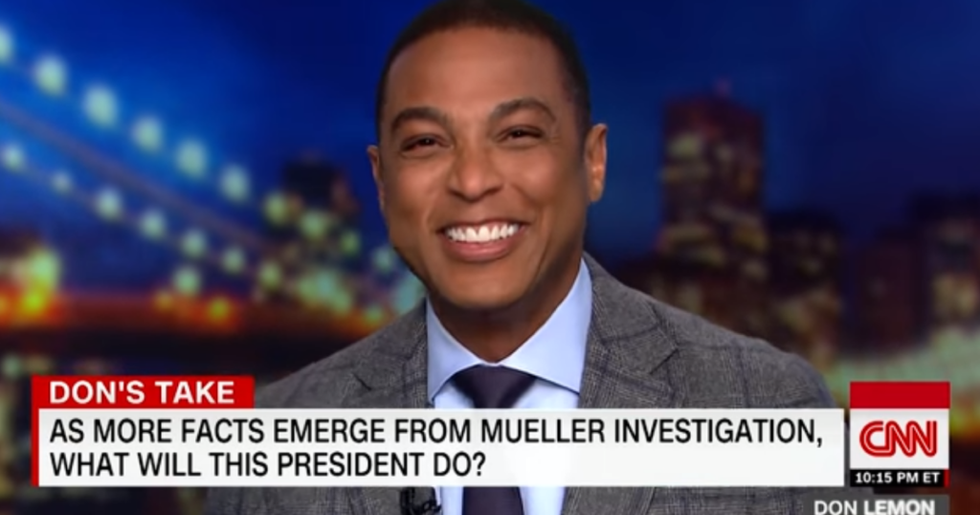 CNN's Don Lemon couldn't get enough of a 2016 clip of Paul Manafort struggling to defend candidate Donald Trump. On Thursday, Lemon began laughing uncontrollably while recapping the tsunami of Trump-Russia news that dominated headlines all week.

“So to be clear," asked O'Donnell, "Mr. Trump has no financial relationships with any Russian oligarchs?”

"So awkward," Lemon chuckled as he replayed the clip.

“That was really, really awkward,” Lemon said. “I still have no idea what he said there. But doesn't that just sum up all of this up?"

Watch below. The Manafort segment appears at 6:20.

The O'Donnell-Manafort exchange started making rounds on Twitter Thursday following news that Trump's former fixer Michael Cohen pleaded guilty to lying to Congress about a Trump Tower Moscow deal that was in the works during the 2016 campaign.

@galan_official @JuddLegum @PreetBharara The stumbling was him trying not to say yes because he knew that was a lie.
— Jobe (@Jobe) 1543538510.0

Lemon wasn't the only one laughing.

The recording is especially juicy now because Manafort was busted last week for double-dealing behind Special Counsel Robert Mueller's back as plea deals were negotiated over the summer. Manafort was convicted of eight counts of tax and bank fraud in August.

He also entered two guilty pleas for conspiracy and money laundering in September. It was during this time, Mueller's office says, that Manafort lied to investigators.

At least lie with some dignity, dude.

Manafort's sentencing hearing will be scheduled on Friday.

"As more facts emerge from the Mueller investigation," Lemon said, "what will the president do?"