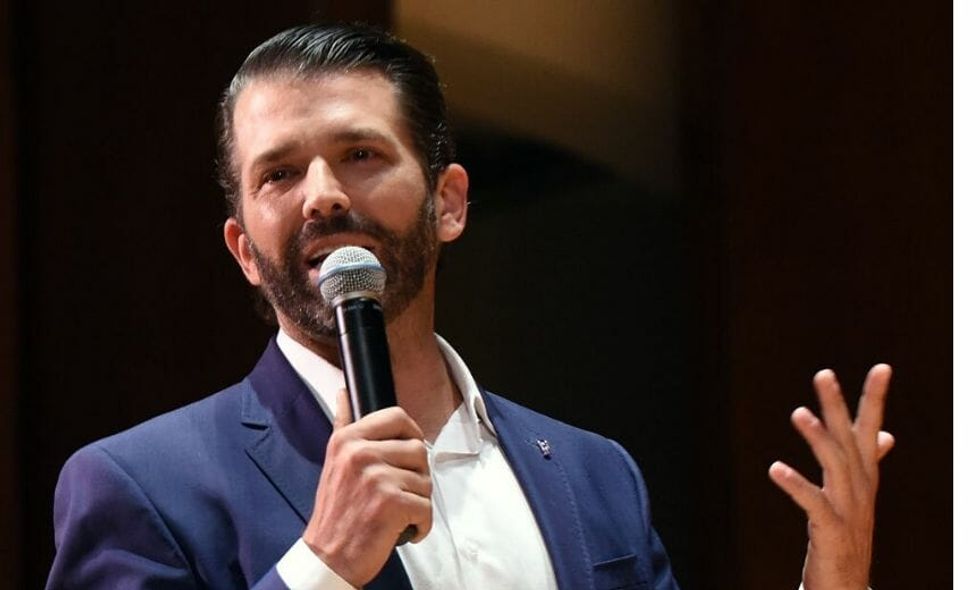 President Donald Trump's eldest son, Donald Trump Jr., was heckled by members of a conservative student group at an event promoting his new book, Triggered, prompting him and his girlfriend, Kimberly Guilfoyle, to leave the event an hour and a half early.

Predictably, there were anti-Trump protestors outside of the event at the University of California, but inside the event, which was organized by Trump-supporting Turning Point USA, the young MAGA crowd turned against Don Jr. after learning that he and Guilfoyle would not be taking questions.

The crowd soon broke out in chants of "Q and A! Q and A!" as a flummoxed Trump Jr. tried to figure out a course of action.

"The reason it doesn't make sense to do the Q and A is not because we're not willing to talk about the questions, cause we do, it's because people hijack it with nonsense looking to go for some sort of soundbite. You have people spreading nonsense, spreading hate, to try and take over that room."

Guilfoyle, meanwhile, may have made things worse by chastising the crowd for being an embarrassment to their parents with their behavior.

“No, it's because you're not making your parents proud by being rude and disruptive and discourteous."

After reverting back to talking points about job growth under Trump, the pair cut the event short, opting for the book signing next door instead.

Trump Jr.'s book is meant to criticize Liberals for what he believes is an opposition to free speech and a platform of hatred and intolerance.

Some found his refusal to answer questions to be quite rich considering the premise of his book.

Junior getting protested for not being alt-right enough is not something I had on my dystopian hellscape bingo card. https://t.co/bbmipMhkb0
— Molly Jong-Fast (@Molly Jong-Fast) 1573473169.0

Trump Jr's book tour about how the left is opposed to free speech did not work out so well when he went to a campus… https://t.co/PTHlP9torA
— Don Moynihan (@Don Moynihan) 1573448066.0

Some believe that the MAGA crowd is beginning to turn on each other, with one far-Right faction wanting to stop all immigration and pursue what they claim is an "America First" agenda, a faction that doesn't find Trump Jr. and his book tour sponsor, Turning Point USA, to be radical enough.

Junior getting protested for not being alt-right enough is not something I had on my dystopian hellscape bingo card. https://t.co/bbmipMhkb0
— Molly Jong-Fast (@Molly Jong-Fast) 1573473169.0

@MollyJongFast Not surprising, you try and ride the pony of racism and it turns into a tiger that can not be controlled
— mktsutherland (@mktsutherland) 1573480492.0

Naturally, Trump Jr. still claimed that the event was a total success.