The DOJ's amicus brief, filed yesterday, is the latest attack on LGBTQ people and their livelihoods. 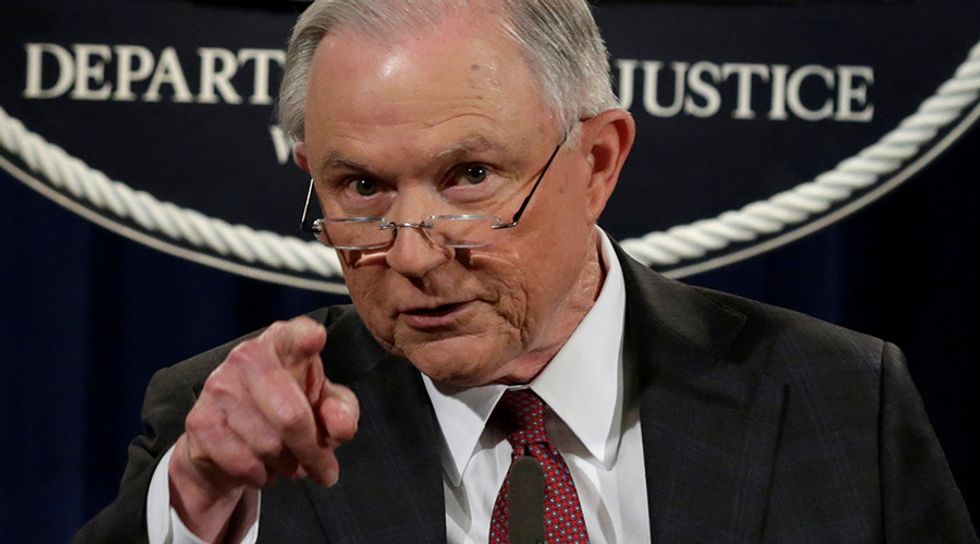 The Department of Justice argued in an amicus brief yesterday that the landmark Civil Rights Act of 1964 does not protect LGBTQ workers from discrimination based on sexual orientation. The move came scarcely 12 hours after President Donald Trump announced he would ban transgender individuals from serving in the military in any capacity.

Attorneys with the Justice Department, arguing under Attorney General Jeff Sessions told the U.S. Court of Appeals for the Second Circuit that the agency does not believe LGBTQ workers fall under Title VII of the Civil Rights Act, which "makes it unlawful to discriminate against someone on the basis of race, color, national origin, sex (including pregnancy and gender identity) or religion."

DOJ attorneys filed the brief as part of a lawsuit filed by Donald Zarda, who is now deceased. Zarda, a former skydiving instructor, claimed he was fired for his sexual orientation. Lambda Legal summarizes the case:

In September 2010, [Donald] Zarda, a skydiver, filed a lawsuit in U.S. District Court for the Eastern District of New York against his former employer, Altitude Express, Inc, alleging that the company violated the Civil Rights Act by discriminating against him because of his sexual orientation. The district court rejected his claim, saying that the Civil Rights Act does not protect him for bias he endured for being a gay man. Tragically, in October 2014, Zarda died in a base jumping accident in Switzerland.

In January 2017, Gregory Antollino argued an appeal on behalf of Zarda’s estate asking a three judge panel of the Second Circuit to revisit its precedent and hold that sexual orientation discrimination is a form of sex discrimination and therefore illegal under the Civil Rights Act. The three-judge panel denied Zarda’s claim in April 2017, but held that Zarda would be entitled to a new trial if the full Second Circuit agreed with his arguments about Title VII of the Civil Rights Act.

In its amicus brief in the case, the American Civil Liberties Union writes that the Supreme Court

has explained that sex discrimination occurs whenever an employer takes an employee’s sex into account when making an adverse employment decision. Courts have applied this principle to countless forms of employer bias, from cases involving a ban on hiring mothers of preschool-aged children to bias against Asian-American women to the failure to promote a Big Eight accounting firm partnership candidate because she was considered to be 'macho.' Time and again, courts have refused to allow generalizations about men and women – or about certain types of men and women – to play any role in employment decisions.

The Justice Department argues the opposite. Its brief reads, in part:

The sole question here is whether, as a matter of law, Title VII reaches sexual orientation discrimination. It does not, as has been settled for decades. Any efforts to amend Title VII’s scope should be directed to Congress rather than the courts...

The DOJ's brief also challenges a 2015 decision by the Equal Employment Opportunity Commission (EEOC) which found that Title VII forbids discrimination based on sexual orientation. The DOJ argues that the EEOC does not determine the application of the equal rights law. "The EEOC is not speaking for the United States and its position about the scope of Title VII is entitled to no deference beyond its power to persuade,” the DOJ brief reads.

In response to the news, several LGBTQ rights groups and activists issued statements via social media.

Today this administration has really proved that they're definitely not friends to LGBTQ people. https://t.co/BY4REg8PWC
— GLAAD (@GLAAD) 1501113095.0

“Attacks against the LGBTQ community at all levels of government continue to pour in from the Trump-Pence Administration,” said Sarah Warbelow, HRC's Legal Director. “In one fell swoop, Trump’s DOJ has provided a roadmap for dismantling years of federal protections and declared that lesbian, gay, and bisexual people may no longer be protected by landmark civil rights laws such as the Fair Housing Act, Title IX, or Title VII. For over a decade, courts have determined that discrimination on the basis of LGBTQ status is unlawful discrimination under federal law. Today's filing is a shameful retrenchment of an outmoded interpretation that forfeits faithful interpretation of current law to achieve a politically-driven and legally specious result.”