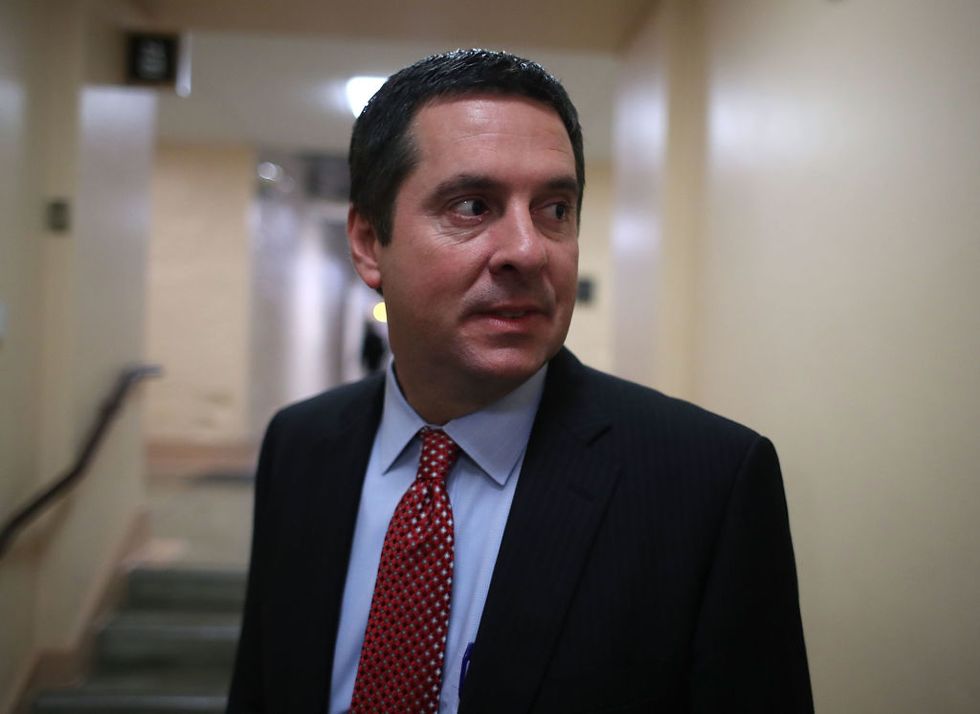 Leaked audio recordings reveal that Representative Devin Nunes (R-CA) admitted that collusion can be a crime during a private fundraiser last month. In the recordings, which were obtained by MSBC's The Rachel Maddow Show, Nunes is heard explaining why colluding with a foreign power can be considered criminal activity.

Now if somebody thinks that my campaign or Cathy’s campaign is colluding with the Chinese, or you name the country, hey, could happen, it would be a very bad thing if Cathy was getting secrets from the Portuguese, let’s say, just because I’m Portuguese, my family was. So Cathy was getting secret information from the Portuguese. You know, may or may not be unusual. But ultimately let’s say the Portuguese came and brought her some stolen emails. And she decided to release those. Okay, now we have a problem, right? Because somebody stole the emails, gave ‘em to Cathy, Cathy released ‘em. Well, if that’s the case, then that’s criminal.

The audio was recorded by a member of the progressive group Fuse Washington. The individual then turned over the recordings to The Rachel Maddow Show, which aired them last night.

Despite these comments, Nunes still lashed out at Special Counsel Robert Mueller and his probe into whether President Donald Trump's campaign, with the help of Russian operatives, worked to undermine and subvert the 2016 presidential election.

Nunes refers to tweets the president wrote earlier this week: Trump quoted “Fox & Friends”––one of his favorite news programs––to support his new line of defense: That collusion, that is, in this case, secret and illegal cooperation with the Russian government, did happen, but that it was the fault of former Democratic opponent Hillary Clinton and her campaign.

Still, Nunes worries that the president's many scandals––and the public's outrage at the Republican Party for failing to rein him in––could cost the GOP their majority in both houses of Congress. All of this becomes more difficult for Republicans to stave off should Democrats seize control of the House of Representatives in November's midterm elections.

So therein lies, so it’s like your classic Catch-22 situation where we were at a – this puts us in such a tough spot. If Sessions won’t unrecuse and Mueller won’t clear the president, we’re the only ones. Which is really the danger. That’s why I keep, and thank you for saying it by the way, I mean we have to keep all these seats. We have to keep the majority. If we do not keep the majority, all of this goes away.

Nunes also used an exchange with an audience member to explain why efforts to impeach Deputy Attorney General Rod Rosenstein had stalled. Nunes said that an impeachment would delay the Senate's confirmation of Brett Kavanaugh to the Supreme Court.

The exchange is as follows:

AUDIENCE MEMBER: “But also, on things that came up in the House on Rosenstein impeachment thing. And it appears from an outsider that the Republicans were not supported.

NUNES: “Yeah, well, so it’s a bit complicated, right? And I say that because you have to, so we only have so many months left, right? So if we actually vote to impeach, okay, what that does is that triggers the Senate then has to take it up. Well, and you have to decide what you want right now because the Senate only has so much time. Do you want them to drop everything and not confirm the Supreme Court justice, the new Supreme Court justice? So that’s part of why, I don’t think you have, you’re not getting from, and I’ve said publicly Rosenstein deserves to be impeached. I mean, so, I don’t think you’re gonna get any argument from most of our colleagues. The question is the timing of it right before the election.”

The recordings quickly made the rounds on social media after The Rachel Maddow Show's reveal, and Nunes was largely criticized for suggesting that a Republican majority would be necessary to protect the president from Mueller's investigation.

So just to put this in context: Devin Nunes has spent the last year and a half trying to undermine an investigatio… https://t.co/jW2TdWhgqp
— Ahmed Baba (@Ahmed Baba) 1533784108.0

Nunes, a hardline conservative, has been one of the president's more vigorous defenders. Earlier this year, the much-debated Nunes memo, which alleges abuses of covert surveillance powers by the FBI, incited a debate as to whether its contents would vindicate the president. Multiple members of Congress, including Representative Trey Gowdy (R-S.C.), himself a member of the House Permanent Select Committee on Intelligence, disagreed.

The Nunes memo has fueled suggestions from members of the far right that the “rumor” of the Trump administration’s collusion with Russian operatives first began to make waves after Hillary Clinton’s campaign commissioned the now infamous dossier––as part of its own collusion with the FBI. In fact, that suggestion mischaracterizes the dossier. Its existence is significantly more complicated than that.

President Trump has continued to insist that the controversial dossier containing allegations of collusion with the Russian government compiled by former British intelligence agent Christopher Steele was not just “disproven” but “paid for by Democrats.” Last month, Senator Dianne Feinstein (D-CA) released the unclassified transcript of the interview last August by Judiciary Committee members with Glenn Simpson, a founder of the research firm Fusion GPS, which the Clinton campaign retained to do opposition research on Trump. Simpson’s testimony indicates that Steele was so disturbed by his discoveries that he chose to alert the FBI.