Democrats Retake the House of Representatives 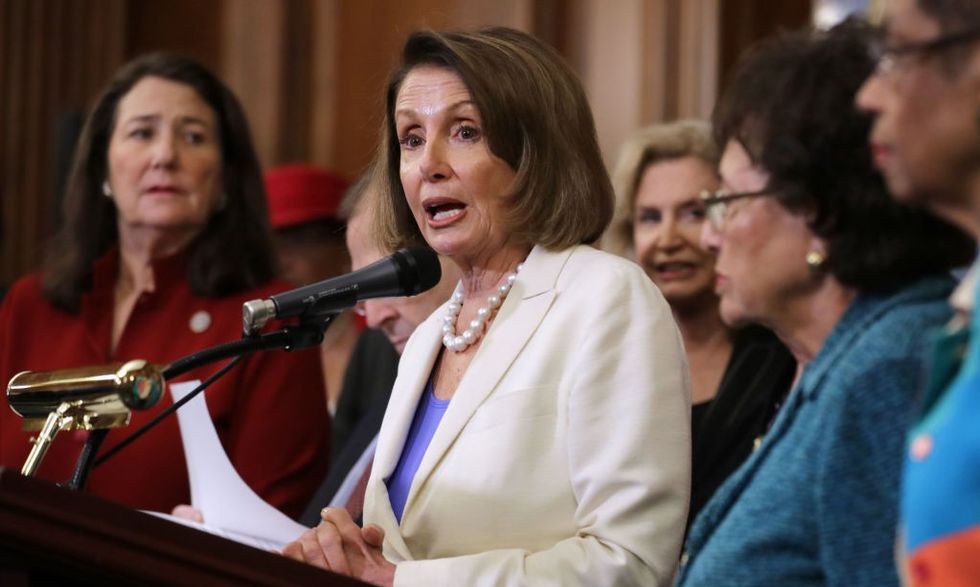 House Minority Leader Nancy Pelosi (D-CA) (C) is joined by Democratic members of the House of Representatives in the Rayburn Room in the U.S. Capitol September 26, 2018 in Washington, DC. (Photo by Chip Somodevilla/Getty Images)

With results still coming in, newsmedia projected the Democratic Party fulfilled their goal of flipping the United States House of Representatives from red to blue.

And at almost 3:00am EST Wednesday morning, it became official when Democrats were declared the winners in 218 House seats. The 116th Congress will convene in January 2019 with Democrats in control of the House.

The House flipped from blue to red in the 2012 presidential election year. The 114th and 115th Congress saw Republicans controlling both houses after successfully taking control of the Senate from the Democrats during the 2014 midterm election.

MSNBC first projected a Democratic flip of the House with CNN, NBC and The New York Times following soon after.

Democrat Jennifer Wexton of Virginia beat incumbent Republican Barbara Comstock of Virginia to flip the first seat in the House.

She was soon followed by Democrat Donna Shalala winning the seat of retiring Republican Representative Ileana Ros-Lehtinen in Florida.

Rashida Tlaib of Michigan and Ilhan Omar of Minnesota become the first Muslim women to win seats in Congress as well.

Maine became the first state in the nation to begin using ranked choice voting which allows voters to rank all candidates in order of their preference on the ballot, making a 1st, 2nd, 3rd, etc... choice. Those rankings are used to decide the winner if no candidate receives over 50 percent of the initial tally. Once all precincts are at 100 percent reported, the instant runoff process begins using voters ranked choices.

"Today is more than about Democrats and Republicans. It's about restoring the Constitution's checks and balances to… https://t.co/kHlIeWkDKK
— CNN (@CNN) 1541566633.0

People blamed outgoing Speaker of the House Paul Ryan—who retired rather than run for reelection.

While the President referred to the night as a success despite losses in the House and in Governor's races.

Many also projected what a blue House of Representatives would mean for the Trump administration.

BREAKING: Checks and Balances coming to Congress. Democrats take back US House of Representatives. @RepAdamSchiff n… https://t.co/ObdftloE1E
— The JENN MIC! (@The JENN MIC!) 1541562276.0

Winning candidates took to Twitter to thank their supporters and congratulate each other.

.@RashidaTlaib, @AyannaPressley and @IlhanMN are coming to Congress to work with me, IN THE MAJORITY, which is the… https://t.co/qUkT2FtBWY
— Pramila Jayapal (@Pramila Jayapal) 1541567995.0

By the next afternoon, Democrats flipped 29 seats with 222 House seats designated as won by a Democrat. Over a dozen seats still had no declared winner by late Wednesday afternoon.