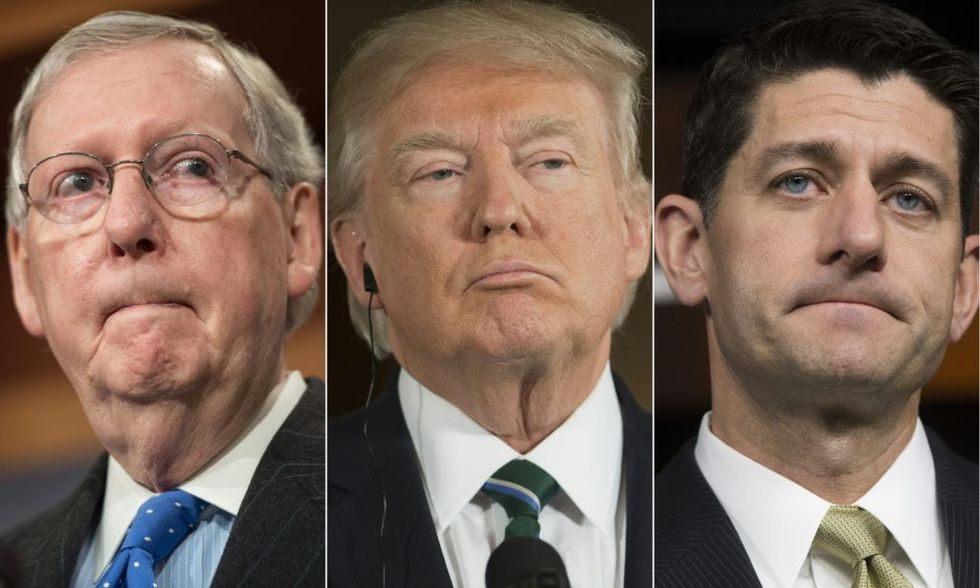 COMBO) This combination of pictures created on August 24, 2017 shows US Senate Majority Leader Mitch McConnell (L)on April 7, 2017, US President Donald Trump on March 17, 2017 and Speaker of the House Paul Ryan (R) June 29, 2017 in Washington, DC. US President Donald Trump turned up the heat August 24, 2017 on Republican leaders in Congress accusing them of foot-dragging on his key priorities, in an intensifying feud that puts his policy agenda in jeopardy. The president castigated both the Senate majority leader Mitch McConnell and Paul Ryan, the speaker of the House of Representatives, for not taking his advice to tie crucial debt ceiling legislation to a popular veterans bill that recently passed Congress. Both McConnell and Ryan have sought to downplay divisions with Trump -- and talk of either any shutdown or a debt default, which would be the first in US history / AFP PHOTO / NICHOLAS KAMM AND SAUL LOEB (Photo credit should read NICHOLAS KAMM,SAUL LOEB/AFP/Getty Images)

A new poll released on Sunday from NBC News and The Wall St. Journal spells some trouble for President Trump and Republicans. Trump's approval rating slipped a net 8 points since March, back down to 39%:

Additionally, Democrats hold a 7 point advantage on the generic congressional ballot, signaling how people intend to vote for Congress in November.

This is down 3 points since March:

But it's another number that should keep Republicans hoping to win this November up at night: the enthusiasm gap.

NBC/WSJ found that 66% of Democrats have "high interest" in this year's election versus just 49% of Republicans who feel the same way.

The significance of this number? It's exactly the same as the enthusiasm gap Republicans held over Democrats in 2010.

As the poll makes clear:

"That's a reversal from the merged NBC/WSJ polling data in 2010 -- a wave year for Republicans -- when 66 percent of Republicans expressed a high level of interest, compared with 49 percent for Democrats."

In 2010, Republicans won 63 House seats, retaking the majority. In 2018, Democrats need to pick up just 24 seats to win back control of the chamber.

Perhaps even more concerning is that of those who have a high interest in the election, 21% favor Democrats to retake the House.