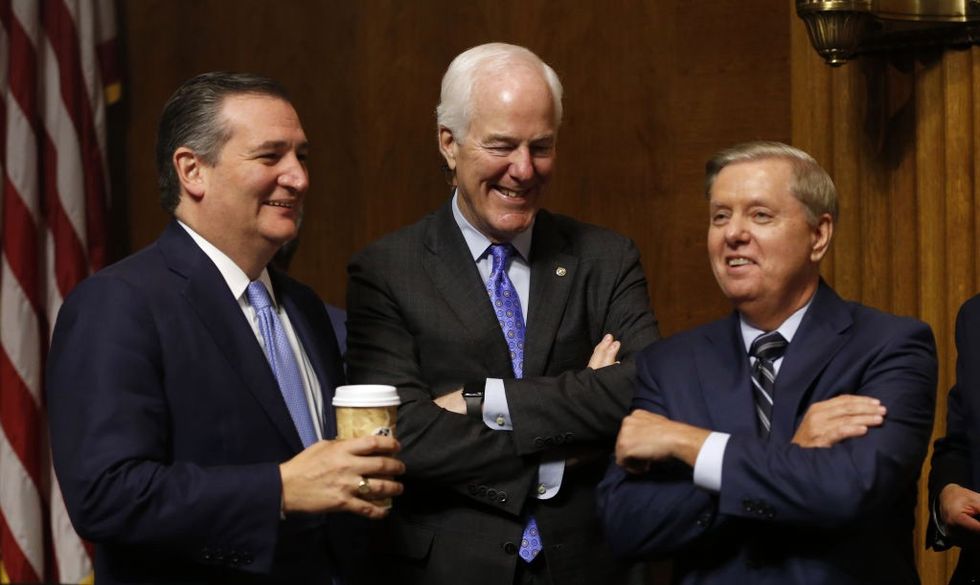 Republican Senators Ted Cruz, John Cornyn, and Lindsey Graham chat during a break in the testimony of Dr. Christine Blasey Ford during Senate Judiciary Committee confirmation hearings on the nomination of Brett Kavanaugh to be an associate justice of the Supreme Court of the United States, on Capitol Hill September 27, 2018 in Washington, DC. (Photo By Michael Reynolds-Pool/Getty Images)

The idea of the "paid protester" is one Donald Trump floated while he campaigned for President. Trump maintained anyone opposing him at his rallies were simply paid to be there.

It is a narrative adapted from conspiracy theorists who dismiss events that do not fit into their world view—like school shootings—as the work of paid actors. Rather than admit considerable numbers of people vocally opposing him, the President accuses them of being paid to protest.

The GOP adopted their party leader's coping mechanism as well. When protesters demonstrate against their policies or actions, Republican members of Congress and the Trump administration try to delegitimize their constituents' grievances by claiming they were paid protesters.

On Saturday, when the GOP pushed through the confirmation of Trump's SCOTUS nominee to a lifetime seat on the bench, many people protested in Washington DC and around the country. Senate Judiciary Committee member, Republican Senator John Cornyn of Texas, tried to use the familiar tactic to dismiss the protests as not representing the views of millions of United States voters.

"Rollcall: 101 people were arrested at the Capitol, many paid and orchestrated to intimidate Senators and their staff."

But Chief Strategist/co-founder of A March for Our Lives, journalist and documentary filmmaker Matt Deitsch responded to Cornyn's tweet with a few facts of his own. He posted:

“Rollcall: Senator Cornyn is owned by…

John, the only person paid and orchestrated to spread fear is you.”

Deitsch's tweet refers to some of the lobbyists and corporate donors that contributed money to Senator Cornyn. Deitsch was not alone in his feedback for Cornyn.

Many people responded directly to Cornyn's tweet. Many called out his message for what it was.

@CapShower @JohnCornyn It’s the new normal in America. We even have a conspiracy-theorist on the Supreme Court. I… https://t.co/vcG7R7HVRw
— Lori Ginsberg (@Lori Ginsberg) 1538965173.0

@JohnCornyn It was the day of the McCain viewing. The REPUBLICAN STAFFERS, not Dems, sounded the alarm on… https://t.co/oYUItvSKiX
— LatinaChic 🌊 (@LatinaChic 🌊) 1538827981.0

@JohnCornyn What proof do you have that the protesters are paid? That is a favorite charge of Trump - is there any… https://t.co/NPLZ2s4jF2
— Patricia Foster (@Patricia Foster) 1538957878.0

@JohnCornyn You should be made to provide proof of who you think were paid instead of throwing wild accusations aro… https://t.co/6gkooJSwXM
— Darnell Moses (@Darnell Moses) 1538946705.0

While others echoed Deitsch.

The March for Our Lives cofounder was not alone in looking at Cornyn's own payments received data.

Some of those who protested also had a message for the Senior Senator from Texas.

@JohnCornyn We weren’t paid and orchestrated. We are Pissed and Organized. You will have plenty of time to reflect… https://t.co/HBBY2P0jLl
— Jan Porter (@Jan Porter) 1538977454.0

And more than a few of Cornyn's constituents had a message for their Senator too.

Senator Cornyn has yet to respond to Deitsch or any of his other critics regarding his claim.