The Russian Embassy Just Tweeted About 'Agreements' Reached by Trump and Putin in Helsinki, and Democrats Want Answers 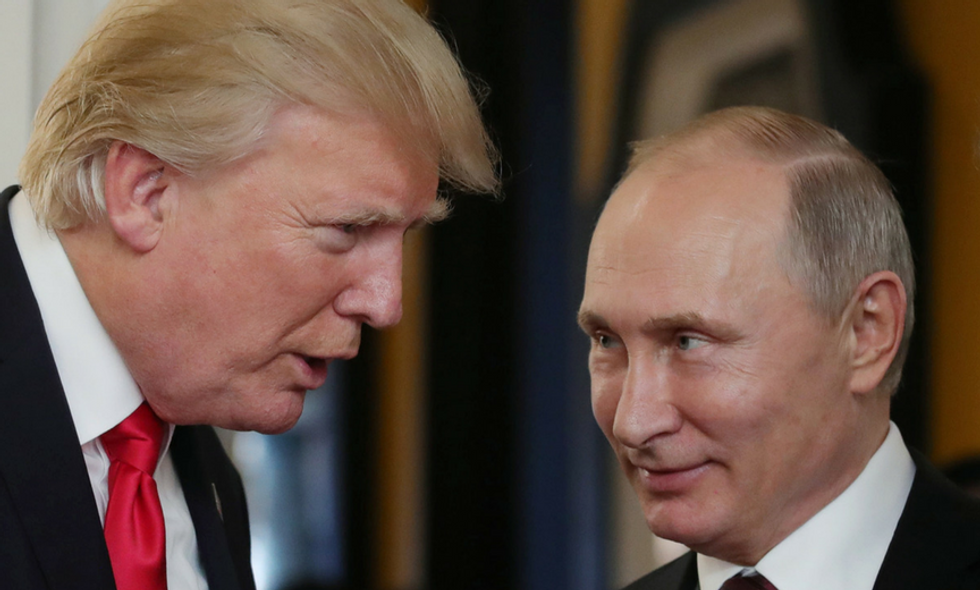 The Russian Embassy issued a startling tweet on Tuesday, announcing that the Russian Defense Ministry is ready to implement military agreements reached between President Donald Trump and Russian President Vladimir Putin in Helsinki on Monday.

The Russian Defense Ministry @MoD_Russia🇷🇺 is ready for the practical implementation of agreements in the area of g… https://t.co/8dy3sTDQ7a
— Russia in USA 🇷🇺 (@Russia in USA 🇷🇺) 1531862106.0

The embassy included a link to a longer statement on Facebook:

The United States National Security Council, however, has yet to confirm which agreements took place between the two leaders. When asked by CNN to elaborate on the agreements, an NSC spokesperson said the council was "still reviewing the discussion."

Because there is no transcript of the closed-door meeting between Putin and Trump, and because the only others present were translators, the agreements the Russian Defense Ministry seems eager to implement are as of yet inaccessible to the public.

The Ministry's spokesman, Major General Igor Konashenkov, told reporters that the ministry is

ready to intensify contacts with American colleagues at the level of the General Staffs and through other available channels of communication to discuss the extension of the START treaty, the interaction in Syria, and other topical issues of military security.

It wasn't until later in the day, at a White House Press Briefing led by Press Secretary Sarah Huckabee Sanders, that the White House vaguely denied the claims, insisting that there was "some conversation," but no official agreement.

Democratic lawmakers want to know what was said in that meeting.

Chuck Schumer: "Where are the notes from that meeting? What did President [Trump] agree to? Can we have the transla… https://t.co/DacEWzcX0v
— Kyle Griffin (@Kyle Griffin) 1531862718.0

Many others took to Twitter to express their outrage.

It's frightening that Trump and Putin made some sort of "military agreement" and Russia's defense minister is VERY… https://t.co/FeiHMg6jn6
— Alternative NOAA (@Alternative NOAA) 1531895257.0

"The National Security Council would not confirm what Trump had agreed to in the one-on-one with Putin." WTF is go… https://t.co/gDTk4hrzC5
— Ann MacGibbon (@Ann MacGibbon) 1531924526.0

Now Trump and Putin have agreed on some sort of military alliance during a private, two-hour meeting https://t.co/2VgLGgzwyq
— Sarah Kendzior (@Sarah Kendzior) 1531839407.0

Many are speculating what this agreement could look like.

One issue mentioned directly by Konashenkov was the extension of the Strategic Arms Reduction Treaty (START), a U.S.-Russia agreement first signed in 1991 to implement a gradual reduction and increased oversight on the military arms of both countries.

With other conflicting US-Russian interests like Syria and Crimea at stake, some Americans are calling for one of the translators in the closed door meeting to testify.

If it was a “great success” you should have no problem making your translator available to tell Congress all about… https://t.co/nnp6XRq6tC
— Rep. Don Beyer (@Rep. Don Beyer) 1531874865.0

"Big results to come," says @realDonaldTrump for which there is only one other witness. The US State Dep't translat… https://t.co/4L7eXBbBld
— Lawrence Surtees (@Lawrence Surtees) 1531915431.0

Trump publicly siding with Putin against his own intelligence agencies--which he's attributing to misspeaking--indicates to many that the president can't be trusted to formulate military and tactical agreements with Russia that will remain within the interests of the United States. In addition to the outrage of many Americans, Russian media is pleased with Trump's willingness to bow to Putin. The country waits nervously to learn just what it was the president agreed to.