Former Reagan Budget Director Just Called Donald Trump a 'Madman' Live on Fox Business, and the Host's Attempt to Prove Him Wrong Did Not Go Well 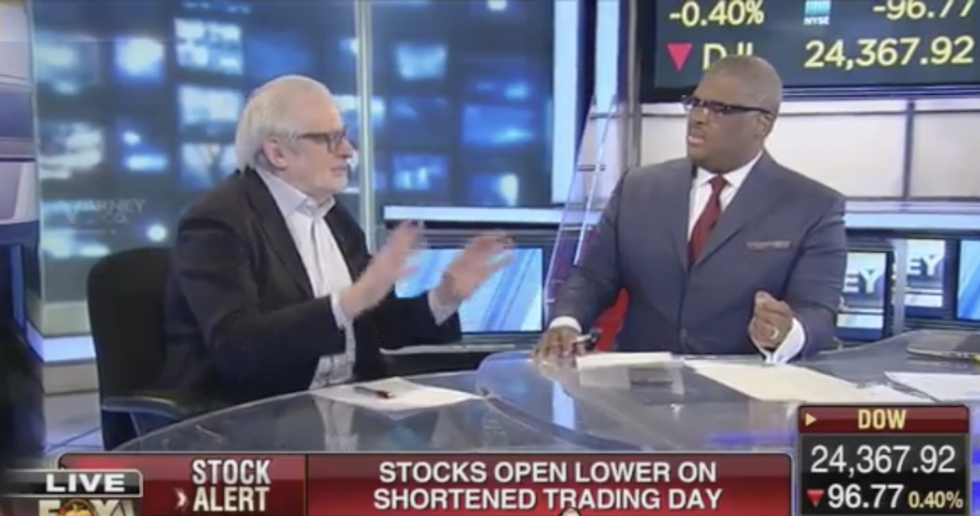 Stockman told host Charles Payne that the economy, which Trump routinely touts as the best and strongest in history (it is not), is at risk for a crash because Trump is acting "like a madman."

"How far down do we go from here?" Payne asked.

"I have no idea but the foundation is not stable," replied Stockman.

“We’ve got a perfect storm of a madman in the White House who’s pursuing trade wars, border wars, a fiscal policy that is totally out to lunch, and attacking the fed.”

Payne fired back, as only Fox Business can.

"Let me just stop you, before you run them all, let's just get one at a time," Payne interjected. “It’s kind of harsh to call President Trump a madman.”

But Stockman stood his ground.

"Oh," Stockman needled at Trump, "absolutely he is."

@crooksandliars @MalcolmNance Thank you David Stockman. Does Fox not vet its guests? I would think Stockman has bee… https://t.co/x8Zzc0Qiyc
— Karen Gates (@Karen Gates) 1542996182.0

As the two men continued to spar, Payne tried to deflect the conversation when he falsely claimed that China is itching to start a war with the United States.

Trump is "fighting back against unfair trade, intellectual property theft," and "a country that's building unmanned militarized islands." Payne continued to rail against China, whom he accused of having "imperialist ambitions" and attempting to "colonize the world through debt-trapped loans."

Payne asked Stockman if "we should be pushing back against China."

No one could put it in simpler terms or say it slower so even the simplest of simpletons might understand This eco… https://t.co/NjhN4DPOG0
— Bill Adkins (@Bill Adkins) 1542999050.0

"No," Stockman humorously scoffed. "China is not a threat to us whatsoever. If they want to waste their money on sand castles in the South China Sea, be our guest.”

@crooksandliars @MalcolmNance Don't know which bit is my favorite when Payne says, I know it was really difficult… https://t.co/IzvzvFyWj2
— Allison Jill (@Allison Jill) 1542998159.0

"China's economy is a house of cards," Stockman said. "It's got $40 billion of debt. It is the buildest speculative building spree in history."

He added: "Without our export markets, without 4,000 Walmarts and everything else in America, their economy would collapse. They don't dare threaten us."

Payne rebuffed Stockman by saying China's "main goal will be to go to war with America."

Stockman laughed that off too.

"If you believe this you should sell everything in sight," Stockman said, "because if there is a war between the U.S. and China the whole world financial system will crash, burn beyond anything you saw in the 1930's."

After an additional redundant back-and-forth, Stockman concluded that Trump is "totally out to lunch."

@thomascavaness @realDonaldTrump @GOP The Republicans ALL Know that Trump is a Psychotic Madman, and traitor. But t… https://t.co/UuzNq2f7Ds
— David Barkin (@David Barkin) 1543002482.0

@realDonaldTrump @senatemajldr @senchuckschumer Donald Trump is the same person he always was. This is on YOU, Rep… https://t.co/Kte4MUgi19
— Dreamweasel (@Dreamweasel) 1542977897.0

Let's all be grateful for arbiters of truth this Thanksgiving weekend.